Forum rules
Before posting critique in this forum, you must read the following thread:
Post Reply
87 posts

I recently got a shot of inspiration on drawing possible portraits for the Demons in IftU. Depicting them according to their descriptions and Shadowmasters sprites, or as I imagine it. These here are the basic demons.

The shapes on the female demons back are supposed to be undeveloped wings...

I took a small liberty with the curly hair there, hope it doesn't conflict with the lore.

Well, if you see this Shadowmaster, then give me your blessing if you want me to continue.

About the Undead sprites, I'll get around to them, sometime. 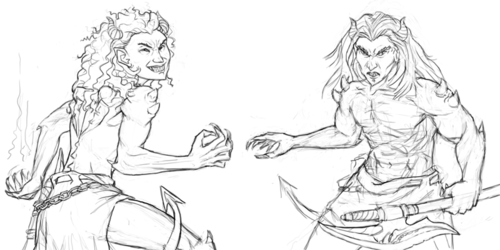 Sleepwalker wrote:Well, if you see this Shadowmaster, then give me your blessing if you want me to continue.

*thumbs up*
Author of the unofficial UtBS sequels Invasion from the Unknown and After the Storm (now available for Wesnoth 1.14.x and 1.15.4+).
Top

More art for IftU! Yay! Very demon-ish and I really like the undeveloped wings on her back!

But I'm not so sure about her head's position, I can turn my head like that but it's really uncomfortable… Plus her jaw line should be at more of an angle and her ear should be a tad lower. His rear hand could use a bit more tension, it's a bit soft atm.
Top

Nicely done and very demonic.
I can imagine them in a thrashmetal band called Solidarity Hates Melanie or something.
...apparenly we can't go with it or something.
Top

Thanks kitty, I'll get to it soon.

But until then... a level 3 orcish assassin. I'll call it Nightblade.

I know there is a level 3 by the name of Nightstalker, used as Dark Assassin in UTBS? But it's not mainline for some reason. Is it outdated graphics or some balance reason?

The weird thing is though, while the L3 is standing in a way, way wider pose, he's actually shorter than the L2. In fact, if he stood up, he'd still be roughly the same height (rather than a couple of pixels taller). That's a minor complaint though.

The (er...what's he wearing) seems to be far baggier than the rest of the line, and there's more contrast too (note the dark parts are a lot darker), but again, these are fairly minor complaints on an awesome sprite.
EDIT: Turns out you're using the second-darkest shade much more than in the Slayer, which is why it seems to have more contrast...I think.
Last edited by Reepurr on February 20th, 2011, 2:26 pm, edited 1 time in total.
"What do you mean, "a dwarvish dragonguard with marksman is overpowered"?"

Looks nice. I think he'd look a little bulkier and more "level-3-ish" if he had a bit more elbow on his right arm.

It doesn't show up in your suggested stats so I'll mention that it looks like he has a Wolverine claw.
BfW 1.12 supported, but active development only for BfW 1.13/1.14: Bad Moon Rising | Trinity | Archaic Era |
| Abandoned: Tales of the Setting Sun
GitHub link for these projects
Top

The base image for the Orcish Nightblade looks great but stats are not correctly balanced.
The Assassin-line is frail but elusive (the ninja pose looks nice.)

Improved Suggested Stats:
moves=7 (Ninjas are fast and elusive,)
hp=45 (As I said, they are frail.)
cost=47 (Random value. Other values should be about 42+)
dagger: 11-2 blade, (backstab?)
throwing knives: 7-3 blade, posion, marksman
kick 12-2 impact
abilities->concealment/skirmisher/nightstalk? (pick one, because I can't decide.)
Creator of "War of Legends" and "Hero of Irdya: Book I."
Former-Maintainer of Start of the War
Maintainer of Forward They Cried
User:Knyghtmare-:-Friend me on Facebook-:-Follow me on Twitter
Top

Reepurr: I examined your comments and indeed, they ring true! I grew the guy a few extra inches gave him a few more brighter spots.

doofus-01: For some reason I wanted him to hold the throwing knives between his fingers, with a fisted hand... Yeah it looks like a claw too much so scrap that then. The shoulder should poke forwards a bit more now anyway.

Lord-Knightmare: Since it's an orc I reckoned that even if it's a frail unit it could at least have similar hp of the human assassin (51). Buuut comparing Rogue and Slayer I see now that Slayer has in fact less hp... Also I felt like not giving it any stealthy abilities as it doesn't befit orcs, and would rather enhance its raw power or survivability. Mostly because when playing campaigns with orcs the slayer kind of looses it's usefulness, or any slayers you have gets killed because they are so fragile. But meh, if anyone would like to use the sprite for anything they would give it stats according to their tastes anyway.

I re-suggest 2 versions, but yeah, it's only suggestions:


I blocked out a attack animation too, inspired by girgistians/(TSI's?) slayer and rhyging5's guy for TSG. 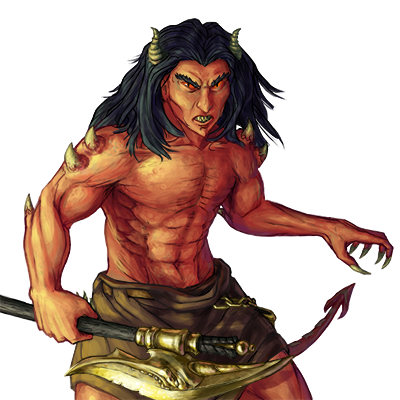 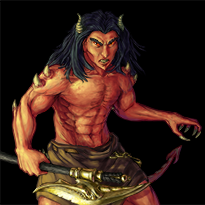 One thing for your assassin, DAs won't attack it because of poison ranged and no undead melee fighter would attack because of the impact attack. Especially if he's on a village. (basically OP against undead) Perhaps reduce the kick to 9-2?
Top

Sleepwalker - you keep blowing me away. Saurians, horsemen, and now you're doing this just in case someone wants it!
Now why can't I be that cool?

Compared to the Slayer, the Nightblade seems rather melee-based to me. Nightblades get a dagger attack either equal to a Level 2 pikeman, or a ridiculously strong assassination attack that would scare away a Rogue, and on top of that they have a powerful poison attack which, damage-wise, is as good as a Level 1. To me, this sort of ridiculous power doesn't befit even an orc when they train in assassination. Here's what I put forward:

Reasons for this:
47HP is consistent with the HP assassins normally gain per level.

7MP means the Level 3 gets a major power-up in at least one way.

The Dagger is weaker than the suggestions because Assassins are not very good with their daggers. Oddly enough, the Dagger is equal in damage output to the throwing knives.

The Throwing knives are quite good because of the range bias (ish) of the assassins. However, it does not have an extra hit because poison as well as marksman is already quite powerful, without an extra 60% chance to poison...

The Kick is quite weak to make sure players don't try and get one of their assassins levelled for dealing with both DAs and Skeletons easily (well, the Level 2s of those, probably, but my case still stands). To me it's just an interesting utility, not one of its main damage attacks.


@ monochromatic: While Skeletons might not dare attack it, and DAs probably wouldn't be suicide-spammed, there are always Ghosts...
"What do you mean, "a dwarvish dragonguard with marksman is overpowered"?"

Or perhaps better yet - skeleton archers, a unit which should kinda have its uses against northerners anyway.
Jazz is not dead, it just smells funny - Frank Zappa
Current projects: Internet meme Era, The Settlers of Wesnoth
Top

Or perhaps better yet - skeleton archers, a unit which should kinda have its uses against northerners anyway.

keep forgetting those guys. Ignore my comment Sleepwalker! And cheers again for the wonderful artwork!
Top

I really like the demon! The only thing I see is a very close similarity in color of the pants and his axe-head, which makes it look muddled in the smaller version.
...please remember that "IT'S" ALWAYS MEANS "IT IS" and "ITS" IS WHAT YOU USE TO INDICATE POSSESSION BY "IT".--scott