Forum rules
Before posting critique in this forum, you must read the following thread:
Post Reply
194 posts

Did he just finish eating some spareribs?

This is awesome, man. I love how you're not afraid to break out of the 'anatomically safe' poses, it really shows your skill. But it kinda looks like he's licking his fingers... is that intentional?

As far as I can see, the anatomy looks great.
"I'm never wrong. One time I thought I was wrong, but I was mistaken."
Top

Speaking as a student who has an anatomy class currently underway, the musculature of his torso is spot-on.
Setanesh Faction! -|- Setanesh Art!
Top

But it kinda looks like he's licking his fingers... is that intentional?

Yup. It will be made more apparent soon.


Speaking as a student who has an anatomy class currently underway, the musculature of his torso is spot-on.
.

Hurray! That's what I was worried about the most.
Win if you can. Lose if you must. But always cheat.
Top

no crits from me, I just wanted to say that I think this guy looks extremely bomb. I love your dynamic/evil looking poses
Top

Thanks for the encouragement thus far. I've had projects to take care of the past couple of weeks so not a whole lot of time to devote to this guy.

Having a lot of fun studying musculature and other such things about the human body. I also decided to do a little research on what we consider threatening and powerful about characters we see in movies or games. I figure I'd share what I've observed in the hopes of starting a dialogue here.

Basically I found that most of today's games get it wrong when it comes to making a threatening looking character. The natural tendency, and I am guilty of this too, is to throw on armor or weapons on either an extremely buff or skinny guy and call it a day. To a degree, this does work. Certainly in history you would want armor and a weapon if you were going to walk out on to a battlefield. But later on with the invention of the rapier, armor became more of a liability. The narrow blade would slide into weak points of the armor and the encumbered knight wouldn't be able to do a whole lot against the quick strike.

So while armor has it's place in the equation, it ends up being somewhat superficial to the purpose we as designers set out to achieve. Good looking armor is certainly useful, but I found a problem with it while trying to incorporate it into this design. Simply put, it covers up too much of the form and makes the character actually look a little less threatening to a degree. Perhaps it's just me being jaded with years and years of observing and drawing characters like that, but I'm finding the appeal of the heavily armed warrior to be less and less. Even looking back in depictions of Mycenaean and Roman art, the victors of the battle depicted are seldom wearing armor. Simply put, the warriors showing skin just come off as more skilled and threatening. A recent example of this is actually the movie 300. Yes, spartans did actually wear armor back in those days as only an idiot would have fought without it. But the movie is basically someone telling a story, and that story includes sparsely armored (and barely covered) men walking fearlessly onto a battlefield full of armored soldiers.

With this in mind, I took away the hood and will look for some other interesting thing to do with his head. Basically, covering up that much skin just seemed to detract from how threatening he looked. He began to look more like a sharp object instead of a lethal person.

Now, however, came the harder part. I want to make him look eerie. Glowing eyes one way I suppose, and I endorse it when it suits. In the story I'd tell about this guy, a slightly luminescent violet iris part of how he became what he is. Emphasizing it would be ridiculous however, as then he'd just be the pale guy with glowy eyes. No, there has to be more to him. So I started looking at diseased and battered people because characteristics of those individuals are alarming. Our eyes instantly jump to those signs and know something bad happened. Pale skin, veins showing, darker circles under the eyes, bruises. All of these set off tiny alarms in our heads and give is an inherent sense of danger about a person on some level or another. The trick, I'm finding, is not to go overboard with it.

So all in all, I'm having an absolute blast doing this. I think the research and practice will end up greatly improving on future designs after this guy. 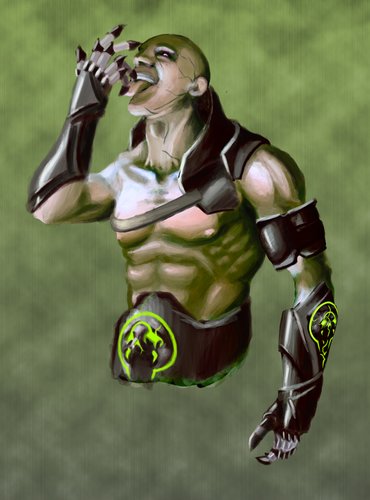 The groove between the neck and collarbone is far too dark and deep.

I'll just repeat what I said earlier about the left hand too; it's smaller than the right, even with foreshortening, and the fingers are in an awkward position; they almost look broken.
Setanesh Faction! -|- Setanesh Art!
Top

These are really good. You should put them in the user art thread/topic.

Issyl wrote:The groove between the neck and collarbone is far too dark and deep.

Yeah, its kinda freaky actually, but doesn't really seem to go.
Check out the FOSS game Sumwars
Wish I had more time for composing music...
Top

Mostly anatomical fixes, touch ups, and perspective correction. I did try to enlarge the hand a bit and mess with the positioning, but that's a pretty neutral finger pose.

Next up is finish off the final half. A little later I'm going to attempt to sculpt this guy using super sculpey. God help me on that one. 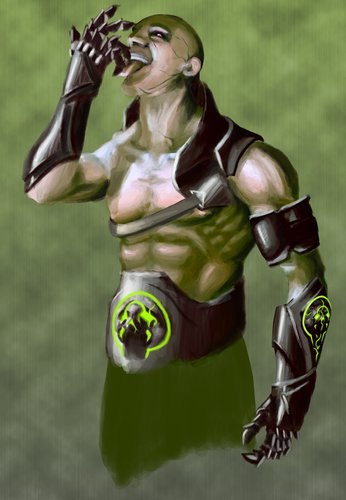 I'm a bit curious how long does it usually take you to get through one of these pieces?
Top

cretin wrote:I'm a bit curious how long does it usually take you to get through one of these pieces?

Depends really. I'm not insanely quick at drawing human bodies just yet, so a lot of my time goes in to drawing and then checking, then re-checking that. Sometimes, like in this current one, I still don't get it right and I end up making changes again anyhow. Otherwise it's a lot of drawing armor and whatnot and seeing what I like. Checking lighting. If I luck out and get a design or two I like quickly then these take right around 10 hours of work (not all done in one day normally) while if I don't luck into a good design, much much longer.

With this particular one however, I'm doing a lot of research on what I want to incorporate and testing a lot of things before I decide it's good enough for the time being. That, on top of three studio courses and art history at my college means it's pretty slow going.
Win if you can. Lose if you must. But always cheat.
Top

Throwing an update up.

Had a bit of a setback with my laptop dying (never buy HP) so I had to take some time to recover files and whatnot. 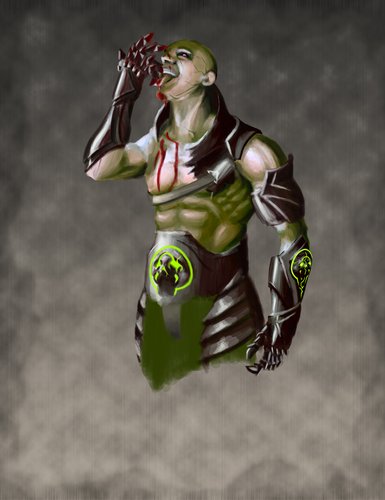 That's why he's licking his fingers. And I notice the collar's no longer a rigidly defined piece... Nice. Makes it look a bit more ragged and incomplete, as if it was pieced from other armors...
UtBS revision spriting.
To The Zeromobile!
Top

I apologize for not noting this earlier, but his right forearm is crooked. Typically the musculature and bone of the right forearm would mean the dorsal side (the side facing OUT in this piece), would be relatively straight, and the ventral side would have more of a muscular bulge.

It's not a glaring error however, so if it's inconvenient or otherwise would have a negative effect on the piece now, don't bother fixing a little mistake to make a larger one.
Setanesh Faction! -|- Setanesh Art!
Top

Issyl wrote:I apologize for not noting this earlier, but his right forearm is crooked. Typically the musculature and bone of the right forearm would mean the dorsal side (the side facing OUT in this piece), would be relatively straight, and the ventral side would have more of a muscular bulge.

It's not a glaring error however, so if it's inconvenient or otherwise would have a negative effect on the piece now, don't bother fixing a little mistake to make a larger one.

I'm... not entirely positive of this, but either I'm not understanding you or you have that a bit reversed. Looking in the mirror and making the same pose places the muscle on the side I have it. The side of the arm nearest to us remains pretty straight however.

Again, I just may not be understanding what you mean.
Win if you can. Lose if you must. But always cheat.
Top
Post Reply
194 posts