Very nice but I suggest you make the end of the hammer larger. It seems small compared to the handle

but very nicely done
Creator of Ageless Era
Check out Frogatto & Friends, it's made by the same people who created The Battle for Wesnoth!
Top

mnewton1 wrote:I suggest you make the end of the hammer larger. It seems small compared to the handle

Strongly disagreed, it would weigh around 10kg as it is, and even that's somewhat inpractical in combat - physics can be bent in fantasy, but completely ignoring them results in... well, bad results.
For the dark gods!
Top

I haven't paid a compliment to kitty in too long---excellent work, and once again amazing costume design, especially given the lack of details of this sprite in particular!
...please remember that "IT'S" ALWAYS MEANS "IT IS" and "ITS" IS WHAT YOU USE TO INDICATE POSSESSION BY "IT".--scott

I used the one from here (both versions) and commited them.

I hope that you can finish Althurin and provide the 205x205 portrait soon. I need to release a new version as soon as possible, and I want to have all your current portraits in it, at any working state. Anything is better than no portrait for Althur[in].

Should I praise your work again?

soo many nice replies again! thank you!
here is the finished althurin transparent and on black.


girgistan - thanks for the catch with the finger, i lightened it up a tad.
spaceinvader - thank you for the irdya explanation! strange how much backstory still is missing!
mnewton1 - i did not change the handle, my reasoning behind that is exactly what girgistan said.
shadow master - i hope that is soon enough... King Asthorgar will be next but i think that will take till next year. did you already say anything concerning if mal keshar should get a new portrait matching the transparent background style or if you want to keep the old one for consistency's sake? 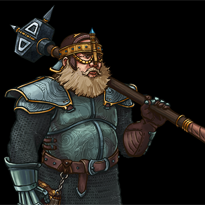 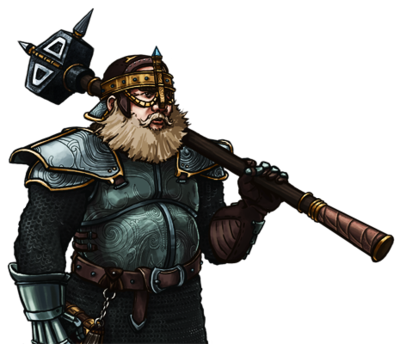 I love the detail on the costume of this dwarf. It's... splendid. It really demonstrates how professional your (and the dwarves') craft is.

Mal Keshar definitively needs a new portrait here. It's been eons since his appearance in DiD, and the artist who did the originals seems to have been unreachable for months. :/ This time he should be probably more deteriorated, though keeping human characteristics per scenario 4's intro in IftU:

Me and Eric S. Raymond wrote:Even after thousands of years dead, the necromancer still had scraps of flesh on his body and traces of hair on his head. We elves have fought necromancers before, but this one... this one was different.

According to Anlindë, he was a tormented soul. A man who had fought for a noble cause in a way that tainted and twisted and destroyed him. I feel uneasy with undead by our side. We elves, even in our most ancient histories, never fought on the same side as necromancers. Even our own kind who learned the dark arts we executed, as the humans do. Now, after traveling with this... man, I wonder if our actions in the past were just...

Regardless, it seems that this one is not completely evil. He could be a great help for our cause if he is being honest with us. My people sometimes say that closest friends may turn into your worst enemies. I have no great friends, except Anlindë, so I hope that is not true.

Note:
I did make up the name "Irdya" as a name for the planet in which the Kingdom of Wesnoth is located, for an early revision of scenario 9, "The Library", which contains messages with arcane information that nobody should know.

However, for a project of ESR, Aethaeryn and me, I asked ESR if the name could be used. He discovered that it meant "dirt" in other language. Funny coincidence.

Commited Althurin's portraits in revision 3015 (1.10.1+svn past release level). Thank you once again for your marvelous work!
Author of the unofficial UtBS sequels Invasion from the Unknown and After the Storm (now available for Wesnoth 1.14).
Top

Say Kitty, a question for you:

How do you decide what portraits to make? Do you do portraits of units you like, or characters that strike your fancy? Or maybe those that are different enough to present you with a new challenge? Or do you simply do the portraits people ask you to do?
Light travels much faster than sound, that's why some people seem bright until you hear them speak.

trashman, uhm - i do mostly mainline work, that is those generic unit portraits. for example my elves and wizards. i chose them just after personal liking, i guess. and sometimes i do portraits for a campaign (like wesmere or IftU) if it has a realistic chance of getting mainlined and the maintainer asks nicely.
Top 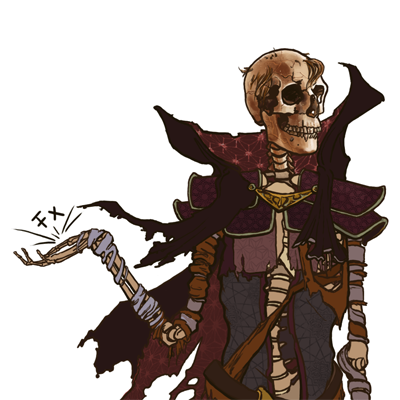 Nice work on the decayed skull.

Maybe you have a plan for it, but for now the collar looks distractingly big. And a little bit airborne - it's about to end up in his face. Sorry for the subjective comment, but the collar really grabs my eye and I doubt that is how it was intended.
Top

I'm a bit bothered by his right arm...

the pose is not very natural for a human, unless carying something quite heavy,

you're probably better than me at anatomy, but it looks weird to me...
Fight key loggers: write some perl using vim
Top

Cool outfitting. Unless you're going for a "painful" look with the wrist (I mean it's not limited by tendons and muscles anymore), I'd suggest tilting it to an almost horizontal pose - maybe even have it point slightly up.
For the dark gods!
Top

Very well done, as always - but how is that lock of hair on his forehead attached?


I'm also not sure if it really fits the character of Mal Keshar, but I've only played DiD, not IftU, so maybe it does fit his character in the latter campaign (which is the one you need to care about, obviously).
For I am Turin Turambar - Master of Doom, by doom mastered. On permanent Wesbreak. Will not respond to private messages. Sorry!
And I hate stupid people.
The World of Orbivm
Top

turin wrote:Very well done, as always - but how is that lock of hair on his forehead attached?