since no serious issues occured - here is erathan in 205 on black and 400 on transparent background. 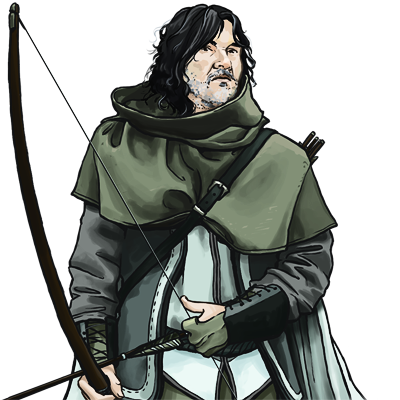 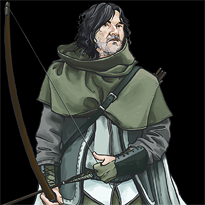 kitty wrote: ...
shadow: thanks! and yeah, those loose lines would be a real pain to colour, i guess! do you do that at all?

Oh I did try. Laying out the flats was a pain but doable in the end I glorius failed with the shading and the results I wanted to achive. Nobody is perfect.

And yeah very nice coloring.
This girl, this boy, They were part of the land. What happens to the places we used to tend?
She's a hard one to trust, And he's a roving ghost. Will you come back, will you come back, Or leave me alone?

kitty wrote:urs/sangel - i'm aware of shadow's sketches. but i don't want to use them as a base. they are cool in their own way, but they "live" through their loosesness and open lines. apart from a lot of atmosphere and waving cloth they don't show a lot of costume design/details etc. - and those details would be what i could incorporate in my interpretation of this aragwaithi.
thus i'm just waiting for shadow's comments right now...

This is interesting. My mother actually draws like wayfarer, and the fuzziness of the drawings really add a special trait to them. I'm not sure how to describe it with words.

I'll commit as soon as I finish recovering from a bad HDD crash.

Nice! I must say I like it very, very much.

if only the sprites would be finished up sometime soon (hint, hint)
Orbivm
The Droch Fae
Top

Commited, thanks.
Author of the unofficial UtBS sequels Invasion from the Unknown and After the Storm.
Top

thanks to all! you're too nice!

igor will be the next, i'm not sure when i'll have time...
ignacio - i can leave the wolf out, can i? and do you have a specific age in mind - is he young or old?
Top

Considering that he's rather dumb and gets easily afraid of stuff, he's probably young.

But yeah, leaving the wolf out is okay, but take the weapons portrayal issue in mind. That is, this unit does not have its own weapon unless the player decides to advance it to a Goblin Pillager; in such case, he gets a net and a torch.
Author of the unofficial UtBS sequels Invasion from the Unknown and After the Storm.
Top

and finally a start for igor, our young goblin... 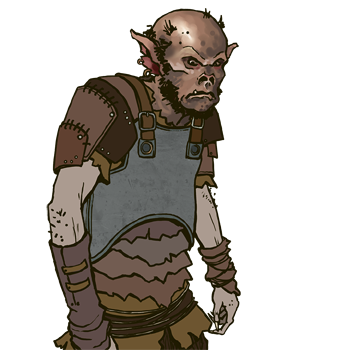 I like your take on the goblin =D He looks unhealthy and surly, which is perfect =)

But his shoulders bother me - it might be the armour, but the look very broad and square. I picture the goblins very slope-shouldered and generally poorly muscled. He also seems to be missing eyebrows. maybe he burned them off with his pillager torch =D
http://thespaceinvader.co.uk | http://thespaceinvader.deviantart.com
Back to work. Current projects: Catching up on commits. Picking Meridia back up. Sprite animations, many and varied.
Top

Yay, the work goes on. He's got a good and proper raggish look, and the expression's overall pretty well done. Considering the head's slight tilt, however, his left eye seems to be positioned too high on the face.
Is there a reason for the arms being so short compared to the torso? Or am I just misinterpreting this?
For the dark gods!
Top

I think he has a tad too much torso, goblins are pretty stumpy. That is that sprites sure give that impression.

thanks for the comments - i moved the eyes slightly, shortened his torso a tad and narrowed his shoulders a bit according to them. 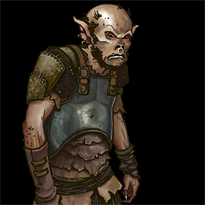 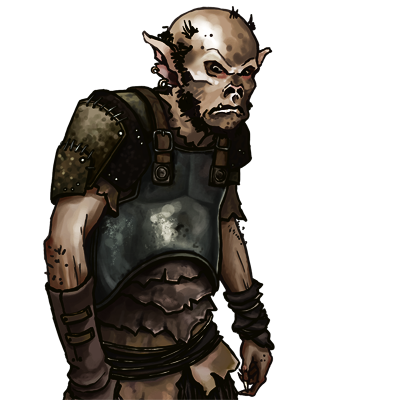 I'd kill to have even 1/10th of your talent (I especially suck at shading. Never do seem to get it right).

amazing work as always!
Light travels much faster than sound, that's why some people seem bright until you hear them speak.

I think the short arms/long torso is because he is skinny and his clothes don't fit well? Imagine him with a baseball cap and earphones, and some big orc yelling at him to pull his pants up. Then the proportions seem OK.

Nice job, it's interesting to see what you do with non-humans. (Elves are basically humans, I think.)
Top
Post Reply
169 posts