Forum rules
Before posting critique in this forum, you must read the following thread:
Post Reply
461 posts

A 'progress report', half to ask for tips, half to see what you guys think of what I've gotten so far.
The first image is the whole thing I've worked out. And yes, not taking a step is intentional-these guys are the base-level 'tanks' of the group-I feel like they shouldn't really change positon or do like a backflip to dodge away from attacks, but more 'stand your ground' type things.

The second is what I've actually gotten done as far as the sprites go: the 'base' stance of Gatekeepers, and on the left is the first frame of a dodge animation (Bending backwards to dodge the incoming blow from current stance.)

Any thoughts on either one?

EDIT: So while I'm still cranking away on it, albeit slowly, I feel the need to say that if any other artists wish to work on this faction-feel free to go ahead-I've gotten in over my head here! 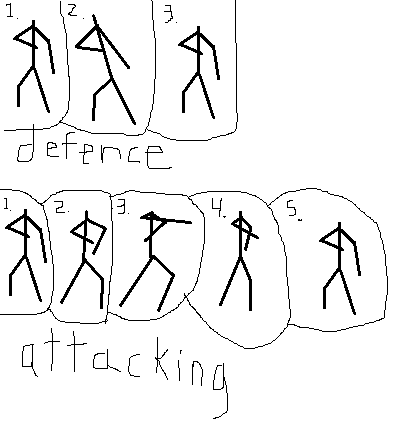 I am very bad at art, but I thought the Falcon line of the Therians needed a push.

I like a lot the level 1 graphics, but when in levels 2 and 3, she is totally transformed. This graphics aren't very consistent with the other units style (even with Wesnoth style).

So with the help of GIMP and the falcons from Khalifate factions (I don't know the proper way of giving credits), I have frankensteined new graphics.

The idea behind the graphics is extracted from the faction background. More experienced shifters are able to retain their animal forms longer, and those powerful enough retain their forms during all battle.

a) Making her hybrid when standing, and totally falcon when flying and attacking.

b) Make her wear more birdlike adornments. Those adornments as supposed to act as foci helping her to shapeshift.

I tryied option a, but only could get weird things. So, I put her fake wings and beak. I wanted to use a feathered cloak instead of wings, but I couldn't do that either.

I made her transform in a true falcon when moving, explaining her augmented speed from level 1.

The graphic is the level 1 hybrid form, but with the beak. I though that would be a fair combat form.

Other option I considered is to let her adopt the form of gyrfalcon (see bellow) during attack.

I simply took the Falcon Lord from Khalifate and (wrongly) put her a collar with teamcolor. All frames are the same (standing, moving or attacking).

I used the falcon from Khalifate, which makes her smaller than the Gyrfalcon.

Advantage: When leveling up is easier to guess the difference beetween the units: the Gyrfalcon is bigger, has more hp and deals more damage, and the Peregrine falcon is smaller and weaker, but moves faster.

Disadvantage: My brother has made me see that a level 3 unit should be generally bigger than in its previous levels, and the unit should seem powerful. It is true that viewing it in the batterfield you would not guess that it is a level 3 unit.

Maybe both birds should be big, but the gyrfalcon more robust and the peregrin falcon more aerodinamic. But those things are so beyond my skills.

I made the peregrine falcon grow to attack because it seemed appropiate with her shapeshifting ability.

The thing is that in the game seems a little weird.

The attached unit graphics are incorrect because team color is not working well. I have to inform myself how it works (I thought it simply had to be magenta, but the funny thing is that all magenta zones have been copypasted).

The units affected are the Falcon standing (her dress has the correct color, but with magenta stains in it (see picture), the gyrfalcon and the peregirine falcon (small and big).

NOTE: I have the xcf (gimp files) if someone need them.
NOTE2: I could also supply the unit files.
Top

The forum did not allow me to attach more than 5 files. The missing ones were:


The problem with team colors: 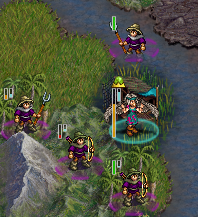 About your team colour problem - it's not about the hue, there is a list of colours that are considered magenta. The easiest way to make your magenta behave like team colour is to copy these exact magenta colours from existing sprites.
I named your units.
Top

Dugi wrote:The easiest way to make your magenta behave like team colour is to copy these exact magenta colours from existing sprites.

That makes sense with the falcon. I copypasted the hair band, but used a tool to rotate it. The GIMP must has changed the exact color.

The other one is harder to explain. Maybe there were bad erased pixels (almost transparent) when I copypasted the wings or some other pieces.

I'll try to fix this picking the colors from original graphics.Thanks for the hint.
Top

Wesnoth has a very specific magenta palette. The (only) colors that work are the ones on the attached image (also located in images/tools).

The sprites actually don't look that bad. Only thing I don't really like is the beak. I'd prefer if they have a human face when not moving. Could you maybe provide a comparison with the old ones; put them all in one image.

Creator of the Era of Chaos and maintainer of The Aragwaithi and the Era of Myths.
Wesnoth-UMC-dev, a nice place for add-on creators.
Top

bumbadadabum wrote:Only thing I don't really like is the beak. I'd prefer if they have a human face when not moving. Could you maybe provide a comparison with the old ones; put them all in one image.

I've been correcting the team colors, and cleaning some almost transparent pixels.

I think all of those are now correct.

The rest of them were correct the first time.

I could also provide the modified unit files.

EDIT: I fixed the dresses in falcon.png and falcon-withoutbeak.png. I thought it would be less noisy to edit the post instead of creating a new one.

Sooooo long story short- Windsong is hard, so I'm shelving that to work on the Therian Monks!
The idea here is a straight jab with the open palm-this animation could work for both the melee and ranged attacks, though I might make alternate versions, a standing one for the ranged attack, and more of a lunge or step forward for the melee attack.
If anything's iffy looking, let me know!

it sort of is, at least in comparison with this one (seems to be starting with this post):
http://forums.wesnoth.org/viewtopic.php ... 65#p391025

if zero's monk does not fit for some reason, i would suggest to replace the head, at least, and reduce the outline dominance on the upper body if you can (or ask someone for help).
a stronger coloring on the skirt probably also wouldn't hurt.

if the monk by zero is gpl, that is.
campaign ruthless in your nearest 1.11 add-on server
some wesnoth-related drawings
Top

it sort of is, at least in comparison with this one (seems to be starting with this post):
http://forums.wesnoth.org/viewtopic.php ... 65#p391025

if zero's monk does not fit for some reason, i would suggest to replace the head, at least, and reduce the outline dominance on the upper body if you can (or ask someone for help).
a stronger coloring on the skirt probably also wouldn't hurt.

if the monk by zero is gpl, that is.

O.o
Ummm...I'm trying to make animations for this unit. If the current sprites aren't satisfactory...Well.
I think how much trouble I've been having with them would say plenty about my ability to actually create sprites in general.
Anyhow, as far as the monk goes-here's my current level of progress.
The top row is the ranged attack animation sprites, the bottom row is meant to be defending. 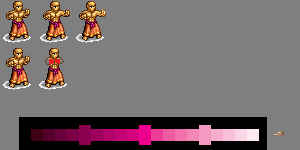 My old art shouldn't exactly be held up as an ideal design, and it certainly isn't perfect. Try to strive for a dynamic pose that shows off the human anatomy more- both of the cited examples above are really very boring as far as posture goes. 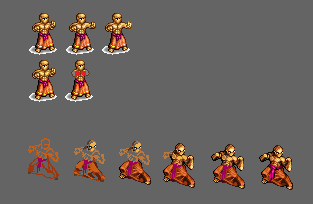 @Zaealix
More specifically my opinions are:
1. The shape of the head gets identified as not characteristic to humans, especially the top of the head should not be so flat, and the head above the eyes seems to be back-lit, because the highlight is a hollow shape along the outline. Highlights on round things are more convex (unless back-lit). So, in my opinion, the head doesn't really work, and from the time when I played the game (must have been at least about a year ago) I remember seeing the same head being reused in many sprites and frankensteins and each time it attracted attention.
2. There are outlines in the middle of the sprite. Probably to make the meaning of the sprite readable, but compared to just shading as you can see in the above post it is inferior to shading.

Now, animating takes some effort and time, it makes sense to ask if there is anything iffy first.
So the first thing was obviously pointing to the existing sprite that didn't have those problems.

@Zerovirus:
The new sprite looks cleaner, etc, but strangely, I still like the old sprite better for those reasons (so that you can tell if those reasons are invalid for you):
1. As far as I remember, there have been various opinions about base sprites having an overly dynamic pose. The old sprite seems to have a lot of character packed into a more solid standing pose, probably because of the tilt of the head and body.
2. To me the old sprite head looks more Asian rather than generic, and considerably resembles Shi Yang Ming (too good-looking for celibacy, as he himself said at an interview). Also, it looks slightly juvenile, which can be good for Wesnoth sprite proportions, and the color of the shaved part of the head looks more identifiable as a shaved head.
campaign ruthless in your nearest 1.11 add-on server
some wesnoth-related drawings
Top

I like the dynamic pose, his arm was just too long

Is art development for Era of Myths still going on? Is the requirements post at the thread start still valid?

The vampires feature a succubus sprite that is used as a female fledgeling with all the stats and descriptions of a fledgeling. I just happen to play Count Kromire and while the sprite looks good (vampires are truly dashing and the succubus has great shoes) it somehow looks so much more similar to a blood apprentice than a melee specialist (sprite has no visible weapon), the female noble at L2 sports a huge sword and the high levels have unique sprites although with weapons. The archer line has minimal differences between males and females, but in the L1 fighters it is huge so the female fighters are quite hard to identify as such. 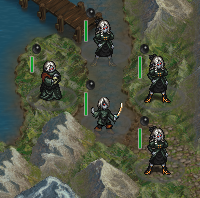 5 units. 4 fledgelings, 1 apprentice. The unit that stands out is the male fledgeling though.
fledgelings.png (85.96 KiB) Viewed 5108 times

I am a Saurian Skirmisher: I'm a real pest, especially at night.
Top
Post Reply
461 posts