Forum rules
Before posting critique in this forum, you must read the following thread:
Post Reply
25 posts

Let me just say that I never did finish that sprite, unfortunately.

However, I'm still a huge fan of saurians and the state of the saurian sprites did not seem to change all that much since my last post. This time I've tried something simpler and came up with this unit:

It's basically an alternative upgrade of the skirmisher with a similar equipment to the ambusher, but without a shield. I've finished all of the animations except for idle - they're certainly not perfect, but feel free to use them for campaigns and whatnot. I've also included an example config file of a saurian spearthrower unit using these sprites.

I might eventually do a second upgrade, hopefully in less than 5 years, so stay tuned.

I've also played around with some sprites made a while back by Neoriceisgood:

If I'm remembering correctly, they were based on a special unit tree from an old saurian campaign (which was release around the time I've found the game). So far I've changed only a couple of things:
- Skin color, from yellow to green. I believe they were yellow originally, and it might make sense within a campaign, but I'm aiming for a little bit more versatile set of sprites that you can immediately associate with the race without any context.
- Posture. They are slightly more hunched.
- Equipment palette. The weapons should not be a little more similar to other saurian equipment, and magentas should now be correctly picked up by the game engine.
I'm not entirely happy with their look yet - I'll probably try to tweak the weapons and make the heads a bit more, well, saurian. The animations are a huge undertaking, but I'll try to make some basic SE bob, defend and attack animations at the very least.

As for the stats, I think melee-only units with primary blade attack might make sense. They'd gain leadership and a secondary pierce attack after the first upgrade. Not sure about the names yet - something along the lines of Enforcer > Leader > Chieftain. Let me know what you think.
Top

It's basically an alternative upgrade of the skirmisher with a similar equipment to the ambusher, but without a shield. I've finished all of the animations except for idle - they're certainly not perfect, but feel free to use them for campaigns and whatnot. I've also included an example config file of a saurian spearthrower unit using these sprites.

Woah, this looks nice. I shall use it.

The new "Saurian Leader -> Saurian Chief -> Saurian Lord" (my suggestion) base images do look really nice. Hopefully, you can make even better than their current appearance. I will probably include them in my campaign as well.

Finally, welcome back to Wesnoth and the Forums.
Creator of "War of Legends" and "Hero of Irdya: Book I."
Former-Maintainer of Start of the War
Maintainer of Forward They Cried
User:Knyghtmare-:-Friend me on Facebook-:-Follow me on Twitter
Top

These would certainly fit in a campaign where you start with a single unique leader, but it doesn't quite work for regular unit that could be recruited at Lv1. And I'm not quite sure if there are lords in saurian society in the first place.

Chiefs (chieftains?) are mentioned on the wiki as tribe leaders, so I think it's a decent name for the Lv3. I'm not sure about "enforcer" yet, maybe a simple "warrior" is good enough.
Top

These would certainly fit in a campaign where you start with a single unique leader, but it doesn't quite work for regular unit that could be recruited at Lv1. And I'm not quite sure if there are lords in saurian society in the first place.

Chiefs (chieftains?) are mentioned on the wiki as tribe leaders, so I think it's a decent name for the Lv3. I'm not sure about "enforcer" yet, maybe a simple "warrior" is good enough.

I guess it would be slightly similar to Orcish Grunts, but most factions do follow the same thing more or less.
Creator of "War of Legends" and "Hero of Irdya: Book I."
Former-Maintainer of Start of the War
Maintainer of Forward They Cried
User:Knyghtmare-:-Friend me on Facebook-:-Follow me on Twitter
Top

Possibly, but "warrior" doesn't strike me as a unit with leadership. So probably something along the lines of Warrior > ? > Chieftain. I'll think about it.

Anyway, here's a base image for the spearthrower upgrade:

Unfortunately, flanker (Lv3) has a bit bigger sprite, which makes it more difficult to replace the equipment - it doesn't quite fit on the skirmisher template. I'll try to do a couple of basic animations and see how it goes.
Top

Awesome work! Glad to see these sprites revived! The Saurian with the club is really great and I would love to see it finished, you've already done so much it would be a waste not to. Not everyday that you see an add-on with a fully animated sprite!
“Truly I was born to be an example of misfortune, and a target at which the arrows of adversary are aimed.” -Donquixote

developer of era of empires (In progress)
Top

Except I only did the very basic animations, and the basic sprite isn't very well designed in the first place. Attacks are way harder to animate (and get right), especially since this particular weapon placement does not match any of the existing sprites.

Animations aside, my problem with a lot of the current saurian sprites out there is that most of them feel like reskins or variations of the existing units, and would only really work as alternative upgrades of the skirmisher or augur. My spearthrower tree is very much guilty of this, but it was made with a specific purpose of being a skirmisher upgrade. I don't like the fact that many saurian sprites could be summed up as "skirmisher/ambusher/flanker grabbing a different weapon". As a counterexample, Era of Magic has some nice saurians that do not have this problem.

Anyway, the reason for my rant is that I'd rather focus on sprites that are distinct enough not to be copies of the official saurians, but still look like the same race, if that makes sense. That's why I planned on tackling the leaders tree first.
Top

Welcome back talentless, I always wonder where you went but I am glad you are back. About your old sprite I found these Saurian sprites two of them clearly being based off your enforcer but renamed to harvester.
Tho I don't remember who made this advancement line but I can quickly go check again in the workshop. ( edit: found it in MerlinCross' thread)

You could do something with these since they were based off your enforcer but these were never used anywhere. But I am planning to use a lot of Saurian units for a Saurian & Naga alliance campaign I have in the works. 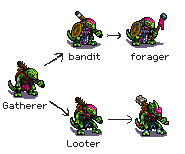 Ok so redid the placement altho the names for the advancement doesn't make sense how one upgrades from bandit to a forager. The last one with the hammer/maul had no name.
Saurian-line fixed.png (8.91 KiB) Viewed 333 times

Interesting, I haven't seen these. I quite like the looter tree, although the final upgrade looks more like a 2nd level saurian.

Is your campaign available as an add-on? I had a similar idea, especially since I'm a huge fan of 2-player campaigns. I think it could be interesting if maps incorporated 2 (or more) types of enemies at once, where each player could excel at a specific map sector - e.g. nagas fighting off mermen in swampy waters, while saurians are busy with elves in a swampy forest.
Top

I originally wanted to do something like the unofficial prophet sprite, but animated and more in line with the existing flanker upgrade. I quite liked all of the applied changes, especially the weapon modification, fancy hat thingy and the glass ball. However, I eventually decided against the glass ball, since it would require complete redesign of most of the animations, and weapon would simply take too much time to update on all of the frames. (Might eventually get around to do it, but I'd rather publish something useable sooner.) I settled with a recolor that follows the palette of flanker, which is basically the only official 3rd level saurian unit.

While I don't believe it fits the mainline graphical standards of unit advancement (i.e. it's a bit too samey, and it's not visually bigger), I could see it being useful for saurian campaigns where you'd want the players to gather a bit stronger units. In this case, prophet would give the oracle branch a bit more utility over the soothsayer - lower heals, but much more damage potential in the long run. I could do a similar recolor of soothsayer, but I don't believe it particularly needs an upgrade with its heals.

Below you can find an archive with all of the animation frames, as well as an example configuration file where prophet is a clear improvement over oracle in terms of damage and HP, without any additional special abilities.

I've also updated a few frames of the spearthrower, since I've noticed that the spear has incorrect lighting on some of them (due to horizontal flip). 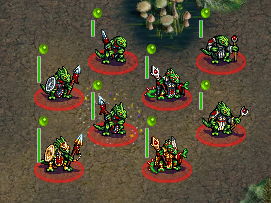 EDIT: I've just realised that a similar unit is available in the Across the Ocean campaign, including the crystal ball. They didn't do all of the animations, and the ball does disappear in some of them, so I decided against adding it to the prophet sprite. I might still try to play around with unit height or head spikes/scales to make it a bit more distinctive and Lv3-worthy.
Top
Post Reply
25 posts