Greetings everybody,
I am new to making units and coding for wesnoth, and I thought it'd be good to get some feedback on my art, so i'll be posting it all here.
My first project with drawing art has been a arctic faction, mostly consisting of penguins. But also with Polar bears, Seals, Walrus's and Puffins.
This is a standalone faction for a campaign, which is just a bit of zany nonsense.

Here is the first Sprite i made, the Puffin, He was based off of a Ruffian, he'll probably be updated to match the look of the penguins more later.

The second was this here Penguin soldier, his sprite, and gameplay are near equivalents to that of the Spearman. lvl 1

The penguin faction has a level 1 leader and two level 0 penguins, a ranged and melee penguin. the lvl 1 leader is the Penguin Bannerbearer, based off of the Penguin soldier.

And then the Penguin Peasant, lvl 0

I have had troubles shading with the team color and the peasant is a perfect example, i just can't get it to appear nice, especially when the color is changed to red.

The lvl0 penguin crossbowman on the otherhand i'm quite proud of

The penguins also have a steadfast unit, the Galvanized Penguin, this unit came out very well.

Now i have made 2 Lvl 2 units, one i am very happy with, the other not so much.
I'll post them in a seperate post.

Please critique to your hearts content, and if anyone knows a good way to fix my team color problem, i'd love to hear it!

Cheers
“Truly I was born to be an example of misfortune, and a target at which the arrows of adversary are aimed.” -Donquixote
Top

Here are some Frankenteins i made just for the heck of it, they turned out quite well.

Here is the first one, just a rogue with Owaecs head from eastern invasion, and a simple staff, i have simply dubbed him: "The Wanderer"

Than i made this fellow, who is a herbalist with a fire mages head, and a nice little sword.

Now for my favorite, "The Man With No Name." his body is a modified Dunefolk Spearmaster, and his head is from one of the attack animations of the peasant, which looks quite intimidating, don't know what his cane thing is, i think of it as the sheath of a sword, but who knows?

Here are two lvl 2 units for my penguin faction,

This one is my favorite sprite that i have made, The penguin duke, he is the leadership unit of the penguins, as of now he just has a sword attack, but i might add a banner attack with first strike, if i'm up to animating it that is.

This fellow i really wanted to turn out cool, but he just didn't end well, something about him is just bad, any suggestions on how to fix him are welcome,
the Penguin Knight.

First here is another Penguin, the Penguin priest, he has no melee attack like a Dark Adept, but he also has a slow attack called freeze, they use ice magic.

I made this Dune Worker For someone for a campaign,

Here is just a simple frankenstein.

And then finally this is my profile picture for the forum, he is just a modified version of a frankenstein i posted last week

Very interesting! Regarding the penguin knight being not cool enough, I would say first the turban is one factor.
Then perhaps the armour needs some more pronounced details. It makes him lok a bit fat now.
And if it is still not enough change the boots maybe into something more powerful, it looks like he is wearing uggs
Top

I totally agree, as it stands he just looks flat, i think he needs more details.
As for his hat, i was trying (and failed) to emulate this style of Medieval Nobility hat. But i may just drop the hat all together when i rework him. 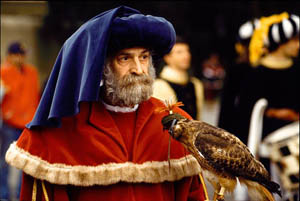 
Thanks for the feedback.
“Truly I was born to be an example of misfortune, and a target at which the arrows of adversary are aimed.” -Donquixote
Top

Art #4 new project and more penguins
I have started making sprites for a new era i'm thinking of making, i'll make a thread on faction development when i have a bit more. but here are the first two made for it, the era of empires. a 19th century fantasy era.

Just finished this land, a Dwarven trooper, inspired by prussian unifroms, the dwarves are going to be sort of steampunk (because of course) steampunk prussian dwarves!

the level two version of the Galvanized penguin posted awhile ago, the parkerized penguin

And finally a miscellaneous lvl 1 firemage
“Truly I was born to be an example of misfortune, and a target at which the arrows of adversary are aimed.” -Donquixote
Top

Hey there,
I came to take a look at your art and I must say - good work, especially if one takes into account that nobody here has ever done something about penguins!
To be successful in umc, a unit must be either animated or have an extraordinarily appealing idea behind it. Your sprites are in the latter cathegory, and thus I thought about how to implement them. Most of the time in umc wesnoth, it is not art that is created for ideas, but ideas are made to conform with existing art...

So here is my broad sketch:

If you need assistance with WML, I can be of some help ^^
Default L0 Era - Level 1 leaders with level 0 recruits!
Top

thanks, that's pretty great. As for the balancing of the penguins, the intention is to have the faction as a whole be an "Arctic Confederation" of sorts, mostly consisting of penguins, with a Polar bear line of units, and a walrus or sea-lion line, and of course the Puffin scouts aswell.
As for the balance of the penguins, i had envisioned them as quite squishy on land, and they don't move particularly fast on water, but they do have high defense on water.

I was also contemplating having the penguins two base units (Penguin spear and Penguin Crossbow) be lvl0, with the support of the lvl 1 banner penguin, and having the other units work as support for them (Penguin Priest can slow enemies and soften them up, Galvanized Penguin holding positions the lvl0 units can't and soaking up damage.) but i'm not so sure that would be the best idea anymore.
I'm open to any suggestions for balancing really

This faction has mostly been designed around the idea of a campaign, so they will most likely be standalone, if i do release them, it'll only consist of the campaign, and the faction +default. Unless of course i change my mind.

As for WML help, that would be greatly appreciated, this campaign is really my first venture into it, and coding as a whole really. If i ever need it, i'll just send you a message.

Cheers.
“Truly I was born to be an example of misfortune, and a target at which the arrows of adversary are aimed.” -Donquixote
Top

Art #5 Era of Empires work
Here are some new works for my era in progress, the Era of Empires, I made an official post on the faction and era development, which can be found here: https://forums.wesnoth.org/viewtopic.php?f=19&t=53080

So, Here are some new sprites:
Two sprites for the Goblin army, well, two/four

These three are all the same unit, the Goblin Pikeman, However the unit will have a randomized appearance between these three sprites, so just different hats and pike heads.

Next the Goblin rider, I'm quite happy with him, except for one thing, his pistol, it's hard to see and to tell what it is.

Now two human units, first off, one of my favorite sprites I have made, The Zouave.

And then the most recent unit, which I am also very happy with, is the Pyrrhian Hussar

“Truly I was born to be an example of misfortune, and a target at which the arrows of adversary are aimed.” -Donquixote
Top
Post Reply
11 posts • Page 1 of 1