powershot wrote:@Doofus: I don't think it will work, maybe a diffrent eye shape?

More like a cat's eye? Then you could use the mainline "attacks/gaze.png"

Shinobody implies that I take a perverse, 4channish pleasure in posting here, but it's not really true. This makes me think you are not so fragile, and if you are working towards a unified project, a goofy style may be OK. If not, keep working at it - if you are trying to advance yourself at all, realize frankensteining is, well, crap. It's like duct-tape, it's better than nothing, it's even better than spit and mud. But you need to spend some time on things if you want to produce something interesting to others.
BfW 1.12 supported, but active development only for BfW 1.13/1.14: Bad Moon Rising | Trinity | Archaic Era |
| Abandoned: Tales of the Setting Sun
GitHub link for these projects
Top

A little notice; much like another statement about your Vulcans living underground, a bow might not be the best idea in water. If they are, by chance, a race that preffers to attack on land, a crossbow might be a better choice, since it has a faster and stronger firepower (if you can call it that

), and can get farther in the water than a bow can. I know it doesn't sound very elvish, but that would make more sense than a regular bow, I think.
http://www.youtube.com/watch?v=-PLyQx6s6qA
-One of the most inspiring Linkin Park songs ever!
Top

In my slightly less than professional opinion, way too much thought is going into this. I understand (as we all should) that WINR. Yet, Archanix has a valid argument. Bow+Water=???. Doesn't seem too good of an idea now, does it? As for the Vulcan race (and other races included) you need to not only think outside the box, but also be original in the making of your races. Like the Bow underwater theory. You're basing the Vulcans so much off of the Elves that you are forgetting to make the whole thing make sense.
Top

What I'm making is a Water elf not a Vulcan.

It was an example. Elves have always been known for their skill in Archery. Plus, elves are beings of the land, and I think a Water Elf would be some sort of Hybrid if it is to live in the water. Like I said before, a bow in water would not make sense at all. So if you want an elf, your best choice is to have elves that live near the water, but not in it.

You might be better off making a new race all together, instead of making one that has very little simularities of the race it is based off. If you take out the bow and add fins, or gills, or whatnot, you have a completely different being. Either stick with it being on land, or creating a new race would be the best choices.

I do believe there is a topic within the forums that explains when to make a new race instead of using an existing one, but where I found it, I do not remember

.)
http://www.youtube.com/watch?v=-PLyQx6s6qA
-One of the most inspiring Linkin Park songs ever!
Top

Sorry I didn't use the cross bow.

Here is everything except the face:

Some of the parts may look the same since I used the royal guard and Master bowman as pixel references.

This is great for my 4th original sprite. It's almost like mainline.

powershot wrote: This is great for my 4th original sprite. It's almost like mainline.

here is an update, should I lose the smile:

...How to word this nicely... It ain't mainline quality, sorry ti say. It's not even add-on era quality.. So yes.

Well... It'll be added to era of three worlds. 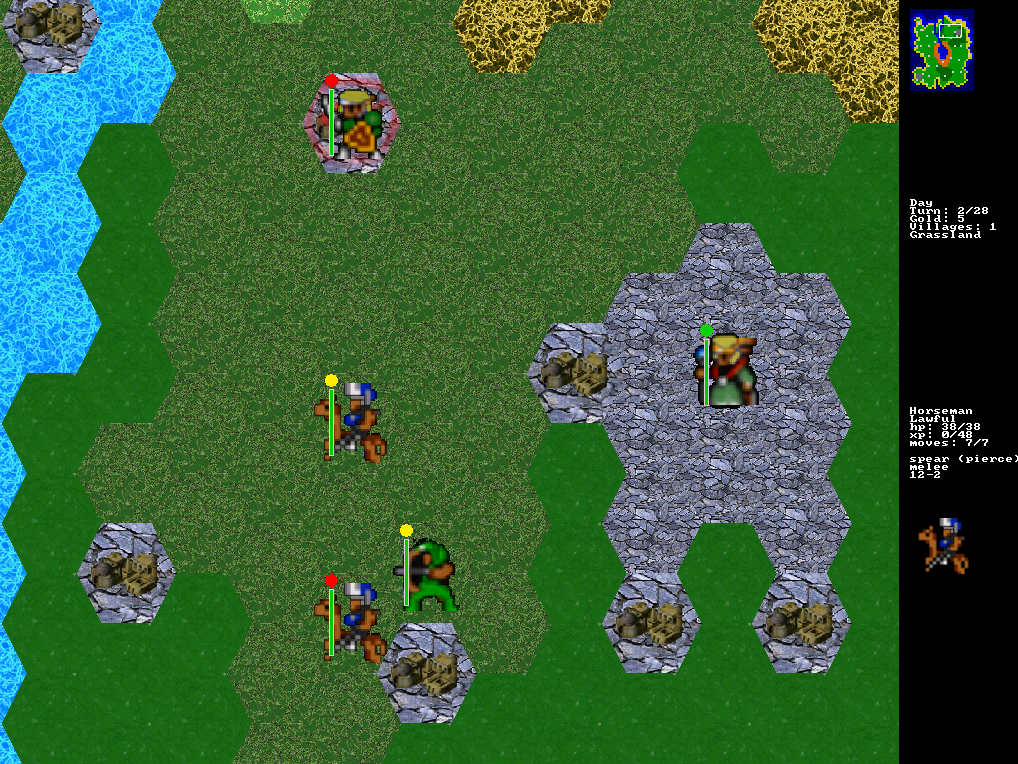 I kinda like it. Stylised, yes, somewhat nascent, but if the other Wesnoth art hadn't gotten so good, this water elf wouldn't look too bad in comparison.

I wonder how it will look facing the wrong way versus other Wesnoth sprites, and it seems a bit big too. But you've got to start somewhere. Original art is always better than Frankensteins.
UMC Story Images web gallery

Great_Mage_Atari wrote:...How to word this nicely... It ain't mainline quality, sorry ti say. It's not even add-on era quality.. So yes.

mainline quality, not by a long shot. But dont be too hard on him, its not terrible theres definetly worse add on stuff.

I agree about worse add-on stuff

Is the man in the pic riding a camel?
Top

@ powershot For some reason, I think if you added a neck, it might look better. :L
Use a shade or so darker to highlight the ending of the face and blend it downwards to create a shadow giving more depth. ( a little bit of the blending ) Then continue with the face colour/pattern.

Btw is it wearing a body suit as the hands are coloured in the clothing colour of grey.
Last edited by cookie on September 7th, 2011, 3:34 pm, edited 1 time in total.
Bye says the cookie.
Top
Post Reply
557 posts