You can get several years of versions from https://github.com/ProditorMagnus/Agele ... 1/releases.
Justice is what happens when someone with a sword kills someone without a sword.

I combined the v4.15 values with the balance unrelated changes. An exact list of all the differences can be seen here.
I'm having no objections to any changes, in fact I'm about to stop to work on EoM, because I'm not having the time anymore.
However, I want to link to this discussion, it potentially points out some problems with the devlings, personally I worried about the point that it's harder for your enemy to get xp.
I plan to make a (last) EoM release soon, should I include there both flavors of devlings?
Back in August.
Top

Needed a total of 2 reloads to find it in later turns (turns +30, I can't remember)


Expectations of Tiers judging the results on this game:
--- Devlings Tier: A-
They literally carried the other 2 sides, but they had inconsistencies at surviving in later waves which usually is not a problem when I'm playing with other persons using stronger factions. Sad that no Abuser could live till the end... They can work even with a pair of lower tier factions.
--- Equestrians Tiers: B- / B+
Had severe issues with the expensive their units are. They were extremely weak early game mostly because I couldn't find that many upgrades. Once they reach late game, they did clearly fine.
--- The Warg Tier: B-
This one faction is not good for orocia map mostly because most of their units favors in forest and open fields. Had a complaint about sprites being a bit too slow considering their low health (maybe +1 movement at all levels and/or few more hp mostly at lv2-lv3). Had complaint about the health of the Lv2 Changelings which is lower than most Lv2 mele fighters. Couldn't afford for a cub wolf (sadly) in this game which was needed to take down enemies at higher terrain defenses.

Found to win in hardcore difficulty with all 3 not so loved factions but with 2 reloads, so it was more or less reliant on luck, except devling faction that at least in my hands are a stable pick and early game carriers. Note that the 3 sides were controled by the same person with perfect coordination and teamwork, so I'm probably lowering all grades by 1/3 of tier in following post (by editing my coment)

Edit: you can move the post if it's at the wrong place, dunno if it should been in AE topic or in Orocia topic or in the ageless faction tiers for survivals.

Edit2: I will add another replay which I've played as Luz, at not loosing units in normal diff of orocia, can consider increasing Luz factional tier to A- considering that it works really smooth.

I feel I'm late with this 2nd part of ageless changelist. If you question me that .txt had like 55-75% of it's actual length like 6-9 weeks ago ago and due a personal crisis during the month of October that work progressed a lot slower than normally.

MERCS - Hive list of changes delayed (removed from part B) due upcoming surprises!!

Views calydonians and expecting only Daioinian swordsman buff, notices [censored] movement costs at rough terrains like cave, sand, swamp, swallow water, coastal rift and others, immediately noticed that this issue was present in all Calydonian faction ... more than 1h of madness with just fixing [censored] unit design... BEEN teached me how to NOT DO unit design

And my experience with Calydonians revision was that maddening that I refuse to include this from part 3 of ageless... at least all this was done in less than 4h... I don't care if I forgot something in terrain property, it can be fixed in 4.20 later and will be among the very first things I will do after 4.19 is free to download.

edit: Apply movement costs for daionian swordsman lv1-lv3 and make Lv3 40% flat defense (instead of 30%) unlike lv1 and lv2 which are 40% flat defense. Castle defense is okey and rest looks okey. And yup, this will be ugly to fix...

Personal data: most annoying stat to fix are movement costs/defense mostly when they're in mass...

I'm just curious why there's no image for the unbounded mummy?
Top

Mummy line was limited to level 0 and level 1 units in archaic era. There is just no separate image for that unit now.

I see image attribute is just missing, created https://github.com/ProditorMagnus/Agele ... /issues/10.
Justice is what happens when someone with a sword kills someone without a sword.


There is a feel of anxiety ... when you have a considerably long list of changes that you haven't yet posted... part D will come later.
Some changes over-writes changes from part A or Part B in some few cases.


I'm lost, can somebody post the list of changes that weren't already implemented? In game it's so ugly seing links because you can't even click or copypaste the URL...

Most of these balance changes are unlikely to be in next version - only if someone implements those in time.

This weekend being planned beginning of 1.14 addon server marks suitable time to get out next version (for 1.12, 1.13, and 1.14). Mostly containing bugfixes.
Justice is what happens when someone with a sword kills someone without a sword.

Hi, a little bit of feedback on AE Dark Elves and Deep Elves. Playing on 1.12
For AE Dark Elves the fighter and xbow lines are both weaker then on AE version. The fighter has no ranged attack and a generic melee only (has a sling for minimal retaliation dmg on AE) it feels weaker then the default elvish fighter. The xbow gets +10% defence on villages compared to AE (which is weird that was the fighter's job while xbow was the offensive playmaker) but negative resists and on t2 tier it doesnt get much love (compared to AE xbow that really makes it worth levelling them). On AE both these units have their uses as for default elvish archer and fighter, on ageless it doesnt feel that way, and buying fighters feels bad as he is very weak compared to what some other factions can pull as t1 melee. Overall I find this faction visually and thematically one of the most coherent and enjoyable but on power level they feel behind.

Sinistra, deeps elves (independent faction) is taken from viewtopic.php?f=19&t=44935 which is the topic of the real creator of the faction. Apart, that the version that is on ageless is pretty much an outdated of his deep elves.

But I can tell you that vault line is obviously overpriced to me, but as a glass cannon impact ranged attacked (with pretty strong arcane mele attack) does fine, just that she needs to be a little more tankier and to cost maybe 1g less.

Riders are meant to be the most "default like" unit in the whole faction, being the unit with most equilibrated stats between health, damage, movement and price. I see no real problem with their current stats, they're a bit low on damage but they compensate with extra movement because they're fairly tanky at lv1.

With Minotaurs I'm completely agree! They seem kind of worthless mostly because of their stone sleep which is really bad if it's not over one village (of yours or in a better case of an enemy) and also the really low damage, being even outmatched by EoMa's golems from Sky Kingdom... because those at least have real 11-2 dmg and 7-3 with charge.

Most of the exagerated weaknesses are fixed in newer versions of deep elves, but as said, ageless used like one of the very first versions of the deep elves and the way to test them is at 1.13.x servers because right now they're not testable in 1.12 servers. There were a lot of balance improvements in deep elves since the last time I've reviewed them.
Creator of: Deathmatch new in 1.12 server.
Developer of: Empires in 1.12 server.
Try My winning Orocia Guide
Top

Compiled new version, planning to upload it tomorrow.
Justice is what happens when someone with a sword kills someone without a sword.


here is a screenrecord of how bugged the unit advancedment of the orcish elder were. havent seen this in wesnoth ever.
https://www.dropbox.com/s/xbgrt57wwog0b ... r.mov?dl=0

EDIT: after that player got heavy oos 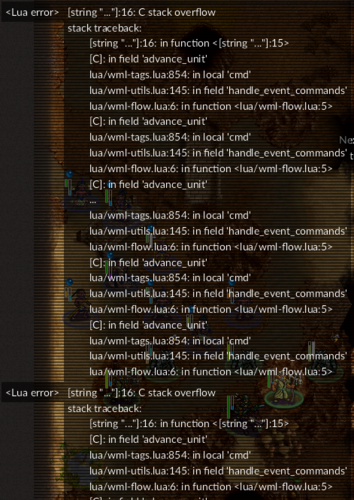