dontano wrote:Once my work is over, I'll send you the whole MP Japan Era. Thanks to your Yōkai, I can finally have a sort of Japan-themed Extended Era.

Looking at them, though, they seem pretty balanced and fun to play with. I've tried several maps with them and I've obliterated almost everything in my way.

I doubt that they will make a good edition to a Japan themed era, since only about 1/6 of the faction units have any sort of relation to Japan. Most of the units are based off of European folklore, and even then my take on the unit is fairly inconsistent to what's written about it in fairytales (ie: The fairies in my faction are winter spirits with icy wings). If you're making a "historically accurate" era I'd suggest you to use the Japanese units and ditch the rest. Your call though.
Yokai
Lunar Alliance
My Artwork
Top

Melon wrote:In completly unrelated news I tried drawing a portrait, though I honestly doubt that I'll ever get around to making one for every single member of this faction.

*tried*? That's nicely done, you definitively have got talent for this.

Shadow Master wrote:*tried*? That's nicely done, you definitively have got talent for this.

. I said tried since it's my first real attempt at a digital portrait in at least two years. I followed Kitty's tutorial for the most part and I think it came out looking alright for the most part. Made another one today since I had so much fun with the last one.

ninja edit: I wonder if I should make a thread in the Art Workshop, so that I can get some pointers on how I can improve these? 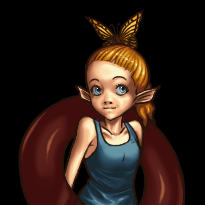 I love this faction...glad to see it's still being worked on!
...please remember that "IT'S" ALWAYS MEANS "IT IS" and "ITS" IS WHAT YOU USE TO INDICATE POSSESSION BY "IT".--scott

An extension to the previous update.

This time it's mainly about small tweaks to many different units that I'm not even going to bother listing.
The more important updates include:
-A major overhaul to the swarm resistances and defense. Now they behave similar to ghosts in that respect.
-The witch is now permanently airborne and behaves as such (ie: the defense values are the same on nearly all terrain types). Her sprite was changed to reflect this.
-Added the portraits posted earlier in the thread.

The picture of the maestro and the diva doesn't show up when choosing your faction on Linux because of case issues.
Basically, all the image names in the faction .cfg's (yokai-EOM,yokai-POWER,yokai-RECRUIT)need to be changed into lowercase eg. "Yokai/Poltergeist_Diva.png" to "/yokai/poltergeist_diva.png".

That being said, keep up the good work.
Top

Where I need to put this add on to use it? Because I put in the directory Wesnoth 1.4.x/userdata/data/campaigns, and nothing, please help me with this.
Mnewton1 code acolite...
Top

You must have Era of Myths installed too.
Author of the unofficial UtBS sequels Invasion from the Unknown and After the Storm (now available for Wesnoth 1.14.x and 1.15.4+).
Top

JuaninJuan wrote:Where I need to put this add on to use it? Because I put in the directory Wesnoth 1.4.x/userdata/data/campaigns, and nothing, please help me with this.

Did you put the cfg file outside the folder? If not then that could be the problem because wesnoth looks for the cfg without going into folders.

EDIT: shadow master posted at same time as me, so if you do still have the problem then this might help.
Latin:LVDVMAMISI (pronounced Loo-dum amee-C)
French: J'ai perdu le jeu.
English: I lost the game.
Top

JuaninJuan wrote:Where I need to put this add on to use it? Because I put in the directory Wesnoth 1.4.x/userdata/data/campaigns, and nothing, please help me with this.

The problem here is mainly the fact that this faction is not a part of any era at the moment. Originally it was intended to be a part of the Era of Myth, but somehow it just never got there. Therefore it's historically meant to function with the Era of Myth already installed. So if you want the faction to function, first download the Era of Myth from the Addon server, then copy and paste the contents of the zip into the users/data/campaigns folder, overwriting any of the files it prompts you to in the process. This should make it function, it does for me anyways (Obviously not online though, unless the people you're playing have a buggered up version of EoM installed as well).

edit: Shadow Master beat me to it.


capricious one wrote:The picture of the maestro and the diva doesn't show up when choosing your faction on Linux because of case issues.
Basically, all the image names in the faction .cfg's (yokai-EOM,yokai-POWER,yokai-RECRUIT)need to be changed into lowercase eg. "Yokai/Poltergeist_Diva.png" to "/yokai/poltergeist_diva.png".

That being said, keep up the good work.

Thanks capricious, I attempted to address the bugs in my newest version.

That being said, here's version 1.08:
Warning in advance: This version hasn't been extensively tested yet, so it might contain bugs and such.

This update mainly focuses on adding more fluff to the faction.
-Changeling Witch replaced by the Tengu. It's a fairly similar unit in terms of stats, but loses its healing ability in favor of the skirmisher ability. Due to their high speed Tengu cannot be chosen as leaders.
-Changeling Occultist renamed to Feyborn.
-Nixies and Mandragoras are now lawful.
-Other small tweaks that I can't recall off the top of my head.

Well this looks like a nice faction, maybe i'll add it in the 1.5.x EE (which will probably have another name).
"Ooh, man, my mage had a 30% chance to miss, but he still managed to hit! Awesome!"

Noyga wrote:Well this looks like a nice faction, maybe i'll add it in the 1.5.x EE (which will probably have another name).

Thanks Noyga! I'll try to make the next release Extended Era specific (Well balanced against the other EE races, e.t.c). I'm afraid that that update may not come as soon as I would like however, since I'll probably have a fairly busy week starting this Monday. If I won't have an update ready by tomorrow it may take a while, though I can't say exactly how long...
Yokai
Lunar Alliance
My Artwork
Top

Here's a somewhat rushed first release for EE. Probably needs a good deal of adjusting before it becomes balanced. But from a technical point of view I think I've got all the coding and the folders sorted out. It should be at the very least compatible and hopefully bug-free.

Gameplay noticeable changes I've made:
-Changed the Tengu sprite a bit
-Added a portrait for the Weaver Matron
-Swarms and Poltergeists are now considered undead (Will probably change this later at some point, since it doesn't really portray the swarms correctly)

If there are any inconsistencies between the two versions aside from what I've noted above, please make sure to report them.

They are just a waste of space (and bandwidth).
Author of the unofficial UtBS sequels Invasion from the Unknown and After the Storm (now available for Wesnoth 1.14.x and 1.15.4+).
Top

Changes:
-Some bugfixes.
-Gave Nine-Tailed fox a weak melee attack and a heavy nerf to hitpoints.
-Changed the damage type for Tengu ranged attack and gave her a weak melee attack (Both this and the above abjustment were made primarily as a response to units with berserk).
-Changed some defense values around, can't recall exactly what off the top of my head.
-Probably some other stuff that I forgot.
-No more thumbs.db (I'm pretty sure I got them all).

edit: quick update that should fix Onryo's soultaker ability (I hope). Replace your soultaker file in your Extended_Era\abilities\ folder