Heir to the Throne: Portraits

To me, the elvish konrad's right sleeve looks a bit flat. Perhaps a bit more contrast?
My spritework can be seen here.

Wow, lots of progress since I left! Just dropping in to say these portraits are amazing!

I was wondering when the great push to redo artwork would get to the big one - Heir to the Throne. Glad to see from the two Konrads that progress is looking good!

I admit, in the beginning I didn't like where I thought things were going. Rather than starting with Konrad and Li'sar, whose portraits may not be in the current house style, but are attractive, I would have preferred starting with the lame portraits, like Delfador and Asheviere. (No offense to the original artists, I just don't care for that style.) And I really didn't care for the preliminary sketches. However, after seeing the first two finished portraits, I see that I judged too soon. Great work!
Ports:
Prudence (Josh Roby) | By the Sword (monochromatic) | The Eight of Cembulad (Lintana~ & WYRMY)
Resources:
UMC Timeline (Dec) | List of Unported UMC (Dec) | wmllint++ (Feb)
Top

Oh my, it's been quite a bit longer than I intended last time I was around… But I come with updates

Two new variants for confused Konrad plus the human gear version of him with the sceptre. Next one in line are the two glad ones. 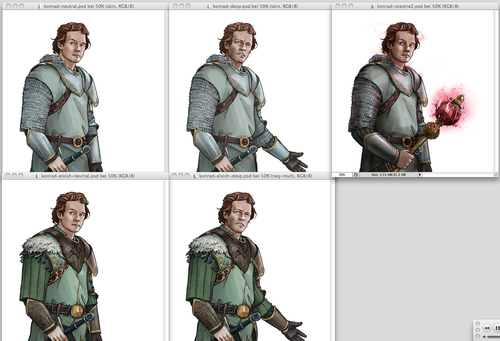 Ah, wow. I have to say, this is all amazing.

One other thing -- from a completely inexperienced person -- the mail hood on the non-elvish Konrads looks kind of... unreal. I think the hood wouldn't be piled up so much.
Timshel
Top

That scepter-wielding Konrad sure looks intimidating.
Author of the unofficial UtBS sequels Invasion from the Unknown and After the Storm (now available for Wesnoth 1.14.x and 1.15.4+).
Top

You may or may not be right, but we are also seeing it against bright, blank, phony background. Blood-like is fine for a ruby, I'd think. At least for most of it.

If it is supposed to be a glowing torch-like thing, shouldn't there also be some orange on his metal and face?
BfW 1.12 supported, but active development only for BfW 1.13/1.14: Bad Moon Rising | Trinity | Archaic Era |
| Abandoned: Tales of the Setting Sun
GitHub link for these projects
Top

Not much to say other than praise. Great stuff!

While this is good work, and I said so earlier, on second thought I might have some reservations.

First, none of these portraits depict Konrad with a cape. Konrad's sprite has a cape, but not his old portrait. However, Northern Rebirth's introduction mentions "his cape streaming in the breeze," for what that's worth.

Second, while the stubble on the non-elvish Konrad is a nice touch, I see him returning to a more clean-shaven look once Li'sar is around - say, after they get out of the caverns.

Uncleshelby: Honestly I have no idea on how chain mail hoods behave. Perhaps Lordbob will comment on this issue when he stops by again.

Groovy: I slightly adjusted the effect - a bit less blue in the red, but I'm not sure about it I liked the more blood-like appearance as well.

Groggy Dice: Thanks for the input! For the first issue you raise: Similarity with the sprites isn't an issue here, those will be reworked after these portraits are done. Quite the other way round from the usual process. And providing a third iteration of human glad Konrad with better hygiene seems excessive to me, it would mean another five pictures for a very minor detail (albeit producing those would be pretty trivial).


Six more portraits (or portrait variants):
Konrad glad human, Konrad glad elvish, Konrad leading human and Konrad leading elvish. Originally I had a separate mad portrait planned for him but now I think that the leading one could be used for that emotion as well. Anyways he has got nine portraits now, more than any other Wesnoth character I can think of! And I painted neutral and leading Li'sar. She'll get at least three more variants.

And then it will be time to think about the secondary characters - zookeeper, could you compile a list or would it make more sense to speak some time on irc? In any case a couple of variants for Delfador will be a lot of fun! 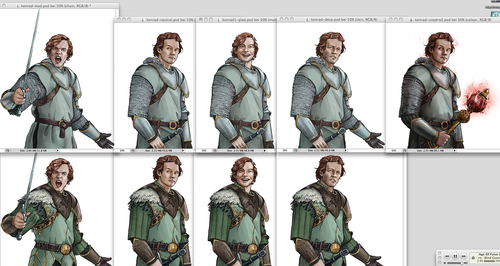 I had some reservations about Li’sar based on the flats in page 1, but as usual, lighting makes Wesnoth portraits look much better in the end (to a non-artist like me, anyway). Great job!
Author of the unofficial UtBS sequels Invasion from the Unknown and After the Storm (now available for Wesnoth 1.14.x and 1.15.4+).
Top

My reaction to the new Li'sar portrait: "Woooooooooow" ( and "Hot"

kitty wrote:And then it will be time to think about the secondary characters - zookeeper, could you compile a list or would it make more sense to speak some time on irc? In any case a couple of variants for Delfador will be a lot of fun!

As I said once on irc, I don't think the HttT portrait roster really needs any additions; all the characters who currently don't have a portrait appear or speak exactly once in the campaign, with the exception of Moremirmu and even he isn't relevant to the plot in any way. Even Parandra (the head of the elvish council) doesn't in my opinion warrant a unique portrait because she only appears in one scenario, isn't as much as mentioned in any other mainline campaign and no one else uses the generic elvish lady portrait in HttT.

As for expressions, I have a couple of ideas.

Delfador:
1) Angry, intimidating, maybe his staff sparkling with lightning.
2) Mentoring Konrad. There's a lot of dialogue where he recites history, tells about different places and such. For example, he could have an unrolled parchment in hand and look like he's explaining or teaching something to you.

Asheviere:
1) On her knees, wounded and defeated. Used for the last words.
Top
Post Reply
126 posts