Apologies for the non-constructive comment, but wow did those attack animations turn out to be incredible!

The dynamics of the cloak and the smoke trail at the end are done perfectly. Beautiful work!
"I'm never wrong. One time I thought I was wrong, but I was mistaken."
Top

Thanks to you both. Nice words are welcome and it's good to know it's appreciated.

I have implemented the shooting into the game and it seems to be working nice. There also was a fault in the WML with the S and SE frames in the original muzzle flash animation that I found and corrected. I won't post the files just yet. I don't see any point as I am almost done and will post it all in one go soon... For now here's run & blade gif's.

One thing that bothers me in the running animation is the patch of shadow underneath the hood; because it has such high contrast and a black outline, it kinda looks like a striped cloak or worse, a hole in the fabric. Either way, it's a bit confusing

Other than that, it's looking great.
Want to see more of my art ? Visit my portfolio !
Top

Hmm I can't see that. Maybe we have different monitor settings or something... I brightened the area under the hood anyway, which should indeed be brighter anyhow as the cloak is billowing up from the running.

After testing it all several times and fixing certain frames corrupted TC colors (A few frames being mysteriously semi-transparent) I think it is done now. Despite that it's possible I might have missed something as past experience has shown.

Crap, of course I missed something, the halo effects files... Anyhow, here they are in a separate archive.

I've watched the original on a brighter screen and you're right, it was indeed better. Either way the new version completely removes the effect, which is just fine.
Congrats on finishing the series

I've been silently admiring the progress on these animations so far. I think now it's time to say a big "congratulations".

Thanks to you both, I'm happy to have finished it... Now there's 2 more dwarf lines to go.

Here's a bonus animation I wanted to do, played after killing an enemy unit.

Sleepwalker wrote:Here's a bonus animation I wanted to do, played after killing an enemy unit.

I don’t normally post praise-only comments on the art forums, but I simply love this animation. ♥
Author of the unofficial UtBS sequels Invasion from the Unknown and After the Storm (now available for Wesnoth 1.14.x and 1.15.4+).
Top

Oh that is awesome!
Campaigns: Dead Water,
The Founding of Borstep,
Secrets of the Ancients,
and WML Guide
Top

Great, just the final move of the head back in standard position looks a little rough.
Maybe there needs to be an extra frame in between?
Top

Alright, I added a frame. It's smooth enough now I believe.

... I've been checking up on the work Cloud and rhyging5 have done on the guard line and berserker. Cloud hasn't been around for awhile so I could take up where him and Jetrel stopped... I'll leave the ulfserker line alone for now in case rhyging5 wants to continue with it after the troll. If he comes back that is.

Alright, here's what I got on the guard now. I made some minor touch ups on lvl 1 and 2 baseframes and gave the lvl 3 some more differentiation with a breastplate. For the NE base frame I started modifying Clouds one. I ended up with almost everything changed to better match the SE original.

You'll notice that the javelin holder isn't visible on the SE frame as it is blocked by his helmet... But I don't think it is a big deal. It will pop out during animations anyway. I tried having it visible and slung in another way but composition-wise I never liked the results I got.

Also made the first run animation... I think having the javelin bag improves the 3D feeling of the animation in a way. 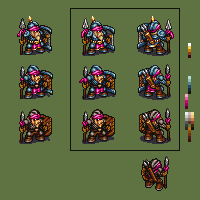 The guardsman have been put on hold for now for financial reasons, It will probably be taken up again in an undetermined time.
Sometimes we must be hurt in order to grow, fail in order to know, lose in order to gain, and sometimes we must have to be broken so we can be whole again...
- Nercy Masayon
Top
Post Reply
224 posts