A while ago I read that this forum had a Wesnoth-style in the past, which got deactivated because newer phpBB broke it.
I never really liked the proSilver style (subSilver looked much nicer

) and I was curious, so I tried hunting down this style and got lucky.
Installed an old phpBB3.0, an even older php5 to run it on, and set up a vhost for this. And that's what it looks like: 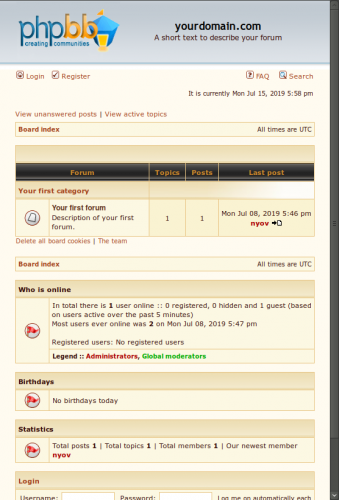 (Can anyone confirm this is what it looked like -- except for the standard header of course?)


There I was thinking, that doesn't look like much.

That's pretty much a standard subSilver2 layout with a custom color scheme and some changed icons.
I had kind of hoped there would be this cool Wesnoth-theme that I could bring back to current phpBB.
(Well I always liked subSilver better than the later proSilver theme, but it's a thing of the past in todays "responsive" layout world.)

So then I considered doing a theme myself, by editing proSilver and using ingame Wesnoth art.
But before I even look down that rabbithole, the question is: would anyone care?
Doing this for myself could be nice, but ultimately a waste of time. Same if people cared but the admin said "nope. no theme uploads here". Heh.

And then, what could or should it look like? I do not have a finished vision in my head.
I know what's possible and some things can only be changed through HTML templates, but I would stick mostly with CSS+image modding.
So it can't be much different from now, layout-wise (because have to keep "compatible" with the responsive-layout stuff for small screens).

However, it would certainly be a pixelart design, using ingame ressources, because disclaimer: I'm not an art person.
I can only magic already existing pixels to the right place, and in this case all the ingame art is pixel stuff, not vector art.
I could take some suggestions or mockups into consideration; buttons, checkboxes, what ingame pixels might be (re)used where or how.
But ultimately I'd need to go with what's workable, and I'd be doing gradual changes. Because thats my style and otherwise I'd never finish. In that venue, here's a little gradual start I made (just borders and the main-page background), to see if I would have fun doing that:

Sorry, have no small-screen shot handy.

Which brings me to the bad things to keep in mind: (if there is even interest)

Pixel style and responsive layout easily clashes, because pixel art doesn't scale well. And I can only try to make it work, but it might not, and then it could be a style limited to big-screen users. (Of course there's no need for it to be the default style, in any event.)

I haven't done phpBB themes in over a decade, so while surprisingly little in phpBB theming changed, all things considered, there is still the chance I wouldn't finish the project. A lot about web layout has changed in a decade. Responsive webdesign and mobile-first favors the vector art over the pixel-art. And modern high-dpi screens bring possibly even worse pixel-scaling issues. I don't even know.
As a result, the web has become flat and boring, I think. To fit the biggest common denominator, everything tends to looks the same now: what fits on a mobile screen. It's quite sad, but it's also hard if not impossible to build a theme around pixelart which fits every device, these days. Please don't expect one.

I'm offline the next few days, so I'll be interested on the response once I'm back.

That screenshot is indeed the last version of the Wesnoth theme we used with phpBB 3.0. It was originally a bit more involved and had some Wesnoth graphics in it back in Q1/Q2 2008, but it quickly devolved over the course of the same year into a subsilver2 recolour, probably because of the maintenance burden it created on the template side of things for the forum platform admin that was in charge at the time. (Some people also complained about the graphics IIRC.)

Thanks to the power of both Web technologies like CSS and the many changes to the style engine in phpBB 3.1 and 3.2, these days it’s far more feasible to develop almost entirely pure CSS-only styles that inherit from a template (say, prosilver) to make them properly maintainable without placing a burden on extension authors. Notably, the prosilver-based version of AcidTech that replaced the old subsilver2-based version following the phpBB 3.2 upgrade can be handled just fine by almost all extensions we have in here without any modifications to them. There is a few custom Wesnoth.org-specific modifications to all of the styles currently available, but it’s all QoL stuff and nothing major that can’t be easily ported onto other styles as the need arises.

Still, I do have to warn you that I’m not willing to include a new style if it doesn’t bring something new to the table, because it still means that if anything changes upstream in prosilver’s template or CSS, someone (me) has to keep track of what updates need to be made to it if any at all. The only reason I made a concession with AcidTech was that we had a compelling need for a dark style. Ideally, if we were to see a new Wesnoth theme it would have to become the new default and be something that brings phpBB more in line with the Wesmere design beyond a simple palette switch — the latter being something I did briefly consider since there’s an online tool that makes it trivial to obtain recolours of any styles from the official phpBB database, including prosilver Special Edition which is our current default.

Also, pixel art can be made to work if you think outside the box, but it doesn’t make for an appealing style for general UI elements, which is a lesson that the Wesnoth dev team has gradually learned over the years. And because it’s usually not doable in pure CSS, it can also noticeably increase page load times/bandwidth/data usage on the client’s side if you don’t happen to be one of those lucky few connected to the Internet via unlimited fibre.
Author of the unofficial UtBS sequels Invasion from the Unknown and After the Storm (now available for Wesnoth 1.14.x and 1.15.4+).
Top
Post Reply
2 posts • Page 1 of 1