I was updating my voidlinux installation, and noticed a wesnoth's update. Willing to know more about that, even if I no longer plays a lot, I tried to use firefox (v 60.6.1, it's the "long-term support" (I suppose not breaking stuff every 3 month is long term in webdev...)) to check on the logs, and discovered that the main page makes it crash. Well, I'm no longer suprised to that kind of things, and firefox was also in the update list, so, I just made it stop before fully rendering the page, with good timing it at least allows to show various links, so that I could go here to try report or at least ask about that... but creating a thread did the same.
I tried to swtich to chromium, same behavior.

Thus, I am using dillo, which does not support JavaScript, and can access this area, even if result is *really* ugly (just trying netsurf: much better, should do that 1st next time). I suspect that there is something strange in the JS code, somewhere. Can't really say what, not a webdev, however I have various suspicions considering my system.

This is the voidlinux based on musl, using "nouveau" drivers. Kernel version is 4.19.27_1, I know by experience that nouveau does not uses my old GPU correctly: NVidia drivers are much more efficient, but AFAIK they are not released for musl, especially considering the fact I'm using a quite old GPU (GeForce 8400 GS).

So, my bet would be that maybe forum and mainpage use some hardware acceleration that makes "modern" (or should I say, bloated?) browsers crash.

Just saying this here to check if someone had the problem, and otherwise, so that it me be known. Now, I am not that suprised: voidlinux is a rolling release, musl is not the most widely used libc, I'm using old GPU with a driver that barely does it's job because the official one does not exists (with compat regarding the libc, I mean). Last time I checked, I had no problem on Debian with NVidia driver, same hardware. And just so that it have been said, wesnoth works well on those conditions as far as I can tell.
Top

Freem wrote: ↑April 19th, 2019, 5:22 pm This is the voidlinux based on musl, using "nouveau" drivers. Kernel version is 4.19.27_1, I know by experience that nouveau does not uses my old GPU correctly: NVidia drivers are much more efficient, but AFAIK they are not released for musl, especially considering the fact I'm using a quite old GPU (GeForce 8400 GS).

In Firefox preferences you might want to try unchecking "Use hardware acceleration when available" and see if that makes a difference. 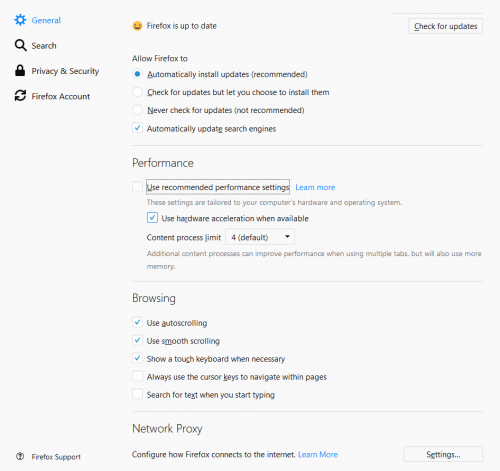 (Screenshot is from Windows, but I'm pretty sure the same setting exists under Linux.)
Top

Freem wrote: ↑April 19th, 2019, 5:22 pm So, my bet would be that maybe forum and mainpage use some hardware acceleration that makes "modern" (or should I say, bloated?) browsers crash.

Nothing special compared to the rest of the website. If your browser can manage to cause your computer to crash or hang while rendering our front page then there’s something wrong with either your drivers or your hardware. Also, unless the problem stems from the YouTube embed then odds are that it’s triggered by a specific combination of CSS rather than Javascript.
Author of the unofficial UtBS sequels Invasion from the Unknown and After the Storm (now available for Wesnoth 1.14.x and 1.15.4+).
Top

Every now and then my ISP raises their hand and admits that they run a transparent proxy for all web traffic by putting up what-they-think-are-critical messages. And every so often one of the kids working for them messes up and their message crashes whatever web page they're vicimizing. With all the security junk on my systems, I never see it, but the wife hates using my systems because she can't go to all of her handicraft sites (you know the type, "Create your OWN site in 10 MINUTES!!!!" They're crap and I point out the reason she can't see them is thay my security systems can see they're crap. But she insists, so her systems can show them. So, between her crap sites and the noobs working at the cable company, every now and then, she lets out a holler and I have to go 'fix' something (usually by closing the tab and telling her not to do that, again).

I agree with shadowm, it's almost certainly your system, somewhere. Like her, I'm on this site every day and would see if there were something borked in the landing page or forums.
I forked real life and now I'm getting merge conflicts.
Top
Post Reply
4 posts • Page 1 of 1