Please find attached a screenshot from 1.11 showing the new Planning Mode feature, heretofore not shown on the screenshots page. I know that feature existed in 1.10 but i dont have that version installed anymore.
I would like to add some more screenshots if you could give criteria for what kind of images should be there, and how they should be formatted. For example i see they are all 1024x768 PNGs.
My contribution uses a file naming convention extended from the ones there which seem to be all "wesnoth-x.y.z-n.png".

Secondly, i could help create a page to document the desired format and method of contributions to that page. 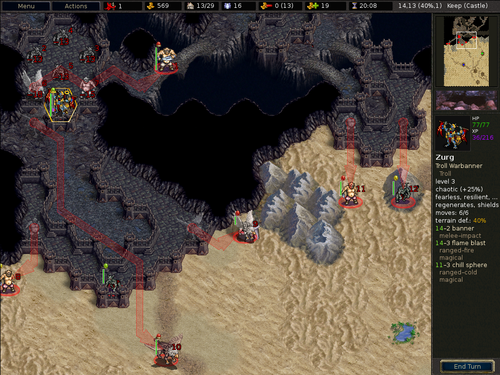 The “take the initial screenshot as bmp” part probably stems from the fact that Wesnoth’s built-in screenshot functionality (not bound to any key sequence by default) uses this format, but you could probably use any other screen grabbing application provided that: (Note that “hardware cursor” above means you should turn color cursors off in Wesnoth’s Preferences → Display section if necessary.)

I don’t think you should bother with the thumbnail generation step yourself(ves), since that’s trivial enough and can be done by the uploader, who will probably be someone one of us admins.

As for the criteria for making the screenshots, I guess anything that can be used to promote the game and showcase its primary features should do. It might be a good idea to use only mainline content for this purpose.
Author of the unofficial UtBS sequels Invasion from the Unknown and After the Storm.
Top

Is there still a need for screenshots?

If there is, I'd be glad to help.
Creator of the Era of Chaos and maintainer of The Aragwaithi and the Era of Myths.
Wesnoth-UMC-dev, a nice place for add-on creators.
Top

I mean, otherwise new screenshots would’ve been posted in this topic or something, right?
Author of the unofficial UtBS sequels Invasion from the Unknown and After the Storm.
Top

here are a few to upload, each with notes about significance: it would be nice to upgrade the screenshots template slightly: perhaps add some captions. stock mediawiki now supports image annotations, which could be handy for pointing out new features and linking to their description.
Top

UtBS has been mainline for a long time. Long before 1.10.
BfW 1.12 supported, but active development only for BfW 1.13/1.14: Bad Moon Rising | Trinity | Archaic Era |
| Abandoned: Tales of the Setting Sun
GitHub link for these projects
Top

Also, UtBS's art is last generation, it doesn't represent the current Wesnoth very well. Action shots would be awesome, one of my favorites from the site is the Delfador lighning bolt one

ah yes thanks, perhaps i was thinking of Khalifate faction (which was added and removed during the 1.9 cycle i believe).
we would definitely want to show the latest and greatest and some interesting action. i also wanted to add dialogues and art that havent appeared in previous versions' screenshots.

should everything be in English or could an Irish screenshot appear to highlight the new language added in 1.10? or should each language have its own set of screenies?
Top

We also have a bunch of 1.10 screenshots from the release announcement. This includes one of the planning mode. Click on them for the full, properly formatted view.

And for terrain comparison, I created two for Desura. Cynsaun and Isars. Though those are not in the proper format.
GambCiv | Tweet Tweet | My IRC Channel | Some of my projects
Top

tr0ll wrote:ah yes thanks, perhaps i was thinking of Khalifate faction (which was added and removed during the 1.9 cycle i believe).

Or perhaps you were thinking of Dead Water (added to mainline in 1.9.0)?
Top

Okay i will make one for Dead Water.

Btw where is that Release Notes for 1.10 page linked from? I was looking for that kind of thing but resorted to reading the changelogs when i couldnt find it.
Top

One of those is made and announced on the homepage for each new major stable branch.
GambCiv | Tweet Tweet | My IRC Channel | Some of my projects
Top

I never heard back from either Ivanovic or tr0ll, so I went with the first and third images from this post, took three screenshots from 1.11.6, and uploaded and added them to the Screenshots page in the wiki. I didn’t use the second proposed image for 1.10 since UtBS was actually added to mainline in 1.1.2, and the portrait shown is obsolete and pending replacement.

Ideas for more screenshots welcome (or even better, post your own screenshots following these specifications). I had considered showcasing some of the new portraits in-game, but it turns out that the [message] implementation looks like crap at 1024x768. I was going to take a screenshot of the HttT entry in the campaigns menu as an alternative to that, but there is so much empty space in the dialog due to the short description, it looks far from appealing to newcomers.

EDIT: Oh yeah, we certainly need suitable replacements for the front page screenshot for 1.10 and 1.12.
Author of the unofficial UtBS sequels Invasion from the Unknown and After the Storm.
Top

shadowm wrote:EDIT: Oh yeah, we certainly need suitable replacements for the front page screenshot for 1.10 and 1.12. 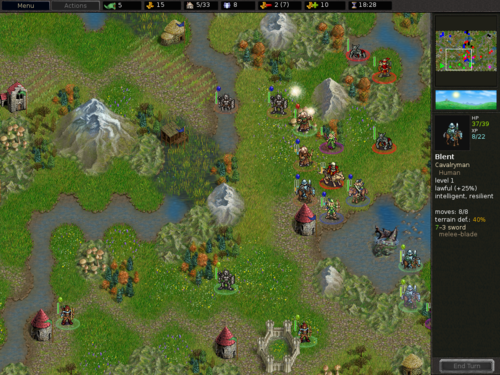 Opinions?
Author of the unofficial UtBS sequels Invasion from the Unknown and After the Storm.
Top

I have added these three to Screenshots and chosen the first one to be the front page one for 1.10.

Author of the unofficial UtBS sequels Invasion from the Unknown and After the Storm.
Top
Post Reply
16 posts