This is Gwledig, I had a break from Wesnoth multiplayer mods for a while but have updated my mods to work on the 1.14 server and hope to maintain them into the foreseeable future. Look for these on the Wesnoth 'add ons'. The updated mods include:

Conquest - original gameplay/ aka Conquest Classic - based on the board game RISK where you seek to control 'regions' for bonus gold and right-click any vila to recruit units. For those of you who remember Conquest, going back about 10 years now, it's one of the best mods on Wesnoth, originally made by Blueblaze, it's seen input by many modders over the years. This is the version I build almost from scratch to reproduce the exact same gameplay and units to work on later versions of Wesnoth. Conquest also has boats (right-click vila to recruit boats, can only move onto water, you can load a unit into a boat to transport - put unit on vila, put boat next to vila, right-click boat to load/unload back on any vila). 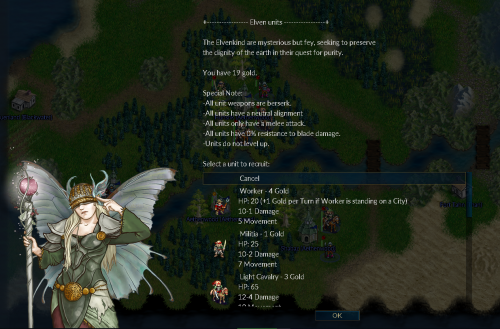 Conquest+ - a version of Conquest which was controversial as it introduced shops to buy upgrades (put unit on any vila and right-click to access 'store'), fortifications (make a 'builder' unit, move where you want to build, right-click builder to 'build' then select the fortification) the builder unit is lost, these fortifications can be attacked but can't initiate attacks or move of course. The 'magus' is a spell-caster (right-click mage to create a fireball which can be positioned to attack an enemy or select 'summon' to summon a creature), the magus can also teleport between vilas. The mod also adds many additional races (Rift - a demonic race, Celts, Romans, Outlaws, Pirates, Feudals, Beastmasters, Amazons etc. with special abilities - e.g. zombie spreads undead plague). 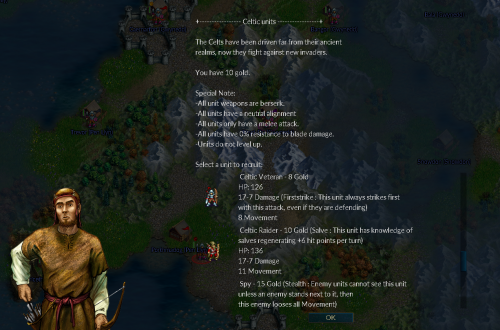 Conquest+ Space (Ranged) - another version of Conquest set in space, with new space factions like Imperium, Zygons, Eldor, Chaoz, many units have ranged weapons which work like the magus in Conquest+, i.e. right-click to access 'ordinance' such as blasters and missiles which can be moved to attack an enemy, transports such as tanks and starships sometimes have ranged weapons and work like boats, can only move on the 'void' to transport units between planets). The mod also has an 'Nuke silo' option which can fire devastating missiles over long distances, with area-damage and a defensive grid which can be positioned to provide an anti-nuke radius. Fortifications in the space version look like floating forcefields, the mod also features boats and aircraft (also with ranged weapons/missiles) which can fly over land. 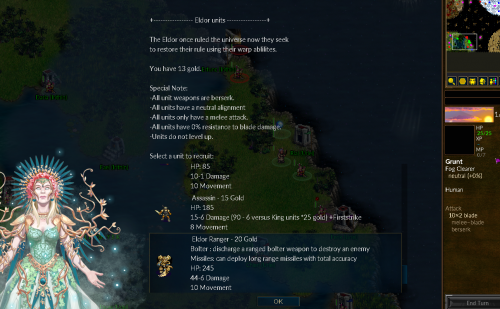 Chaoz - battle of the wizards - based on the classic turn-based game, Chaos, you control a wizard and can (right-click) to summon monsters, cast spells and enhance the wizard, wizards have an ethos such as Law, Chaos etc., the mod features ranged weapons similar to Conquest+/Space where you right-click (e.g. bowman), select the ordinance then move the shot (e.g. arrow) to attack an enemy. Random maps are also available. 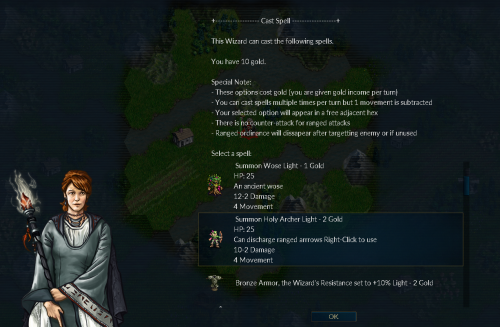 Lazersquad - this is another game based on classic games such as Rebelstar and Lazer Squad, turn-based squad games, you control a few elite marines with ranged weapons similar to Conquest+, you can right-click vilas you own to recruit further 'mercenaries', these have a range of specialist weapons, including a ranged bazooka which does area damage. Random maps (caves) are also available. There is also a cooperative map with spawning aliens in the middle of the map. 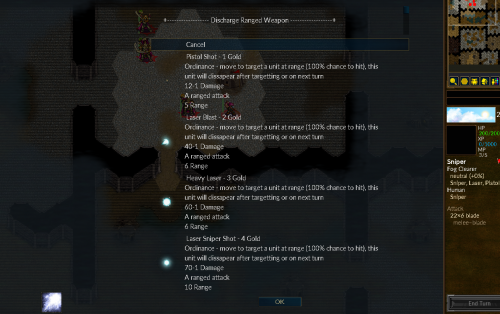 Wescraft (build your empire) - Wescraft is inspired by RTS type building/battle games such as Warwind and Total Annihilation Kingdoms, you have a powerful king unit and start with a builder, you can use the builder (right-click) to build structures such as barracks, stables, workshop etc. these can be positioned within 5 hexes when built (unlike Conquest+ you don't loose the builder unit), you can right-click structures to build or recruit units, transports or upgrades, the mod features an upgrade tree similar to Age of Empires, with dependent technologies needed to make some units or access further technologies, you need for instance metalurgy and gunpowder to recruit units with firearms. You can also make a wizard tower to recruit a range of mage types with different spell, summon, cursing or enhancement specialisms. The mod features ranged combat/offensive spells and I have re-inserted transport boats which work like Conquest+ but units don't need to be placed on vilas and can be loaded/unloaded from most normal terrain (excluding the King which can't be boarded on boats). Structures can also be attacked or demolished by the player, the builder can also engineer terrain to a required type and build bridges (right-click to access engineer options). There are two ways to accumulate gold - capturing mines or building farms. Random maps are also available. 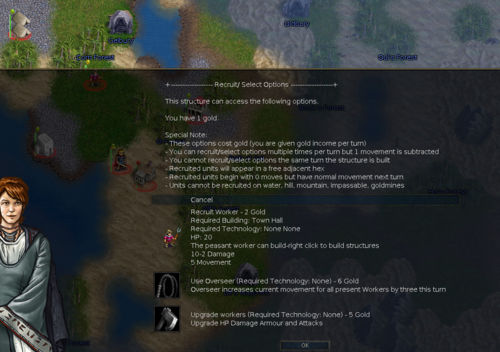 I will be updating on Conquest/Conquest+/Space in my main Conquest thread mentioned above, and in the respective Wescraft, Lazersquad and Chaoz threads mentioned. Please feel free to bookmark/subscribe the threads to get updates and find out when new versions are released, I welcome any feedback/ bug reports or suggestions.
Maintainer of Conquest (Original Gameplay), Conquest+, Conquest+ Space/Ranged, Chaoz Battle of the Wizards, Lazersquad (squad game), WesCraft (building MP game)
Top

Conquest (Original Gameplay):
Intro: I think it would be better that you say VILLAGES instead of VILAS, for easier understanding.

When you put workers on villages, they don't give income as they are supposed to do.
Top

Gwledig wrote: ↑July 18th, 2019, 7:46 pm This is Gwledig, I had a break from Wesnoth multiplayer mods for a while but have updated my mods to work on the 1.14 server and hope to maintain them into the foreseeable future. Look for these on the Wesnoth 'add ons'. The updated mods include:

I look forward to playtesting these.

Intro: I think it would be better that you say VILLAGES instead of VILAS, for easier understanding.
Where are Dwarven Doors? (I see that it is Wesnoth, so Dwarven Doors aren't there)
When you put workers on villages, they don't give income as they are supposed to do.

I think the vilas term is just tradition in Conquest so I have kept that terminology from the original game...
I'm honestly not sure what the dwarven doors are, they were not in the Wesnoth conq map, perhaps this is part of the main game I am not familiar with...
I'll certainly test the workers stuff and do an update to conq versions, if it's not working on conquest classic, it may be failing on conq+ and space version, I will post back when I figure it out.
thanks!
gwledig
Maintainer of Conquest (Original Gameplay), Conquest+, Conquest+ Space/Ranged, Chaoz Battle of the Wizards, Lazersquad (squad game), WesCraft (building MP game)
Top

Gwledig wrote: ↑July 18th, 2019, 9:46 pm I'm honestly not sure what the dwarven doors are, they were not in the Wesnoth conq map, perhaps this is part of the main game I am not familiar with...

You can see them here, halfway between the Ford of Abez and Lake Vrug:
https://github.com/wesnoth/wesnoth/blob ... s/httt.png
Top

Hm workers seems to be ok in conquest classic e.g. in the example below I recruited 2 workers, making +2 gold, I had 1 gold left on the end of turn 2, my base income was +5, by turn 3 I should have had 8 gold, 1+5+2, and did indeed have 8 gold, I think the folks commenting probably thought the income table should show the extra income, but this is done in the WML and is not reflected in the normal game engine's income... 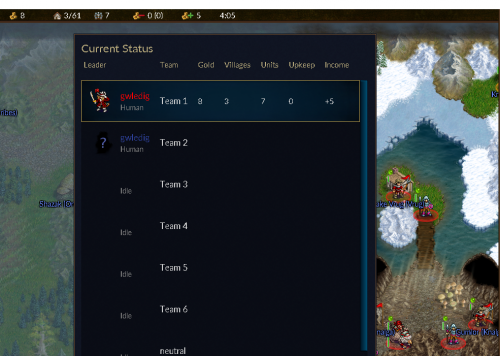 I assume that if you do [modify_side] income=10, that'll be reflected in the status table.
Top

this is the current worker special wml for your interest, I can certainly have a look at making it so the worker's income shows up properly in the status table...