You no longer have to make an effort to be an efficient troll. This mod does it all for you. It is an advanced trolling simulator that will ensure your game has the atmosphere that we all love online video games for. 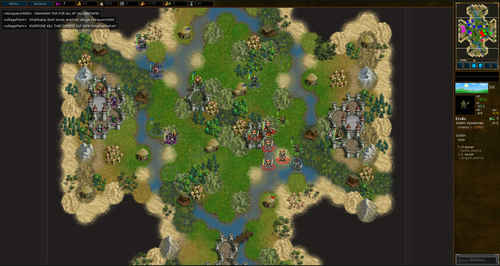 Update 1.2 fixes a lot of things -
-Fixes a bug that would make the game freeze for a bit on messages related to the killing of units, except for player 1's.
-Fixed many messages that would either taunt an AI player or have an AI player taunt another player. AI should no longer be the object or perpetrator of ridicule.
-Lower/upper cased some unit names, nicknames etc in order to make the text look more consistent.
-Trolls will no longer complain about a player not ending their turn after the game is over.
-The mod will now properly react to players hotjoining/leaving or sides being droided by updating nicknames and adding/removing sides from the equation.
-Removed player names and colours from taunts that are displayed when a unit is placed on a low defence tile, because that would give away people's factions.
-Some corrections for certain unit types during the weak terrain trolling.
-Messages are now consistent across all clients.

I've updated the screenshot because of the lower/upper case addition.
Top

1.2b fixes a HORRIBLE BUG that had disabled the trolling lock effectively rendering the trolling intensity slider useless and making everyone spam like hell.
Top

1.3c fixes another bug that had made the game not recognise human players if there were any computer players before them on the list of players.
Top

Man, that's a huge screenshot. (That's what she … nevermind.) I take it you never learned about cropping when your grandma taught you how to use image editing software.

Whoa, where did all that come from? It must've been this thread — as if it awoke something in me. Something dark and snidely which hides in caves.
Top

Can-ned_Food wrote: ↑March 11th, 2018, 3:14 am Man, that's a huge screenshot. (That's what she … nevermind.) I take it you never learned about cropping when your grandma taught you how to use image editing software.

Whoa, where did all that come from? It must've been this thread — as if it awoke something in me. Something dark and snidely which hides in caves.

Yes, she didn't teach me that part and she is dead now. Sorry.

Oh, by the way, this mod is a bit broken. I struggled long and hard to get rid of the OOS issue, but it still happens. There is one more thing that could work but then it would make the mod instantly go OOS without a timer. It appears the Wesnoth engine can't currently handle things of this sort.
Top

Okay, maybe the mod isn't broken now. The oos issues seem to be gone and I've changed one thing in version 1.5. If you are getting OOs in 1.5, it means you have to play with a timer.
Top

Version 1.6 aims to remove Oos and sync the trolling messages. Whether it has completely removed it, still remains to be seen (in multiplayer), but the games no longer break on start. I'm going to host some test games and update this message.

UPDATE - The mod works, but only if you use a timer, at the moment. Otherwise you'll get oos. This will change in 1.7.
Top

Version 2.0 -
Finally, the OOS is gone. The mod has been rewritten after some extensive testing. Big thank you to duuuude for the help!
The conclusion is Wesnoth MP is not able to handle a timer that refreshes every 10ms changing the game state. The oos
would result from a 10ms discrepancy in the timer state between clients which would disable the "trolling lock" on some, but not on other clients,
so trolling messages would trigger only on some clients.
The mod now only uses the timer for syncing things which aren't gamestate changing.
The trolling intensity now controls the amount of messages that can be displayed during a player's turn, not the interval between them.
However, they still only appear if there's a reason and the same type can't appear twice in a row.
I've also fixed a lot of bugs affecting the trolling messages themselves, most importantly:
The weak terrain troll - which also can't happen before turn 5 (so no faction data is revealed at all).
The rng troll - fixed it working inversely
The village troll - The player losing the village can't be mocked by their teammates (or himself

2.0b-
Added a further protection against oos on the hurry up troll event (that is if a player doesn't finish their turn in 200 seconds)
Top

Hi, I'm NOT Choicerer, but I'm also making add-ons, and we are all different but..
I did abandon 1.12 and not updated anything for 1.12 because it doesn't make much sense...
The code is not compatible.. so if anyone of us would want to upgrade versions on 1.12, then we would need to code everything twice, which would be quite a nightmare... We basically all just have to choose, work on 1.12 or work on 1.14...
1.14 has more tools, more players... and this is where everything will be happening for the next couple of years... so choice is quite obvious..
It's sad if you can't use 1.14 for some reason... but this is the only future..
Top

Enclave wrote: The code is not compatible.. so if anyone of us would want to upgrade versions on 1.12, then we would need to code everything twice, which would be quite a nightmare... We basically all just have to choose, work on 1.12 or work on 1.14...

I did not update 1.12, it's true. My code is currently comptabile with both versions, and keeping it compatible is actually quite easy because you can use peprocessor and lua conditionals to check the version inside your code. Yes - it is some extra work, but not so much if you use Lua. There aren't that many new functionalities so you just modify your code in key places. Under Linux it's very easy to use the same files in different versions, too, thanks to symlinks (no need to copy anything. Vasya gave me the idea).
I'll definitely update 1.12, it's just that my impression was it was slowly dying... Last time I logged in there were 5 players in. Eventually I'm going to ditch 1.12 support, but as long as there are people playing 1.12, sure.
Top
Post Reply
24 posts