Something i had shown some time ago. I know caves need same treatment as dwelve,what else is there to be done ? 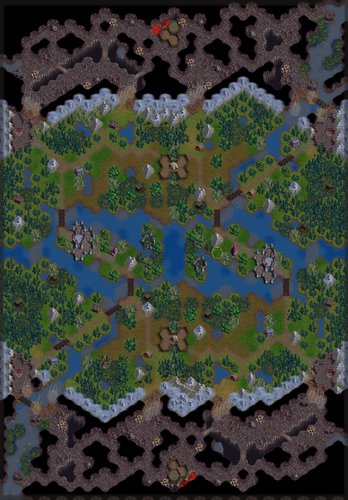 Interesting map, could be fun for team play. I wouldn't play it with six independent sides as the starting locations don't seem balanced enough. Four sides might work if they all started in the castles at the cave mouths. I'm not sure about the caves, they're large which gives a lot of advantage to factions that can move quickly in them but they're not on the direct route between the starting castles. As those castles have mountains to protect them and villages behind them to heal in, an assault would be very hard unless you also deny the defender the use of the cave, that looks to me too much of an advantage for cave-capable factions.
Top

There is too much forest on both map sides, I actually suppose that a top vs bottom MUs will be played there. The forests are abusable for elves, which are too strong on the sides on the map. and the cave "backyard" is only useful for village grabbing, there isn't any fighting over there, so it is the least important part of the map (and no leader will move to the backyard keep).
Top
Post Reply
3 posts • Page 1 of 1