Re: Temuchin Khan's maps - What do you know? 4 more Agaia m

I added some additional comments and information to the posts of my last four maps. I'm probably also going to post three variants on Agaia Crisis sometime this month. I've always wanted to give a little more detail about what was going on and the depth of that crisis.

EDIT: I changed my mind and only made three Agaia Crisis variants. The fourth one just seemed superfluous.
Check out my maps!
http://forums.wesnoth.org/viewtopic.php ... 3&start=15
Top

I have finally completed the Agaia Crisis variants I promised, although in the end I made only 3 rather than 4. Still, I think each one helps to flesh out the time of crisis better. 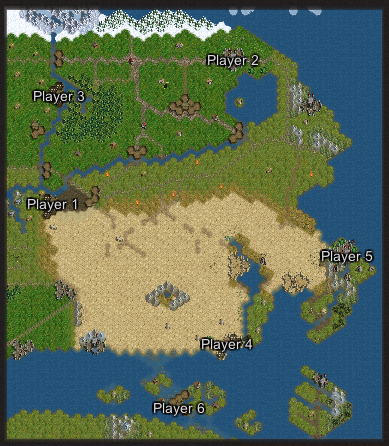 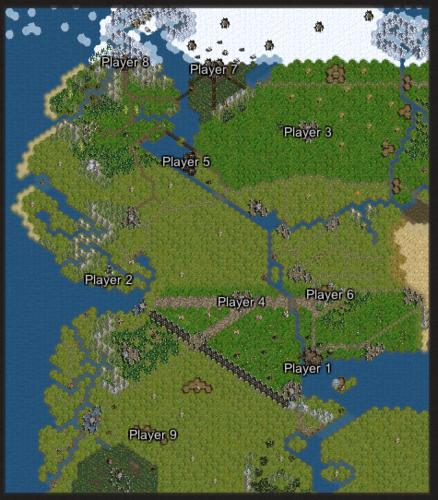 Re: Temuchin Khan's maps - What do you know? 4 more Agaia m

And finally, the most thorough look yet at the southeastern tribal regions:

Nice! I would suggest that you make the different sides on the same team using a simple scenario. I can do it for you, if you would like, for this map (it is quite easy). That way when people play it the teams are automatically set.

And i if this map becomes a all-vs.-all map i see player 6 winning (because of that castle at the top left)

The_Gnat wrote:Nice! I would suggest that you make the different sides on the same team using a simple scenario. I can do it for you, if you would like, for this map (it is quite easy). That way when people play it the teams are automatically set.

That would be great!


And i if this map becomes a all-vs.-all map i see player 6 winning (because of that castle at the top left)

Well, that is what happened in the history of our world. Player 6 on this map was allied with Player 4 from the original map, after all!
Check out my maps!
http://forums.wesnoth.org/viewtopic.php ... 3&start=15
Top

Yeah no problem so who exactly would you like allied? Currently i have players 1,8 & 9 allied. Players 2,4 & 6 allied. And players 3,5 & 7 allied. Is this good? (also i can easily add gold settings and income and ect.)

Here is the scenario currently:

The_Gnat wrote:Yeah no problem so who exactly would you like allied? Currently i have players 1,8 & 9 allied. Players 2,4 & 6 allied. And players 3,5 & 7 allied. Is this good? (also i can easily add gold settings and income and ect.)

Here is the scenario currently:

Well, I had ideas for two more Agaia maps. I know! Enough already! But I think there's a place for these. One fleshes out the furthest north a little more, and the other explores the seas to the east. The former I will post here today, the latter I will save until the map editor is working for the Mac version of 1.13 branch.

With the old, familiar Orc nation in civil war, the nations of Agaia are safe from Orcish incursions, right? Not at all! Turns out, there are multiple Orc nations in the Polar regions!

I have updated eleven of my maps to take advantage of some of the new terrains available in 1.13 branch. These changes are purely aesthetic and do not effect gameplay, I just like the desert mountains and ruined desert villages.

I have also made a new map. This one begins to explore the seas to the east of the main continent. The screenshot is small, but the areas at the western edge are the eastern coast of the main continent. Everything else is new. I also added stretches of shallow water connecting the islands and the continent. I did this because years ago, when my siblings and I created this world, I wanted to explore the seas to the east, but never got the chance. 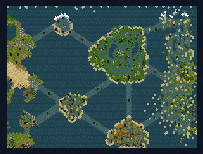 For those who are interested, I have been working on some interesting variations on the main Agaia map. I call it Agaia Redux. These changes significantly alter gameplay and add up to a whole new version. Stay tuned!
Check out my maps!
http://forums.wesnoth.org/viewtopic.php ... 3&start=15
Top

As promised last summer, here is an alternate version of the original Agaia map. The main differences are that I have decreased the number of villages and greatly increased the number of castles. A few minor geographical adjustments have also been made here and there. Translating this world from hard copy to an electronic format inevitably involved some compromises, and I wanted to see how things would turn out if I made some different choices here and there.

Along with it is a slightly updated version of my original post introducing the world of Agaia. In particular, I have updated some of the faction recommendations:

Player 1’s lands were once ruled by Player 2 and are currently ruled by Player 6. He is trying to gain his independence. He is seeking recognition from one of the major powers, and Player 5 seems to be sympathetic. Player 1 should have the culture of Early Medieval Russia. Nothing in Wesnoth quite approximates it, but the Marauders from the Imperial Era would probably do.

Player 2 is one of the major powers but was once the lone superpower. In those days, he ruled a vast empire encompassing most of the northern half of the map. He fell on hard times, suffered numerous invasions of Orcs and Undead, and lost three-fourths of his empire. But he survived and emerged intact. Now he is trying to regain his former might. The Lavinian Legion and the Dardo are the Wesnoth factions most like Player 2's nation. Part of why I was always enthusiastic about the Imperial Era is because my siblings and I already had a fantasy world with a Roman-type nation!

Player 3 is also one of the major powers. He rules lands that once belonged to Player 2. He is very concerned about Player 2’s ambitions and is trying to organize a coalition against him. He has traditionally been allied to Players 4 and 6, but politics may drive them apart. Player 3 could be Loyalists, since his nation was the most typically Medieval, or Knalgans, since he always had a strong alliance with the Dwarves, or even Celestials, since he had military-religious orders. The Ukians might also work. But to really be authentic, please make sure the king is a ranger or an archer.

Player 4 is one of the major powers. He is in a difficult situation. During the time of troubles, he allied with Players 3 and 6 for mutual defense against the hordes of Orcs and Undead. Together, they survived. However, before the troubles began, Player 4 was allied with Player 2. Whether he will side with Player 2 or Player 3 in the current conflict remains to be seen, especially since Player 6 may take the side of Player 2. The emperor does not want to break with either Player 3 or Player 6 especially since his one brother is king of Player 3, and his other brother serves Player 6. Player 4 also aims to recover some lost territory of his own, particularly in the West and Southwest, where the Hordes of Undead are such a serious threat that he has built a Great Wall in an effort to hold them off. Player 4 could be Loyalists, or he could be Kharos, since his nation had an Asian milieu, or even Rebels, since he always had Elvish allies.

Player 5 is the youngest of the major powers. His nation arose from the desert sands unexpectedly after he helped Player 6 defeat some Orcs and a Necromancer that were terrorizing the region. Like Players 1 and 3, he rules lands that were once under Player 2, and could probably be counted on to resist him. He is, however, pragmatic, and will side with his interests, wherever those may lie. Player 5 should be a desert-dwelling faction. The Dunefolk seem to work well, but most of them would do.

Player 6 is the last of the major powers. He also rules lands that once belonged to Player 2. However, his people are descended from colonists sent out by Player 2 in the days of his glory. During the time of troubles, this southern colony survived by electing it own emperor and allying with Players 3 and 4. Now that Player 2 is returning to power, Player 6 may split the old alliance and side with the motherland. However, politics in Player 6’s realm is volatile, and much depends on which faction gains the emperor’s ear, or emerges dominant from the latest civil war, as the case may be. Player 1’s rebellion only adds to the chaos. The best possible faction for Player 6 is the Refugees from the Mercenaries Era, now included in Ageless Era. If you don’t have Ageless Era, then Player 6 could be either Arendians or Kharos or the Ceresian League. But he has to have horse archers. He was always proud of his horse archers.

Player 7 is the Orcish Horde. He has been pushed back to the swamps and frozen tundra of the northwest by Players 3, 4, and 6, but still has strength, and is preparing his own attack.

Player 8 represents the inhabitants of the southern islands and the steppes. As a whole, they are not aligned with any of the major powers. Again, however, politics in this region is volatile, and much depends on which tribe or coalition is currently dominant. Some tribes sympathize with Player 3, some with Player 4, some with the Orcs and the Undead, and some just want to remain independent. Player 8 could be Aragwaithi or Darklanders or Marauders. Barbarians might also work.

Player 9 is the Hordes of Undead, along with their corrupt human allies. They dominate the southwest, and are a particular threat to Player 4, who has gone so far as to build a Great Wall in an effort to keep them out. But walls can be breached.

I could have included dozens of other tribes and minor powers, but we have to keep things within Wesnoth's limits!

And now some screenshots: 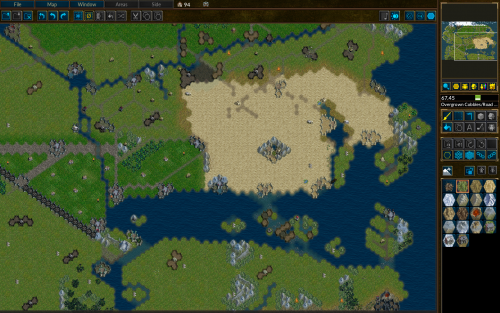 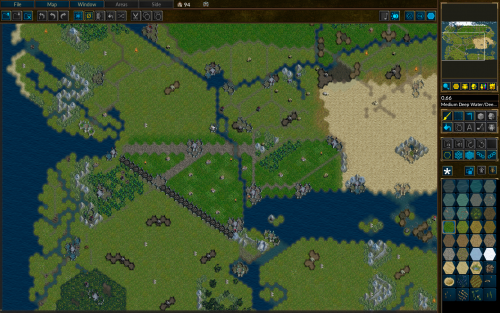 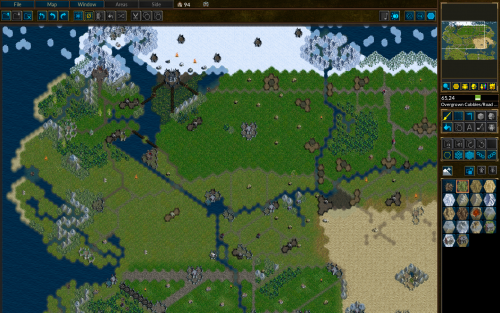 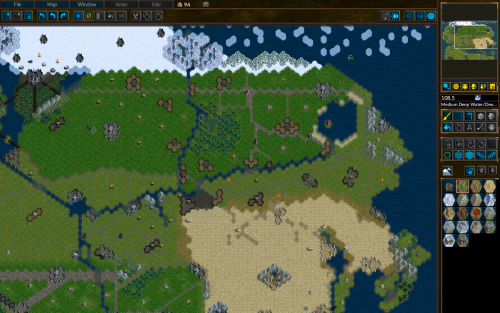 Thank you for your hard work over the years！

Thanks for the appreciation!

O.K. One more Agaia map, and then I think I'll call it quits. This is a further development along the lines of Agaia Redux. I've called it Agaia Ultima, for lack of a better term, but all three versions are good.

This version, however, is not backward compatible and can only be used with 1.15. 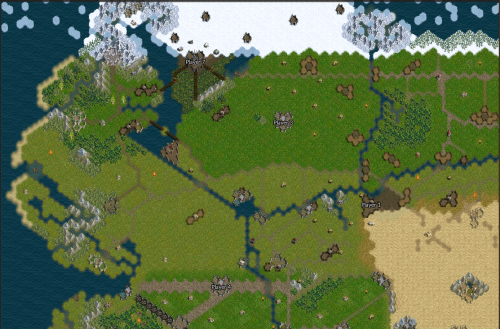 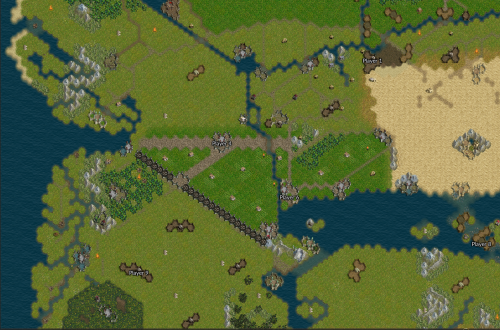 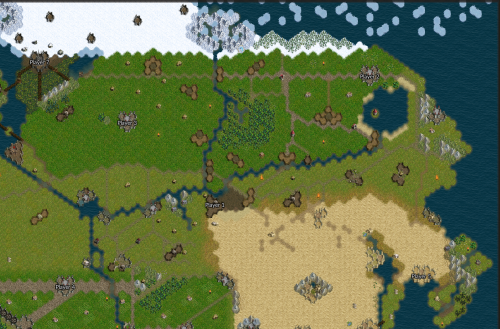 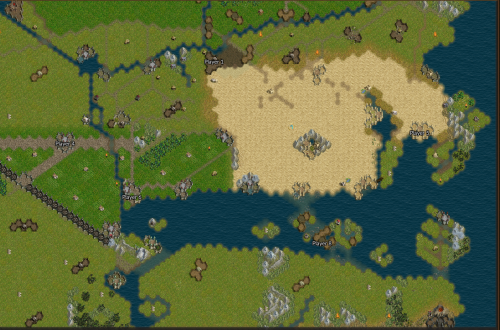 Well, actually, just one more. I had to do this one, strange though it is, for sentimental reasons. But now I'm really finished. 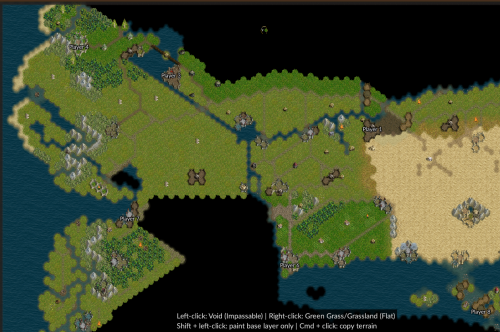 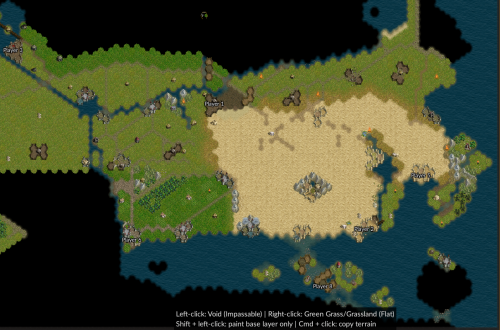 I should add a few pointers on this map:

2) Player 2 is the same as Player 5 on Agaia South Morph.

3)Player 3 is the same as Player 4 on Agaia North.