This is probably the last release for wesnoth 1.10. I have plans for a 1.12 version not too long from now, but I plan to make some significant changes first.

(I think it actually works fine in it's current version for 1.12, you can just drop the add-on folder to 1.12 in the meantime if you want, but I would like to make use of some of the new features in 1.12 to make no mirror era work better.)

The new release is available now for wesnoth 1.11! It will also be available when 1.12 is formally announced.

Main changes:
- Fixed a bug in the no mirror era which caused it to fail, thanks to Mint for reporting.
- After the rage in me subsided that omitting a single $ in WML can cause a non-obvious bug and no syntax errors reported... I resolved to rewrite the whole thing in lua to improve maintainability.
- Taking advantage of 1.11 / 1.12 features, the no mirror era is no longer an era, it is a multiplayer "modification". This is great because it can now be applied to any era, not just the default era. So we now get for free a "Default + Khalifate no mirror" and "Alternate Era no mirror" etc. etc.

hello,
how to add new maps in the RBY 2 vs 2.
there are new maps added by velensk in add-ons, and i want them to be in the list of rby explorer 2 vs 2.
thanks in advance.
Top

The map pools are all in the "campaigns" folder in the RBY add-on. This is the one that makes RBY Explorer:

For example if you want to add a new map, you can add a new line here like

And you have to increase the 6 at line 20 to a 7. You should also update the description strings in this file.

You also need to actually add the content of FOO to the RBY add-on if its a map that isn't already there. For this you go to the "scenarios" folder.
If you add new maps that are good and make a pull request on github, I will review it and maybe make a new official RBY release with your work so that everyone can enjoy it

In general adding new 1 v 1 maps to RBY is contentious and something to be done by consensus with the wesnoth ladder players basically. RBY 2 v 2 maps is not related to that, its just a spin-off that I made. Whatever 2 v 2 maps are known to be good or are "up and coming" can be there. Its best to have "stable" maps because if the map gets updated by the author you have to do some work to update in RBY also.

It might be nice to add Horus' map from the tournament also... (note to self)...

RBY seems terribly bugged for 1.12. I think that every ladder player can easily count some of bugs.

So firstly, the most important and - also - making the game unfair bug is the fact that you are able to recall your enemy's leader. It makes ladder games unfair if someone only check the list of veterans.

Secondly, game often crashes at the begining for p2 and p1 is informed that "p2 has disconnected".

Sometimes at the start vision switches to your opponent's side, then to your side so you know his leader and faction.

Sometimes OOS occur at the beginning of the game.

These are all of bugs I know so far. Please fix them, because RBY is the only random map picker available on 1.12 and the players have no choice if they want to choose the map randomly.

In general I don't check the forums every day and I don't get an email when my threads are posted in -- if you want to make sure I know about something, send me a PM.

Cackfiend pm'd me about this in November and I promised to look at it, but I've been busy -- sorry again. If someone wants to take over maintenance of RBY they would be welcome. Note that in 1.13 I added a feature so that the "random no mirror" stuff can be handled by the application itself which is simpler than doing it inside RBY, so going forward RBY will transition to being mainly a map pool I guess. Point is it might be simpler to maintain.

Anyways I plan to take a look at this over holiday break -- but I did test the 1.12 version myself when 1.12 was released, so, sorry that bugs got through.
Top

Note that using RBY era without the map pool is not supported, it will always lead to a broken replay (it was always that way), and in 1.12 it's not different but you might get worse side effects.
Top

It is very various. I'm just trying to reproduce the bugs and will send you the results.

Created the RBY Classic game with RBY No Mirror. Both sides are random. Game loaded for the host. Strangely his teamcolor is blue and he's side 2 (Shuffle sides disabled).
Game didn't load for the second player. Received OOS: 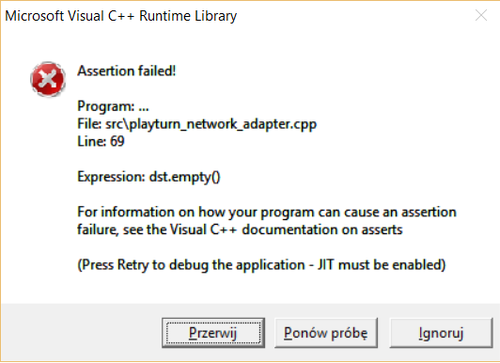 RBY Classic without RBY No Mirror. Both sides random.
Game loaded for both sides.Side 1 became visible for host for a while, then visibility switched to side 2. Both sides received the messages:

Host is again P2 blue.
I haven't found any more problems in this game. Players aren't even able to summon enemy's leader.

I think that these tests are enough for finding the circumstances of the bugs. I am just curious why the players aren't able to recall enemy's leader as it had been possible. Hope they will help you.
MY ART THREAD
Top
Post Reply
38 posts