Me and Mondop created a new Multiplayermap, called Treasure Islands.

It is a 2vs2 player map with the goal, to offer some funny tactics.

We just created the map, and wonder how ballanced and playable it is.

So i hope, you want to test it.

Please report critics here, so that we can improve the map.


(-the northern snow-mountains are unpassable)

####The Mappack-file contains 3 files: a screenshot and a *.cfg and a *.map file. The screenshot is not really important, the other files you should copy to:

and after that you can open the map as usual in a Multiplayer area. have fun and good luck 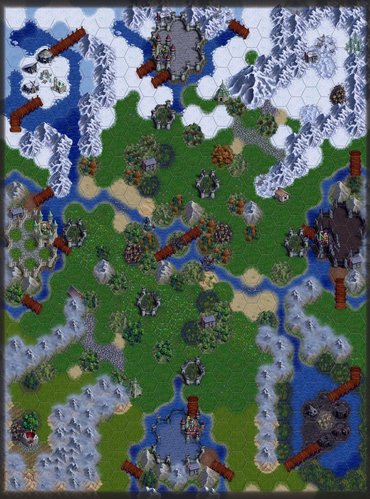 You could melt the screenshots together into 1 image to make it easier to understand.
Lamps and Megarace http://forums.wesnoth.org/viewtopic.php?f=13&t=30708
Top

Thanks to good critics of velensk (!),

we made some improvements. Some of them are just containing style, but more important, we improved the balance, which means the reachability of houses.

- replaced mountains with flat land and deep water with shallow one, so that we get more equality between the fractions
-deleted some mountains and hills to get less advantage for dwarfs
-brought more equality inside, so now every side can reach their houses with the same amount of steps (just the noth-eastern and south-western houses have different amount of steps, but the same for the both competing fractions)
- sadly we had to demolish the middle house, to deal with the 1st player advantage
-we added some swampruins and some sandy fields, to give more equal terrain-advantages
(-merged the screenshot

)
(-the northern snow-mountains are unpassable, just if you wonder, we did that because of a missing model, for unpassable-snow mountains)

so thanks a lot, for the critic until here, while i am stil open for new improvement proposals.

This layout looks very interesting. However if anyone wants(!) to be annoying they can hide behind various chokepoints with (a healer and) a few tough units for a very long time. Like take a bunch of ghosts and trolls into upper left corner. There are many 1vs1 chokepoints and nearly nothing can break through. Next round switch wounded trolls, repeat. On water use ghosts. Actually you could image scenario, where both allies hide into different corners. In this case they would even have potentially the same income as opponent team.

I suggest changing 1vs1 chokepoints into at least 2vs2 and reducing the number of villages behind it. Unless its intended to be chokepoint fight and rush for the corners (wich might actually be fun).
Lamps and Megarace http://forums.wesnoth.org/viewtopic.php?f=13&t=30708
Top

Elves get 70% defence on forest, and dwarves just 60% on hills. With mountains, they're equal, so why is there an abundance of forest, less hills, and much less mountains?
"What do you mean, "a dwarvish dragonguard with marksman is overpowered"?"

Reepurr wrote:Elves get 70% defence on forest, and dwarves just 60% on hills. With mountains, they're equal, so why is there an abundance of forest, less hills, and much less mountains?

Elves are less resilient, so it's less of a deal to have a lot of places for them to get great defence.