Hey.
Just finished some very minimal testing of this map with accelerated AIs..

Posting it here for any comments/criticism and for some friends to download for further testing.
I'd welcome any tips on how to improve this map, however, I'm aiming for a good blend of aesthetics, and FUNctionality

This IS the first map I've ever made, so.. Don't expect it to be fantastic

Scoast.zip
Updated version of Scoast.
(Updates based on feedback from a player test, where Player 2 seemed to lack in income)
(3 KiB) Downloaded 179 times

To make testing/reviewing easier: attached are a map screenshot at 25%, with the leaders red-circled (Scoast_25perc.jpg), and the map turned into a very simple scenario (Scoast_2.zip).

There are four sides. Is it meant as a FFA map or for team play (2vs2)? If the latter, what are the teams?
IMO, one problem with this map is that it's (way) too big. 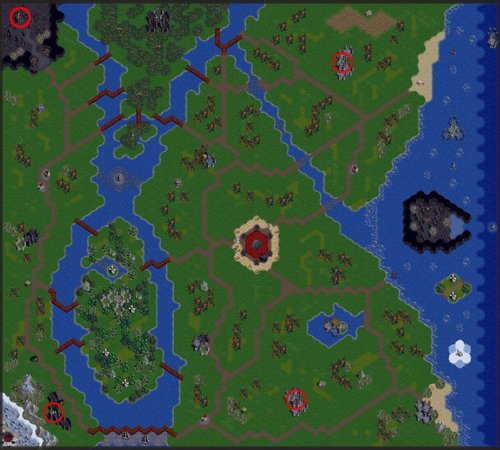 Thank you for the screenshot; I actually meant to upload one myself and it slipped my mind.

I made some edits/additions to my original post for clarification, & I've uploaded a slightly modified version based on feedback from some games with friends.

May I ask why the size is considered a problem?
Personally, I enjoy larger maps as they tend to provide longer games and provide a bit more room for tactical thinking.

Thank you for your comments; I hope others will provide such good feedback

Strategic thinking I suspect you mean.

Well aside from the fact that large maps take a much longer time to play, they are also very hard to balance. This map seems like it would run into many balancing problems when played by people who know what they're doing. It also falls victim to an effect I've noticed where the map is larger than the amount of interest it holds. There is a certain amount of drag to moving large hordes of units across plains with irrelevant features dotted onto it waiting to get to where your enemy is especially when this means that frequently you will encounter the enemy in regions that are not especially interesting.

There are a number of interesting fronts on this map however there is also very little guarantee that they are where the fighting will be. There are also features (like the cave in the ocean) that although cool do not make the map more interesting (either they don't do anything or a player can move his leader into there and draw the game just to cause ire because he cannot win like that). Aesthetically it doesn't seem to be anything special. Though some of the quirks are interesting but they don’t seem to have any unifying theme other than ‘stuff is here’

AI testing is utterly pointless for balance and on a map this size I suspect that it is useless for flow as well.

On the subject of balance: I suspect that a good drake player could clean up here as they are generally the most mobile (important on large maps) and there are many regions on this map where they can attack/retreat without much risk to themselves. On the other hand I suspect that loyalists would also be plenty good (especially since drakes usually play differently against loyalists than other factions). With certain combinations of factions certain sides will have immense income advantages that the other players cannot do much about (especially since the map has many regions that tactically favor certain factions over other making it strategically a bad idea to attack them much of the time. For example: If the player in the bottom right corner has flying units and the top right corner does not then the bottom right player is practically guaranteed mostly uncontested control of all the deeper ocean villages. The top right player could get some mermen and trudge them over to the ocean but it would take a long time to pay off and by the time it does SE player will have already gained enough of an advantage that he should have no trouble holding his assets. The same is true in reverse.

A note about flow: In order to move keeps you have to deny yourself recruits for a few turns. This is frequently worthwhile however some keeps are so far away or involve moving away from opponents you will need to worry about to deal with others. It is generally better to situate it so that if a player will need to occupy any keep doing so will not leave him vulnerable to the other players he is facing (example: SE player moving to sea castle to put some water units into the ocean exposes himself to SW player and NE players land units).

Income: Making it so that each side/player has good claim to exactly equal income as every other player is a major part of balancing a map. Even small differences in the number of villages make a huge difference in map balance. Now in a FFA this isn’t too much of a problem but it will make 2vs2’s sticky.

There is a guide stickied to the top which may help somewhat. Much of the more specific advice isn't aimed for this sort of map but then that is because there are some inherent problems with this kind of map.
"There are two kinds of old men in the world. The kind who didn't go to war and who say that they should have lived fast died young and left a handsome corpse and the old men who did go to war and who say that there is no such thing as a handsome corpse."
Top

If this is drifting too off-topic, reply in a PM.:

Captain_Wrathbow wrote:
If this is drifting too off-topic, reply in a PM.:

Over-simplified, the difference between tactical and strategic thinking, is respectively short term/how versus long term/what-why-whereto. See also: http://www.hainescentre.com/systems-thi ... tical.html So, bigger maps increase the importance of strategic thinking. The same applies to chess versus weiqi. (All this information is from the web; I use(d) the terms interchangeably and didn't know any better.)
Top

Norbert caught the main gist of it I'll try to expand.

In Wesnoth terms strategic thinking involves the overall flow of troops and what army composition is ideal for how you intend to play. Things like advances, retreats, feints, deciding to defend vs counter attacking or retreating, push timeing, general force composition, or the decision to horde gold, fall under strategic thinking.

Tactical thinking revolves around how to maximise your advantage in any given engagement. Troop positioning, which unit attacks which, formations, thoughts involving maximising special abilities, and such fall under tactical.

The phrase 'Some regions offer certain factions a significant tactical advantage over others making attacking these regions a poor strategic decision' should help you keep the difference in mind.

In general your skill in the strategic sense determines how much advantage you come into any tactical situation with and your tactical thinking and luck will determine what you make of it.

Ooohhh... that's interesting. Thanks for explaining.