read this page in this thread to see why he was banned http://forums.wesnoth.org/viewtopic.php ... 1&start=90
Top

Part of the reason for banning was 'Jinnaraka' was holding grudges against specific people and adding their nicknames to an in-add-on ban list.

e.g. my name causes the game to not work, unless I specifically remove the code from the WML.


I recall a specific game I was hosting in a SX game.
I made a public game on the server. Three other people joined to fill it up, perfect.
Wanting to only be entertained I just picked whatever unit I felt like and played in a very casual manner. Two of the people were obviously new players to SX and I didn't say anything, let them have some fun and likely die sooner than later.
Next, this fourth person starts telling us we suck and calling us names.
First instance I ignore, second instance I tell this person to stop, and third instance ban.

Immediately after this, my name shows up in the Jinnaraka SX add-on ban list, in the WML code.

Suspicious, certainly.
I continued to point out this 'ban list,' to which initially the account Jinnaraka denied any relation to and appeared intent on fixing it. Eventually the 'Jinnaraka' account admitted to adding the ban list on purpose and intended to 'hide it' such that it couldn't be found. (I was removing it quite easily from the code)

I don't know the other side of the story and I don't care. Life is better without such nonsense.
Top

At the moment I don't have much time for development, but I should return in about 1-2 weeks.

One more week, I don't have finished all I need yet.
Top

SXC / SXC Remake disables the "stones" special, but that special has been renamed "petrifies".


Edit: "stones"/"petrifies" is an special from core Wesnoth, not just the Ageless add-on.
Maybe reduce it to just slows, instead of removing it. The medusa's L2 unit has slows, and it turns in to petrifies at L3.

Currently updating the SurvivalXtreme Collection, and the SXC Pressure scenario. That's about a mermish necromancer, who's just found out that her Tentacles Of The Deep have been nerfed.
Top

Not a bad idea, I will include it in next version, if everything will go fine, it should be soon, i was experiencing some hardware problems lately, so i focused on solving them or at least reducing them (bad sectors -> backup + new drive -> restore from backup, fixing some weak keyboard keys - not perfect but should do at the moment, or i can use external keyboard if necessary, replacement ntb keyboard is not cheap) and i plan to build new linux pc so I hope that I will be successful and it will work without big issues.
Top

I've made two new SX maps and I'm wondering if you could add it to the SXC package? I've attached them - SX Mini and SX Fun

Plus few fixes to the SX BraveHeart map to make it more symetric and equal to all players (to much wall etc.).


The SX Mini is a small map where players start in two locations, but they join in the end.

SX Fun is different - you start with low gold (240 by default) and you have to kill boss-creeps to get the gold and upgrade to kill the final enemy. Recruited - moving creeps are limited in numbers (but they are fast).

Sorry for long time without update but I am too busy in real life so I have very little time to work on anything else, hopefully I will have some time next week for at least one more map to work on.
Edit: Not finished next map yet, still I have too much work...
Top

I got two SXC bugs.

2. After installing the SXCollectionRemake 0.3.4 addon I got this error message:

1. Probably problem with unit names in era. Edit savegame and erase whole <statistics> section and save it back, it should load the game without problem afterwards.

2. It could be the old windows bug is back in new BfW 1.10.7 version (so called "too many addons in Windows" or maybe in Windows 32-bit version only but I don't think so - i never reached the limit in Linux), anyway, i should have more time during winter to continue on the SXCollection addon (only the Remake though, because it's too hard to keep both the old and new versions at the same time and additionally the reason to use "Remake" is only to keep the old version with all maps on the same addons server).
I suggest to try older Wesnoth version (1.10.5 or 1.10.6) to check whether the problem is version dependent.
Also you can try to make separate configuration directory for testing purpose and run Wesnoth with the parameter "-config-dir path/to/the/testing/directory" (replace with real path) and install only SXCollectionRemake addon and suggested era (without the required era some maps will not work properly). Let me know whether you will have the same problem again or not.

Sorry for late answer but right now I don't have much time for the development.
Top

I would just like to say that the SXC add-ons are my FAVORITE. I think that they have the most replay value, particularly for solo play.
Top

btw: I think 'System' is wayyyyyyyyyyyyyy too difficult. Granted I'm a poor and unlucky player, but unlike any other map I just can't beat it on 'EXTREME'.

Anybody have a replay for inspiration?

As usually, I can't watch the replay.

Edit: I'm not too happy with SXCR 0.3: grossly increased prices and reduced choices.

Edit2: Regular leadership is nullified in SXC? Here I have a lvl2 Sorceress next to a lvl3 General with leadership but no bonus: 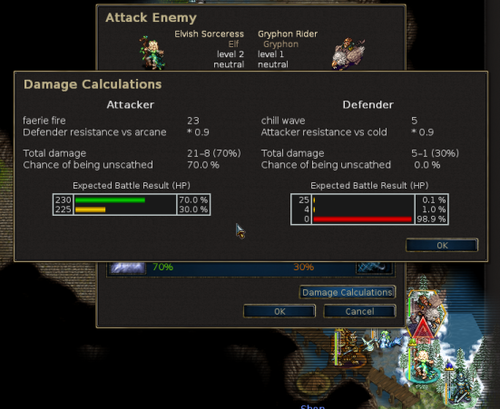 Sorry for late answer but i had a lot to do and had no time for SXC development. Normal leadership doesn't work for players in SX because it only works for same side (and players are not same side) and it would be too complicated to change it for lower level units because once you add something, it's maintained after you level up, even the original unit loses it on level up. It's very hard to check (especially for unknown or very complex eras) so the default specials/abilities are not changed until the unit gets it's maximum level.
About the shop prices - shop and game was unbalanced for at least 2 years and the price changes together with other changes help balance the game. Or do you think SX pack from Mabuse is easier and cheaper?
Anyway, there is new version of wesnoth, so next goal will be to make it fully working in version 1.12+ and that can take some time again. I can't promise anything but I will try to adapt the addon for new wesnoth version before Christmas.
Top

Sorry for the late answer myself.

Thanks for your explanations.


-stf- wrote:About the shop prices - shop and game was unbalanced for at least 2 years and the price changes together with other changes help balance the game. Or do you think SX pack from Mabuse is easier and cheaper?

Yes, I think prices for damage, HP, etc were cheaper and that made it easier. Granted I'm a poor player, but my old ways don't really seem to work. Maybe anyone have a few replays for inspiration?

Thanks -stf- for your work. All the best to you and I hope we will see a lot of brutal sx-action in 1.12!

Would it be possible to let the players choose a difficulty that affects the prices. Yes, I know they can choose starting gold, but this would be different.
If presented with the opportunity, I would take great pleasure in becoming a world ruler.
Top

Tom_Of_Wesnoth wrote:Would it be possible to let the players choose a difficulty that affects the prices. Yes, I know they can choose starting gold, but this would be different.

Prices are affected indirectly by the income every turn and from kills (easier difficulty = more income, basically you get more gold so you can buy more upgrades over time).
Also enemies are not so strong with lower difficulty.

Otherwise, I am now fighting with installing Wesnoth 1.12.xx (compiler refuses to link due to missing boost library even i have the required library installed) so once i will find the solution, I will try to adapt SXCollection for 1.12.xx as soon as possible according to my free time (not much free time at this moment).
Top
Post Reply
177 posts