Thanks I thought it was something like that...
I've now added realm mode to my 3 maps and remove drakes (until I redo it)

I'll try and fix up the utils so it uses the real method above for 7, 8 player instead of my 'hack'
Maintainer of Conquest (Original Gameplay), Conquest+, Conquest+ Space/Ranged, Chaoz Battle of the Wizards, Lazersquad (squad game), WesCraft (building MP game)
Top

the file is also 90 vilas (think it was just case of updating 60 > 90 in a few places) and I removed dwarfs cos making some mediaeval maps set in history :/


latest file attached for anyone who wants to see.

wtf_is_this wrote:Best conquest map?WTF?This map sux(how can 4 houses to be 7 gold bonus and 5 to be 8 bonus)and so much increased bonus.+U r a total noob after our last game(i was geting 100+income in 1 turn ugot 70 i got and more army but u said i lose this if i leave).Only good of the map is the Changed colours of evry region but EVRYTHING else sux.The map left 10 or more free vilages to u and only 1 to me in our game and i still won(see what unbalance is this),If u donttrust me ask Bersekerjaguar to confirm this(he observed a part of the game).

WTF, "f_u_c_k y_o_u" you said in our last game. How can you say that word? that is so rude, and you are a quitter and a loser, so you are banned to my map. It is not the best map yet, but I will make it the best. If you don't like it, good for me.
Legendary Thief (single player (Intermediated level, 20 scenarios) campaign; author)
Various Multiplayer scenarios modifier
Top 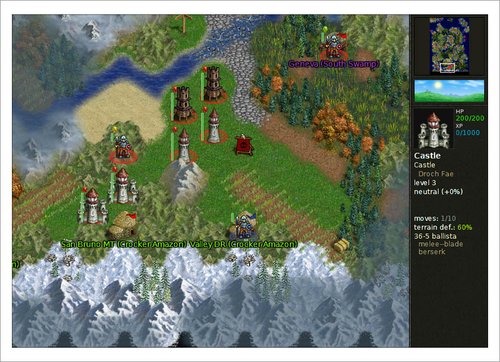 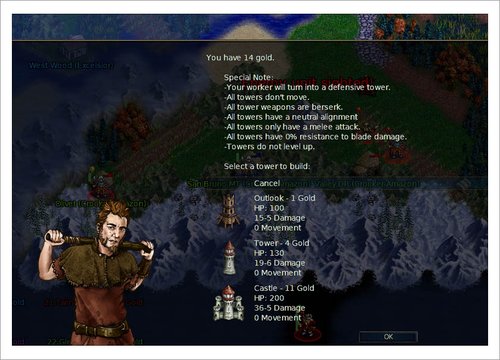 Re: The best conquest

Jinnaraka wrote:hi guys, I am making a best conquest map.

I think the map is interesting, at least it is different with those more distant villages.

ST, Thank you for helping me make it the best conquest map. you are a great helper and your name is in my map, but do you think Alexander the Great should have his name changed too? Too late I guess, since he is dead.
Legendary Thief (single player (Intermediated level, 20 scenarios) campaign; author)
Various Multiplayer scenarios modifier
Top

I think the towers are really neat although if you are making towers, I'd like to be able to be able to use the existing 'worker' unit, so they can build structures (and not disappear themselves) like towers, a barracks (like a villa which can recruit as normal), or perhaps also a blacksmith, so you can upgrade all your damage or armour (these are Warcraft ideas..!) You would need a big map with lots of open grassland to build stuff like towers, barracks etc. otherwise its more cluttered.

Another idea I have, which I might try v soon is a "village shop" menu on all vilas, allowing you to buy services for the unit, a kind of different "reinforce", so you could buy "spell of might +5" (+5 damage for the unit), "Bronze Armour" (defense +..) "Boots of speed" (more movement points), "Potion of health" (all HP restored), "Spell of kings" (adds leadership ability)... it would need care to decide how this works with reinforce, or even if it could replace reinforce.

I agree your map could do with a more descriptive title, why not just call it the actual map name, Conquest San Fransisco or whatever, because I was looking for it on the addon and couldn't find it (though its easily findable under 'conquest').
Maintainer of Conquest (Original Gameplay), Conquest+, Conquest+ Space/Ranged, Chaoz Battle of the Wizards, Lazersquad (squad game), WesCraft (building MP game)
Top

Gwledig your maps raent he most balanced but they are funy,and playable so many playerse like them.I m not sure that the the Features u think will make the game like conquest(i think it will be more prg like like SX).Some of the 'services' are ok but the full hp potion isnt realy needed(u can reinforce).+ resistance in conquest wil make it much unbalanced.So does the leadership.But other ideas are ok.Ah and baracks are big Lol for me(making ame REaly unbalnced),However we will see.Hope changes are for good:P.

Well I'm tempted to stick with basics and work up slowly

Like adding a new inherant faction which users don't have to download, using graphics from the core game, you can create new factions v easily such as as mutants, brigands, spell casters, undead etc.

So 1 or 2 new factions is defo on the cards imo, as it seems so easy to put in conquest.

Another similar thing is modifying some of the existing races so they have a couple more special abilities, such as nightstalk, ambush... Also adding a few new units such as a hero or lord unit to each faction, which has leadership and 1 other special power...

I might also do some of the 'village store' stuff like upgrade a unit weapon, armour, movement.. it would add a fantasy / RPG element, but could also switch it on/ off in the map itself.

I'm looking to make a new Faerie faction with icons from the core Conquest so noone needs ageless era to play. It will have woses, sprites, water creatures, a flyer and possibly no boats.

As a beginning, I added a new unit to all the main factions in conquest, called the Magus, it uses different icons for each faction and has abilities like heal and teleport.

I'm playtesting it now... not on addon server yet but soon. I also made magus work with reinforce.

Gwledig, I think its a great idea to add some new units, but it might be good for me to post my current plans in terms of new units for conquest, so that we don't end up using the same units.

Right now I'm planning on adding 5 new units to each race, although 3 of the units will only be used for large conquest maps, with 90+ villages in them.

I'd also create equivilants for other factions, so for example, elves would get a 25 gold Lord maybe, a slyph, and a 35 gold ancient wose, and orcs would get orcish ruler, and trolls as their tank units.

For standard sized conquest maps, I plan to add:
-A infantry and a light calvary for all races whose militia cost 1 gold, except for mermen.
Infantry would have 12-4 and 65 HP while light calvary would have 12-4 and 60HP
By making infantry slightly stronger, it encourages the player to use them, or I think they'd hardly ever be used.
-25 gold Shock Trooper for humans (70-4 with 400HP and 3MP)

I think the shock trooper should be added to conquest for the following reason:
In conquest it is very hard to defend, especially with the creation of the assassin unit. If you are threatened by a large army of knights, you would be pretty much screwed. If you make a general, the enemy makes an assassin and kills your general the next turn at a cost less than what you payed for to defend. If you make a knight or two, the enemy kills your knights with their knights and takes the village. This creates a situation where its very hard to defend your village by spending the same amount of gold as your opponent did, if they get to attack first. The tank units (for lack of a better name) should fix this problem at least partially.
By making a Shock Trooper, the enemy will have to sustain a significant loss of power to conquer a village it is defending, since there won't be a unit that can assassinate it. However, since it is so slow and has bad terrain defense, its very hard to attack with this unit, so making the unit also has some disadvantages. It means that the enemy could focus their gold on another region, knowing that you have a shock trooper there, but that it can't launch an offensive on them.
The equivalents for this unit for other races would be wose, hoptite, troll, and probably whatever the Amir levels into for the Kalifa. I'm not sure whether it'd be good to add this unit to the other races though, since they have other advantages, such as fliers.


Note: Stats for new units might change, but will stay roughly the same.
Top

righto I'll avoid faerie / elf type factions and any units which you may be using, so if we did merge any content there would be no overlap.

I'll probably try and do some kind of brigand or woodfolk side and see how far I get using existing but uncommon wesnoth units so it looks original and doesn't need downloading..
Maintainer of Conquest (Original Gameplay), Conquest+, Conquest+ Space/Ranged, Chaoz Battle of the Wizards, Lazersquad (squad game), WesCraft (building MP game)
Top

sorry to say it again but : how to fix my map? it still dont work and i didnt find the bug
someone who donwloaded my map corrected it ot maked it work?
Top
Post Reply
573 posts