Version 2.0 of Conquest is now on 1.8 add-on server ! It includes maps of Europe, Wesnoth and Jel'Wan.

Some modifications I made :
- as I said on the other topic, nonhuman village cannot recruit any human or boat, but they have a new 15 gold unit
- mermen have been nerfed up to make them more like the other races
- bonus system has been improved (your income is recalculated everytime you capture a village)
- boats cannot move in swamps (have you ever seen a boat sailing on a swamp ?)

Please report in this thread any bug you might find (from my tests, it seems to work properly but we can never be sure...).

Also, some new units will certainly be added on next versions, so you can discuss about it here.

N.B. : now that I uploaded this Conquest version on 1.8 server, I guess that makes me officially a maintainer of Conquest. However, Mabuse, with all you've already done for the add-on, if you wish, I can send you the pbl file so you can also be part of maintaining Conquest

sure, i could add more units for example if wanted

would be great to work together on this mod, i also have some maps in mind (crusades map for example)


as said i woud like to add these new units:

and perhaps use this as gfx for grand knight:


(then we use the old grand knight image for the 10 gold knight, which looks appropriate imo)
The best bet is your own, good Taste.
Top

ok, conquest fans, i made a new Map 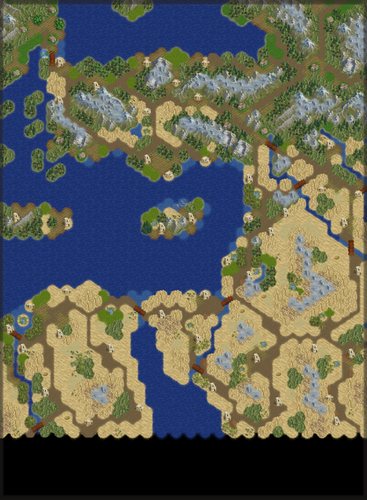 i also add the *.zip file for that Map and scenario files.
It features 5 new Units (Human only Map)

the graphic of the Galeon and Warship has been exchanged, simply due to the "old" Galeon was bigger, and so its the strongest Ship, the "old" Boat was reduced to a 3 Gold unit with the appriopriate stats.

Ships can (at least in this map) enter cities, at heir FULL movement cost. so you have to move your ship next to the city and it can enter it on their next turn. this was made to make ships able to heal, but also to simulate that ship may take the harbor of a town.

if you dont have the gfx you wont see the item in the recruit menu, and in game they wil appear as nrmal boats (with different stats though)

atm i use the new gfx as OVERLAYS, so its not optimal, but with this its compatible with all user (if you dont have the new gxf you see a boat instead)

i tried to get medieval citiy and region names form old crusade maps, but of course not everything may be exactly right


Notes:
Now you can argue that Cairo, Fatimite and Ascalon were in fact the Fatimite Kalifat, but i has to separety it on the map a bit, a kingdom of ascalon never existed, there was a city with that name though

Jerusalem is the entire coast including damascus and antiochis, tipolis etc.

that i separeted the abasid into abasid, mamluks and arabia is also just for gameplay purpose
(also some city names here are highly vague at best

in the end gameplay is what counts ...
... butif you have better names or ideas for improvement feel free to tell me.
Last edited by Mabuse on April 9th, 2010, 11:10 am, edited 3 times in total.
The best bet is your own, good Taste.
Top

@ alda: i just posted the map here for people who want to test it.

feel free to "install" it into your 2.0 upload.


also feel free to use the new units and ships in europe map (and/or wesnoth or any other map)
in other words: feel free to install the package completely
The best bet is your own, good Taste.
Top

Mabuse, I sent you a PM

And congrats on your new map ! It seems great.
Top

jerusalem now has 9 gold bonus, and i also changed byzantine terrain a bit and also set Dorylaneum 2 hexes farther from the nest region

ah, btw, i just see that alda send me the pbl file, so i will update the pack to 2.1 now

i also made the new units available for the Europe map.

the gfx of the boats are not optimal atm, for example TeamColoring is not working
(in dont know why though, but i ´m short of time at this moment)

all get the pack, by now there is a good palette of units:
(in the Europe and Crusader Map)


tell me about more Unit Ideas/concepts, i wil see what i can do.
The best bet is your own, good Taste.
Top

just a very slight balancing issue, initialy i thought its cool if the pikeman keeps his firststrike, but after all i think its not so good. would be a bit overpowered then.

the pikeman with its 15-5 attack is already practically a lot stronger than a usual 5 gold unit with 12-6. althugh 12-6 is 132 damage and 15-5 is75 and the difference is only 3 points, it makes a lot of difference when fighting a 90 HP for example - since the pikeman wont waste any damage becaseu he will reduce the cav right to 0.

the friststrike on the other side makes it also superior versus all other infantries like the elite infantry, which isnt reall yneeded.

so a slight nerf for the pikeman, which is an excellent (but slow) unit.


and remember guys, ships can enter cities if they have full movement

so they may heal now, or even take empty cities.
The best bet is your own, good Taste.
Top

Them have 10 more hp than the calvary (calvary haves 90 hp), and them with 15-5 can be a headquake for the enemy when you hold a pikeman in a village.

Pikeman is also a defensive unit, moving it to atack is really hard. The atacker should use a calvary than a pikeman, but ... Calvaryman no haves hope againist a pikeman in a village.

The Calvary is mainly an ofensive unit, A calvary can take for surprise a village defended by a Elite Infantry or by a Infantry and with only 2 calvary you can really take a village, so that is if you enemy dont notice of it just a time, he is in troubles.

I didnt tested the others new units, but them like simply awesome (Knights like to be a awesome unit, If I have gold I buy one of them

). But Lancer liked me more because 10 of gold is the half than 20 of gold, with a Lancer you can kill easly a pikeman in a village, so you dont need to pay more than 10 to destroy already a pikeman holding in a village.
Creator of: Deathmatch new in 1.12 server.
Developer of: Empires in 1.12 server.
Try My winning Orocia Guide
Top

I don't play much Conquest myself, but I've observed my fair share of matches and from what I've seen, you've created a sort of cult classic.
I mean it, it's like a secret society where everyone knows each other, certainly one of the game's most successful MP add-ons. So, nice work on that

yes, conquest is rally nice.
blueblaze did a great job inventing it.

btw, i also plan to improve wesnoth map and jel wan and add (the) new units to it.


i also plan to make a new defnsive unit, perhaps a unit which isnt able to move even

the castle would be able to attack, and would be quite strong for its gold cost, but unable to move. cost around 15 gold for example.

i only need to find a good way getting it and still be able to recruit.

however, nothing will happen unitl next monday


@IPS: yes pikeman is now balanced (i just deleted its firststrike (which i initially left in for flavor) - which seemed to be a bit over the top after all.

10 gold boat in Crusades have some problem. I recruited and tried to attack another unit from the town. It crashed the game
Top

lot has happenned since ive been on the forums 1.8 looking pretty good so is 2.0

1 bug found. you can find out a players bonus income by looking at alt s and checking their base income. i assume that is how u make the bonuses show in ur income idk if u can fix it or just get rid of the bonuses added to income u can see
Top

Mabuse wrote:btw, i also plan to improve wesnoth map and jel wan and add (the) new units to it.

Yeah, it should be done. I guess you already thought about this but new nonhuman units should also be added.


Lmao wrote: 1 bug found. you can find out a players bonus income by looking at alt s and checking their base income. i assume that is how u make the bonuses show in ur income idk if u can fix it or just get rid of the bonuses added to income u can see

Hmm, well seen. I admit I didn't thought about this when I changed the code. I'll try to find a way tto fix it.
Top
Post Reply
573 posts