Just a quick heads up on my progress; I've fixed a lot of the issues reported here (and some that weren't), and completed all of the must-do 1.9 conversion tasks (but not the custom inventory menu). I feel like I've done enough to justify releasing a version without the improved inventory menu now. However, due to a bug in the 1.9 series which breaks a bunch of existing code in Wesband (which I noticed when I was fixing the skeletal minion upgrade issues), I will be unable to provide a 1.9 version of Wesband before 1.9.14 (the bugfix has already been applied to trunk, but it didn't make it in time for 1.9.13), and many of the changes I've made break backwards compatibility with 1.8, so I can't release a new version for 1.8 either.
In short; no new version before 1.9.14 comes out, but probably a release very soon afterwards.
Top

That's good. I suppose once Wesband/Wesnoth 1.9.14 is out, that a serious localhost comparative-balance survey becomes viable.
Top

PS - if a mod is reading this, it would be nice to have the thread topic changed so people can more easily see that there is now a 1.9-compatible version of Wesband.
Top

Looks like we have some debugging before I can attempt my core campaign. 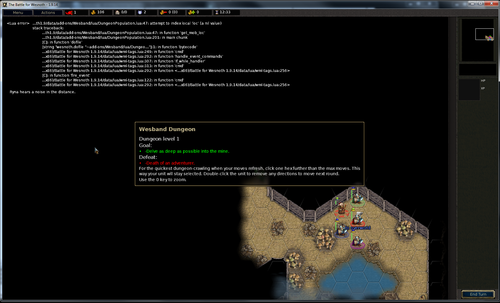 Hum, there seems to be a problem with the fog of war; once I end turn, fog covers the whole map. (As if I were playing a side with 0 units, or at least not my side.)
Savegame is attached in case you can reproduce the bug.
·Wesband version is the latest.
·This game was solo, the other "adventurers' " slots were "empty".
·This is dungeon level 3, I had no issues respecting to the previous scenarios.
·Not tried on the city map.
·For the 1st dungeon level, I had to run away (not "clearing the level") while on the second I managed to kill everyone.
·The issue 1st took place on the 1st turn of "dungeon level 3".
·Wesnoth's version is the latest (too).
·Game did not show any error.
·I use Ubuntu 11.04.

On a side note:
I've been playing up to level3, and no enemy dropped any loot (I have only seen gold, that I expect it was placed there during mob generation. Not even my henchmen, once dead, dropped their equipment. I do not know if this is a new feature, or just another bug.

Edit: I have also experienced a change in the mana cost of the healing spell; while on the "Use/Cast on self" menu it states the cost to be 2, the real cost is 2.25 mana points. I do not know whether this is intentional or not.

I'll look into the fog issue, but I don't know what might have caused it at the moment.
The item drop issue is troubling, that WML hasn't been changed since the 1.8.x versions, so it might be a result of a 1.8->1.9 WML change that I didn't catch.
The issue with the mana costs is a result of WML variable operations being converted from integer math to floating point. I should have that back to normal for all of the spell calculations in the next version. Let me know if you spot any suspicious non-integer values outside of the spellcasting stuff.

Edit - regarding the fog issue, did you do anything specific before ending the turn? I loaded the save game you supplied, and ending the turn (repeatedly) failed to reproduce the issue.

Edit - fixed the item dropping issue. Still not sure why it stopped working, exactly, but I converted the macros used for dropping items into a lua-based tag, and the new tag works.
Top

Edit - regarding the fog issue, did you do anything specific before ending the turn? I loaded the save game you supplied, and ending the turn (repeatedly) failed to reproduce the issue.

Err, that was my fault, I loaded directly as a single player game, from the main "menu"(or whatever) instead of loading as multiplayer.

Ok, it seems to be solved, I leave it here just in case.:
I think this output may give a tip about what's the drop item issue about. (I repeats once and again.)


Bad news again: (savegame attached)
It seems like if you kill the creature that detects you (A woodsman in the savefile.), and don't move from the spot, you'll get a full heal/rest even when there are enemies around, and even if you attack them.
Also, there are units that don't move even if they are on the "group/mob" that detects the player.(One hidden poacher in the savefile.)
In other words, there seems to be something broken with the [sighted] events.

Found the cause of the issue with resting after being spotted, and fixed that as well. I will probably try to get some more cleanup stuff (that I put off in order to get 0.8.0 out sooner) before I release the next version. Let me know if you find any other issues in the meantime, and thanks for the reports.
Top

I only tried this with piles of gold. Because of the "item dropping issue", I only found gold in the dungeon.
--Kernigh http://www.wesnoth.org/wiki/User:Kernigh
Top

Yeah, that's a problem with the Wesband help menu being out of date, I'm going to need to rewrite significant parts of it.
Top

I love this add-on so much!

Anyway, I don't quite know if this is welcome, but I figured that it's based off a rougelike, therefor it needs the Wizard of Yendor. So I wrote one.

Here it is. They don't have any particularly interresting abilities, (if you like it then I'll code some

) but their self-replicating-fireball seems mean enough. Anyway, hope you like it.

(for those who don't know, the Wizard is the main nasty in the old game NetHack.)

I'm liking this add-on a lot! After reading some of this thread it appears as if enemies are supposed to be dropping loot. I have cleared 6 floors so far and am yet to see anything dropped except gold. Did I misunderstand? Is gold the only drop at the moment?
Top

BadgerAttackSquad wrote:I'm liking this add-on a lot! After reading some of this thread it appears as if enemies are supposed to be dropping loot. I have cleared 6 floors so far and am yet to see anything dropped except gold. Did I misunderstand? Is gold the only drop at the moment?

Unfortunately, yes. This bug was introduced in the big-bang port from the 1.8.x version (which also has a few quirks, but the loot drop does work properly there).
Top

Tell me, please. Which version of Wesnoth do I need to play latest Wesband?
Top
Post Reply
937 posts