I'm glad that's over with. I just got done converting create_weapon and create_armor from WML events to Lua-based tags. After the changeover, items.cfg went from 3906 to 461 lines of WML, and item-utils.cfg went from 1183 to 367 lines.

It's nice to look back and be able to feel like you've accomplished something.
Top

I'm planning on putting a new version of Wesband up soon (probably sometime tomorrow after I do a little more testing myself). I feel I should warn you all that it may be more unstable than usual. I just got through converting unit construction from WML to Lua, and could use some extra eyes to catch intermittent problems (Lua is more finicky about some things than WML, so I've been running into bugs related to individual unit types which were silently ignored by the WML version but cause huge error messages in the Lua version; for example, the typo "icone=" instead of "icon=" that has probably been in Wesband since 0.4.0 if not earlier).

The big win is that, between this and the weapon/armor creation changeover I mentioned earlier, the quantity of recurring event code that goes into savefiles in Wesband has been reduced by something in excess of 13,000 lines of WML. That's actually enough to make a pretty noticeable dent in turn processing times (at least on my computer it is).

The downside is that the new code still chokes on some of the less common corner cases. So if you see any error messages, units with obviously wrong stats (there are some slight rounding differences in damage calculation for weapons that I don't feel are worth changing to match the old version more closely, but otherwise things should work out the same, missing abilities, or other anomalies in the new version let me know.

Oh, and the new version will also include some assorted bugfixes and an improved dungeon generator.

You could update the version number pretty quickly...

I'll check it out sometime in the next few days. So you changed the inventory stuff to LUA, I'll make sure to give it a good once over.
Top

The inventory management is still in WML (that will probably have to wait until after Wesband gets updated for BfW 1.9/1.10, since it's pretty much begging for a GUI2 custom menu and I don't want to have to rewrite the whole thing for a third time), but the generation of new weapons/armor is converted to Lua. There is a possibility that some of the inventory display calculations got broken by the unit construction conversion (I already fixed one situation where that ocurred).

The thing that really needs a workout is the unit construction code, I haven't gone through and tried all the combinations of races/equipment/skills (not really practical for one person to do so, even with debug mode) or generated all the different types of enemies.

Also, let me know if you generate any pockets of unreachable stuff on 40x60 or 60x40 dungeon levels. I didn't go through all the cross map flow masks exhaustively to make sure there was no chance of that (although I tried to prevent that sort of situation when I converted them to handle non-50x50 maps).

As for the version number, it feels kind of silly to re-upload the whole thing with identical files just so it displays 0.7.2 in the add-on server list, especially since 0.7.1 was never uploaded (or 0.6.2 and 0.7.0, for that matter).

Edit - Known Issues in 0.7.2:
moves lost/evade after armor do not display correctly in inventory management (fixed for 0.7.3)
Top

I must say that Wesband is freaking awesome!

I just got a problem, people can't stay in my game when I host. They are forced to leave when I start the scenario.
I suspect it's a problem with add-ons, which ones do you need?
(I don't have problems with normal games)

EDIT: umm... thunderstick tinker has no thunderstick at start? Also dark adept has 11-1 magic at start, wanted to make it not-so-powerful? yay you fixed this
Last edited by Colouredbox on June 26th, 2011, 7:52 am, edited 1 time in total.
Waiting for cheesedwarfs to be added to ageless.
Top

@ColouredBox: In answer to the first part of your post, the only add-on you need is Wesband. Make sure everyone in the game also has the same version of BfW and the same version of Wesband as you do, we've had problems with that before. If the issue persists, please let me know what error messages show up.

The things referenced in your edit are both bugs caused during the recent changes (the spell bug was actually affecting all spellcasters, not just dark adepts), thanks for reporting them. They will be fixed in the next version.
Top

And the next version (0.7.3) is up. This is a simple bugfix release, it just fixes the issues with spell attacks/damage, starting thunderstick, inventory view, and another with the cruelty skill.

I had just finished creating my 4 charcters: all 4 are Magical Initiates. Names: Alpha, Beta, Gamma, Delta. The first 2 have henchmen, renamed as "Alpha's mage" and "Beta's Mage".

I had just used Alpha to issue the "down to dungeon" command at the start of turn 2, and then the screen showed what looked like a stack trace. Screenshot attached. [EDIT] Oh, and then I get the "You are defeated!" message and the game is over. 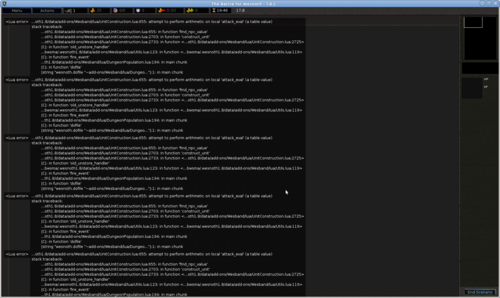 I definitely like the new inventory management system, especially now that I can control what armor/weapons my henchman use.

Unfortunately, I really don't use that function much. I use the "pick up stuff" functionality a lot more.


So while the new system has made a relatively rare function easier, it's made a very common function slower and has slowed down my gameplay.


Sorry if this sounds like a whine, but I figured that you guys should know. [Great, I lose a FanBoy point....

@Brian_A: Did you have "use map settings" turned on when that first error appeared?
My_Own_Minion: get rid of the scientist, i can take the blind guy

Golbeeze wrote:@Brian_A: Did you have "use map settings" turned on when that first error appeared?

I have no idea. Is it a startup option, or is it a menu option I can turn on and off? I can't find it anywhere in the Preferences or other menus.


If it's a startup option, should it be On or Off?
Top

Golbeeze wrote:@Brian_A: Did you have "use map settings" turned on when that first error appeared?

So I started a new game, and the "Use map settings" was enabled. I didn't touch any of the settings but just started the game.

I got most of the way through level 1, went back up to town, back down to level 1, and then cleared level 1.

On returning to town, the first scene had 5 error messages, all of them:

I'm expecting there to be no new weapons, but "Let's find out", eh?

That's really weird. If you've gone that far, you've obviously used [create_weapon] more than once by that point. I have no idea what would have caused that.
http://www.wesnoth.org/wiki/User:Ken_Oh
Think Wesnoth's RNG is unfair/biased/wrong? Click here.
Top

@Ken If it happens again, would the replay or safe files help you?

I don't tend to keep them, but I could if it would help.

[EDITs]disclaimer: I don't know the code (either the engine or the add-on)...

I thought that new weapons only got generated once a level was cleared? On the first return to the top (when dungeon level 1 wasn't cleared) I sold all the stuff I'd picked up, and there were no new things in this shop. It seems to me to be typical behavior.


So were you referring to the (probable) calls to create_weapon during the shop's initialization? I presume this would occur prior to my making initial character choices.

Would the screen be initialized to take the error messages? Or - what if the equivalent of a crazy pointer had whacked a table or index value?

So ... I'll start keeping both save files and replays, and perhaps one or the other will show something useful...
[end EDIt]
Top
Post Reply
937 posts