Bob's RPG Era is now available on the add-ons server for Wesnoth 1.14!

You'll also find four of my RPG scenarios: Fall of Trent, Labyrinth of Champions, Into the Underworld and The Kraken. Not much has changed in the scenarios, but the era has had a big update since the last version.

You can see the full list of changes here...
Spoiler:
Changes in 1.7
- Created an achievements system
- Custom Options now lets players turn on/off defects, stances, criticals, achievements and competitive mode
- Renamed the criticals to make them less sound nasty: clobbered, dazed, hobbled, concussed
- Balanced character point cost for abilities and scaled cost of advancing in a class
- Fixed darkens and knockback
- The right-hand panel now shows an icon and tooltip for stances (next to the poison/slow icons)
- Gave Herbalism more options and buffed it up a bit
- Vagabonds get backjab for free and a new 'Experienced' weapon special: Disengage
- Vagabond's surprise ability only triggers on ambush now
- Added two new general items: spyglass and waypoint
- Improved inventory and crafting menus
- Extensive rewrite of much of the weapon/armour and improve character code
- Fixed the Elf Tracker animations
- Conjured units no longer drop items when they die
- Updated to the new Rogue animations
- Added info for stances to the 'improve character' menu
- Fixed a rider bug spotted by fullcircle
However, the two main changes in 1.7 are achievements and custom options.

- Your character can unlock achievements in the game if they perform particular feats. You can earn character points by unlocking the achievements before other players. These range from 'Artful Dodger' (dodge every strike from three attackers in a row) to 'Collector Maniac' (pick up 20 items from the ground). See the screenshot below for full details. The achievements are accessible in-game through the Character Sheet. 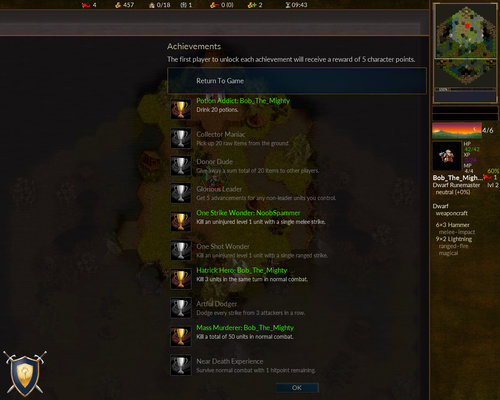 I'm not usually a fan of achievements in games, but I thought it would be fun to have another way of earning character points.


- The era is now modular so players can decide which features they want to use. If you click on 'custom options' in the game set-up screen you can can tick or untick boxes to enable/disable various features like stances, critical hits, defects and achievements. You can also enable 'Competitive Mode' which is intended for play on standard maps or survivals. See the screenshot for a better idea of where to find these options. 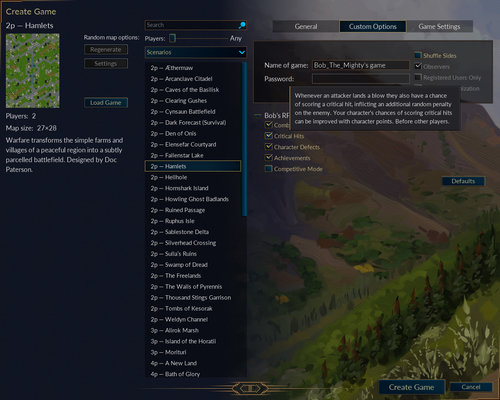 I imagine many players might miss this tab entirely. Others might find it useful, especially if they still have beef with the defects.


There has also been numerous fixes, buffs and tweaks. Some bugs I encountered in 1.13 seem to have vanished, but I wouldn't be surprised if 1.14 has snuck a couple more in. Please let me know if come across anything weird.

I've noticed playing on 1.14 that units seem very jerky during their movement animation when they reveal shroud. Obviously the RPG maps have lots of it. I'm not sure if it's my slowish computer that's producing the effect, or just the latest Wesnoth build. I'd be interested to know if others notice it too.

I've also been experiencing a bit of a lag at the start of turns, despite having streamlined much of the code. It can be alleviated by using the 'nosaves' command, but take care to make manual saves - or maybe just think of it as Ironman mode.

Yes yes yes! Finally anther one of my favorite add-ons has been added to 1.14.

With some very welcome improvements too! I like that Herbalism has been buffed, and Conjure has been nerfed. I very much look forward to playing full RPG games (and Competetive! XD)

So reports:
1. Smite can be fully recharged and malus TOD removed by changing stances back to normal stance.

- The notifications for actions (i.e. item giving, finding) disappears too fast, a few more delay perhaps?
- Inventory items have indications on which class can use them
- Rider and Tamer class be combined to make them useful (give rider to other factions too?), allows option to ride some tamed animals
- Trapper be buffed by having Area of Effect traps / triggers. Would also make it more unique as a class
- Weaponscraft allow for inventory crafting of wearable items? Or pehaps have that as a different class.
- Conjured / Tamed creatures transfer 50% xp to their master?

Thanks once again Bob

YES! It's finally here! Thanks Bob!

And yes, I've also noticed the laggy unit movement animation too. I'm sure it isn't my PC because it's more than powerful enough.
Turning off minimap features fixed it for me.

EDIT: Some of my thoughts on the defects:

1. 'Diseased' seems way too terrible of a defect, 15% is too high considering turns can easily reach go above 200 in the RPG maps, that is a lot of damage you're going to take throughout the game, if not outright death when it happens at the worst time possible. My suggestion would be lowering the chance to 5%.

2. 'Stupid' still seems to be more worse than Naïve to me. Naive is just a penalty at the beginning, Stupid is a penalty throughout the entire game.

3. Gambler gives you -100 gold, that's too harsh. You're basically denied any shopping at all. Why not -10 or just 0 gold? Gambler could be the money equivalent to Naïve.

4. Rider seems a bit too good. The only reason you'd ever want to dismount is if you're facing enemies with pierce attacks, or fighting on mountains/forests. I'd like more incentive to dismount to fight. Maybe make it so on horseback you do 1- less ranged damage? Lore wise it's because on horseback it's harder to aim a bow than on foot, for example.

Overall I'd like a more balanced defect list. As it is now, most pick Naïve as it's the least damaging of them all, or Selfish if playing solo.
Top


Computer_Player wrote: ↑July 8th, 2018, 2:01 am1. Smite can be fully recharged and malus TOD removed by changing stances back to normal stance.

Thanks for reporting this. I've fixed both of these issues now. If you spot anything else, let me know.

yamcha, thanks for the feedback. I've now set diseased to 5%, stupid to 10% and made gambler start with only -30 gold.I'm welcome to any other ideas at balancing the defects. 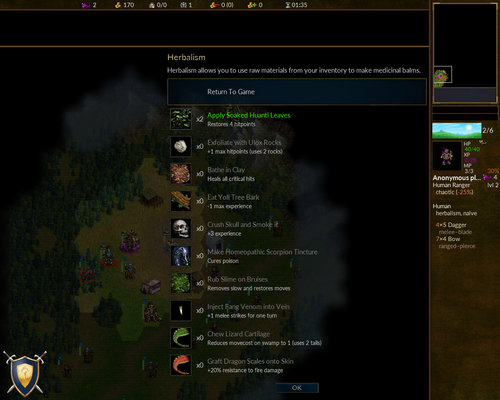 changing into a stance removes poisoning- the stance icon overwrites poison icon next to character portrait and poisoning is gone.

effect of mind potion is cancelled by someone going into run stance, even if it's a different character that does it. if you took more than one mind potion, the effect can also disappear one -3 bonus per turn (could be by design, idk)

run stance very erratic, can enter it in one turn, your mp max goes up and the icon is there, but next turn you still have the icon but mp back to normal. Almost anything seems to break your run, including gaining a mp through skill gain or icon equip, using all mp while running, being on crappy terrain, not having mp left on the turn you assumed run, someone else going into run, etc,etc

Believe I have narrowed down the Run Stance bug to 'if one character leaves run stance all characters are returned to normal movement points, but with run penalties still applied and icons/labels still displayed'. Poison removed by stance change- sometimes yes, sometimes no.

2. Changing stance seems to revert the xp to the value from before wisdom or xp potions.

Just a display bug but it makes a major difference to the inventory's appearance.

The parameter being passed to BOBS_DISPLAY-ARMOUR (OK, you know what I mean :) macro is capitalized (BODY FEET HEAD HANDS LEGS) and so the pics are not being found and displayed since the dir is lowercase. Maybe on Windows this doesn't matter. Sure it doesn't under DOS but I digress.
When I repaired my savefile I was amazed to find over a thousand instances... whew. I love mass search and replace. It bloody well choked my fast laptop replacing them... hehe. Looks beyootiful now.
--
Any typos are the fault of my laptop keyboard!
Lonely Era Merry Christmas Campaign Red MP Maps
Top
Post Reply
190 posts