I remember playing velensk's tower defense map in 1.12, however many errors appeared when i uploaded to 1.14, i am trying to fix these atm, while doing so , i created my own addon named "tower defense maps", it currently have only one map, map created by IPS, coded by me.

You basicly build towers/units (that can't move) to defend against moving mobs/waves (that can not attack) trying to reach central tower.

If you liked the idea and wanted to post your own map of tower defense, i can code it. 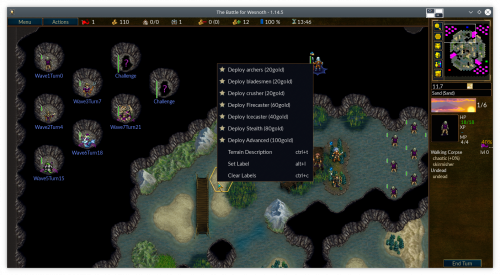 I was working on a port of this also.

The Tower Defense paradigm doesn't work very well in this engine unless you allow towers to attack every tile between a moveto. That was one of the things which I was doing.
Otherwise, you would want ranged attacks on the towers.
I suppose you could design a chequerboard–ish map. Players would need to place towers all over the map so as to decently intercept the creepers.

TDs are also very tedious in a turn–based engine. You want small maps and few movepoints per creeper — like 1 or 2 each. The speedy ones can have 3 or 4.
Top

The creepers would buzz past my towers, and then I recognized that there was nothing to enable my towers to attack unless an enemy ended its move adjacent to the tower. Not what I was expecting from my experiences with other tower–defenses.

Velensk's map also seemed too large. Good thing that the hitpoints of the central HQ were few enough to shorten the time watching the enemy approach until an impending defeat.
(It helps to disable drawing the moves of computer–controlled opponents.)

Initially, I repaired a few glitches. I then began revising the concept, but lost interest among my many other concerns.

I discovered an addon by Eagle 11 called Ranged Attacks Mod (simplified), maybe if tweaked, could be used in this map. However, i may do this later not now.
Ports: Velensk's tower defense, dov's deep shrine, Scrolling survival, Scrolling survival Co-op, Temples of the nagas.
Addons: Tower defense maps , some ANL scenarios like: ANL 3p "A New Land" survival type, and ANL Co-operative map for 2p
Top

Maybe wasn't what you were expecting but that was working as designed. The reason it was so large was because you needed to build defenses that covered amounts of space to catch the creeps. Making the towers ranged without changing anything else would almost certainly make it too easy.

For what it's worth though, that project was mostly something to fill in time between classes at school. If someone wants to take the time to take a proper stab at designing a tower defense designed from the ground up with the idea that towers are ranged that could be pretty cool.
"There are two kinds of old men in the world. The kind who didn't go to war and who say that they should have lived fast died young and left a handsome corpse and the old men who did go to war and who say that there is no such thing as a handsome corpse."
Top

Don't worry about it. If I did want to take it back over for some reason, I'd probably be wanting to do a different take on the idea. Though even if I redid it, I'd probably keep the idea of most towers not being ranged.

I was mostly posting to point out that the design of not making towers ranged was deliberate and I'd further comment that it's quite possible to beat the tower defense as designed. It is substantially easier to beat 4-player as a result of the quirks of the upgrade mechanics (which are one of the mechanics I'd probably do differently if I made another).
"There are two kinds of old men in the world. The kind who didn't go to war and who say that they should have lived fast died young and left a handsome corpse and the old men who did go to war and who say that there is no such thing as a handsome corpse."
Top

A-ha! I never thought of that

If it'd been named something like Barricades or Barricade Defense or Defense With Barricades Which Attack Too, then I'd probably not've made a fool o' meeself.

Well, I'm glad that I didn't continue making any changes to it, then. Doubtless it will need overhauled to pick up for deprecated features the mainline devs are dropping in 15, but the revision I posted in February should work for 12. I cannot remember now if I tested it or not . . .
Hay207, I haven't looked at any of your Tower Defenses. I cannot remember now if you were making your own or if you took the Velensk one and began working from there. If it changes the same bugs that I fixed, then everyone can forget viewtopic.php?f=15&t=49311&p=648823.

I haven't played this game for a long time now.

As to my comment that the map was too big: I think that the turn-based scheme of Wesnoth is a major obstacle to making the Tower Defense concept workable. The problem is not exactly with the size of the map, of course, but with the quantity of mobs on the map during any given turn: a large map facilitates a large army of mobs. Disabling the animation of AI moves helps, but needing to wait while the AI moves all its mobs is rather dull in a Wesnoth Tower Defense.
If I had known that it was a deliberate design decision to include no AOE or ranged attacks, rather than thinking the add–on was unfinished, I'd have been more clear about that. Oops.

More importantly, I don't have any suggestions to offer in regards to quickening the pace

The only thing I can offer is this, in summary: yes, in many other Tower Defense games, the mobs do move rather slowly, especially in early waves. The difference is that you can often do something while the mobs are moving. In the Wesnoth engine, you need to wait for your turn.
Top

A large part of the design was based on various WC III tower defense. The upgrade system was taken from the way elemental towers in Blizzards Tower Defense worked but the idea that you'd build numerous low range towers into extensive mazes as your primary means of defense was taken from a set of tower defenses where you could choose which faction of 'towers' you played. One of these was called the military and had quality of most of their towers being melee ranged but as they were cheaper than the other factions and had a lot of stuns you could build large mazes and keep the enemy under fire for far longer. This seemed a natural fit for Wesnoth to me.

Funnily enough there are AoE towers and even a ranged attack. Those capabilities are specific to Flamecasters and Blaster towers respectively. I'd say that overall those towers are the least useful in the game but for blaster towers at least the choice to keep that capability somewhat niche was intentional.

As for the speed of play, I'm not sure what machine you're running on but when I turn on the 'skip AI turns', it normally takes only a few seconds for all 5 AI turns to finish
"There are two kinds of old men in the world. The kind who didn't go to war and who say that they should have lived fast died young and left a handsome corpse and the old men who did go to war and who say that there is no such thing as a handsome corpse."
Top

Just started playing this. First try I fell into same trap thinking towers had ZOC's. Then I saw that you basically build a labyrinth gauntlet with cheap towers to wear down and kill the attackers before they reach the goal. Took a while too to realize that ford terrain was meant to be the tunnel for the attackers and that I could build towers on shallow water! <shock> Also that the expensive towers I built first were a mistake. Game 2 is going much better although I'll play out #1 to see how far I do get and whether I can rescue it.

Anyways my real purpose was to ask if something is a bug or feature. When attackers are killed they usually give gold but I noticed a few did not. I checked the error log (and found plenty, none critical though I fixed them to remove the spam) and saw nothing gold related. I think there might be a pattern I noticed. Do killed units only give gold when killed on a ford? Sort of makes sense since you want to fill all the rest with towers...

Oh and I should mention this is actually quite a lot of fun to play.
--
Any typos are the fault of my laptop keyboard!
Lonely Era Merry Christmas Campaign Red MP Maps
Top

hay207 wrote: ↑May 16th, 2021, 9:52 am Yes, killed units on any terrain are supposed to give you gold, you can calculate gold recieved by numerating killed units, i think each killed unit gives you 4gold, Have fun.

I haven't checked though whether it's a display bug (floating gold numbers appear usually) or gold is not being given. Will have to investigate further.
--
Any typos are the fault of my laptop keyboard!
Lonely Era Merry Christmas Campaign Red MP Maps
Top
Post Reply
13 posts • Page 1 of 1