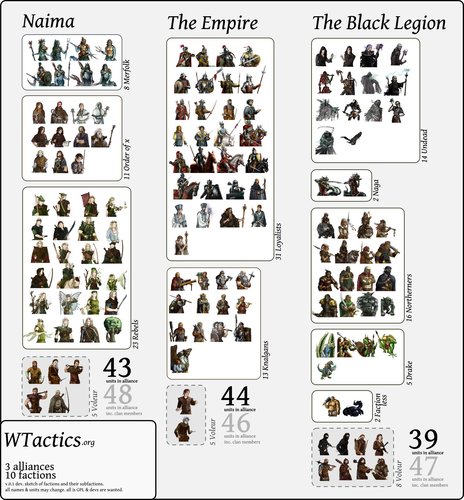 I'd like to ask everyone for help with a) creating (which units should be in which factin?) and b) naming both the alliances and their subfactions for WTactics.

If you'd be interested in helping you must consider the following in order to contribute in a constructive way:
Have questions or constructive thoughts? Share.
php? code the ladder. | WTactics - Wesnoth CCG
Top

Hmm, well that's a big change here. Not that I mind; many single player campaigns blurr the unit lines a bit like you have, but I'm not sure about limiting the game to only 3 factions…

I'm thinking of separating each "race" or "sub-race/faction" as it's own entity with a lits of what other entities they can or can't ally themselves with and let people build their faction from that. This will allow the creation of new and unique "factions" and still allow Wesnoth purists the possibility of building their favorite Wesnoth faction as-is.

hence the post in here asking for help. The way the 3 alliances are used is really a question about what cards can be played or not.

In WT a "Black Legion" (alliance) Event-card would require that at least one creature from any of the Black Alliance factions is in play under your control in order for you (the player) to be able to play the Event card.

By using this system we can skip out on currency resource system (i.e. Mana in MTG) and still offer the players great possibility to build any deck they want while at the same time having to take into account that a multi-allianced deck and multi factioned is, if it's too multi, probably harder to play than a mono or dual-allianced.

So, in a way. Alliances are just a "compatibility" list of what factions would play nicely together, in one way, just like you suggested. We could of course abolish the concept of alliances and only have "free" factions like you suggest, but, then we'd maybe have a problem with some being very small, having only a few units in them.

I'm thinking of separating each "race" or "sub-race/faction" as it's own entity with a lits of what other entities they can or can't ally themselves with and let people build their faction from that. This will allow the creation of new and unique "factions" and still allow Wesnoth purists the possibility of building their favorite Wesnoth faction as-is.

Elves and Adepts is a good example of how different the groups would be in size, or Elves and Drakes for that matter. One would be very limited, while the other is already one of the largest in the game.

Where would the list of possible buddy-factions be written down? Is it a card that the players must carry around if they don't memorize all legal combos? And exactly how would that list look like? And in what way doesn't expressing such a list as alliances cover the same thing? I mean, how does the list differ from the alliance concept?

As I have it now the alliance a card belongs to is expressed by the name field colours and border colours. In the case with all units belonging to the Naima alliance (elves, merfolk etc) that would be green. By just looking at the card you'd know what alliance it is. By reading it's cardtyp and/or viewing the picture you'd understand what faction it was.

Maybe I missunderstood you? Please explain your thought furhther and give a "real" example.

I was thinking mostly of how Chainmail addressed the problem with the alignments system. For example, if you wanted to play a Chaotc Evil army, you would have access to Chaotic Evil, Neutral Evil, or Chaotic Neutral troops. I was thinking a bit along the same lines, but probably using ideologies for Wesnoth rather than alignment…

For example, while I don't have any problems seeing Northerners or Saurians aligning themselves with undead, I have trouble wrapping my head with the idea of the noble Drakes doing the same…

This could easily be done by adding some sort of symbol on the cards (a simplified version of what Chainmail did for the alignments). So that way we could see the easily aligning themselves with the rebels or the loyalists and the opportunistic outlaws being able to ally themselves with anyone… 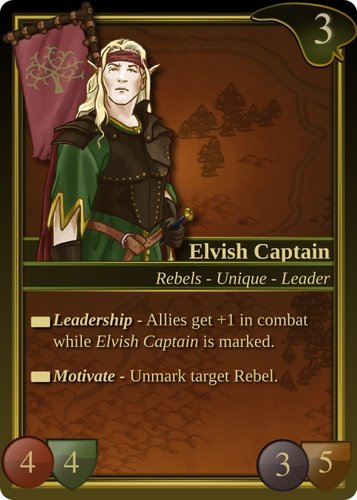 This could easily be done by adding some sort of symbol on the cards (a simplified version of what Chainmail did for the alignments).

Do you mean something along the line with the above? (Sorry for asking something that must surely sound stupid by now, but I'm not familiar with how/what chainmail did, but would love a url/png of it.)

I was redoing the template as you were writing and currently have a version of it that looks like the above. Now, by looking in the right corner at the leaf (yes, it's a leaf believe it or not

) the player can see the following things:
From what I figure, you have an idea about which factions a player is allowed to put into his deck/play with. Problem with that notion is that it would severely limit deck building / possible combos of cards and also replayability of the game. It is so because we have around 120 creatures, in total. The more predetermined relations between the factions we enforce with rules the less options the player has when creating his/her deck.

There are two main issues in this discussion:

1. Storyline one: Your reaction to the drakes siding with the undead is a good example of that, I think. You can't understand why the drakes would be in the same alliance as undead, because maybe it's unthinkable in current Wesnothian lore and/or wherever the default era in BfW is happening. But, consider the problem: It's superficial - there could be a zillion reasons fantasised in our heads to why and under what circumstances any faction would co-work in teh future or past with any one of their current enemies. The purpose of the game is not to support the existing lore - it's the other way around - lore exists to support the game as a whole. This does of course leave some question marks if one happens to be well versed in Wesnoth universe, but, can they really not be explained? I think they can.
Spoiler:
I.e. drakes don't want to side with undead but are forced out of self-preseravtion and what not reasons, and they believe they will break the pact with them once they grow stronger. This can even happen in the game - once we have enough drake/saurian artwork there could be some restructuring in the alliances if needed, all explained with nice fairytales about how when and why. It's all just about creativity, as long as one doesn't create a game to re-play the lore that already exists.
2. Game play balance: I don't know from which CCG:s you have experience, but in most of them there are design mechanisms in place to insure that a player can't just take the best cards in the whole game, combine them in one deck, and always win with that deck. The single most causal things to maintain balance in a CCG would probably be a) economical system - income/costs and b) teams/factions/alliances/subfactions all having different skills and weaknesses. Often in a CCG it's a bad idea to mix every faction in the game in one deck. The price you would normally pay in a CCG when doing that is making the deck very complicated or hard to play and put in motion, but that's a good thing because such a deck, when working and properly composed and started up, does wonders since it can access a lot of skills from every faction.

In WTactics I think it will be best to not have "hard coded" caps on what cards can and can't be in a deck (due to small cardpool of 120 units) . I think it's better to use an indirect and subtle approach but still allow the player to build any deck he/she wants with every faction in it if he/she so desires. The drawback for a player that does exactly that, and here is where balancing comes into play, is that it will be harder for that player to play the Event cards etc since almost all such cards are directly linked to either specific faction(s) and/or specific alliance(s). (In for example MtG there are no such limits because they utilize a coloured economic ("mana") system that does this very same balancing for them. WT will however not use coloured economy.)

With my proposal you don't have to play both drakes and undead in the same deck, even if they are placed in the same faction. It would be up to you and your opponent to decide what the restrictions to deck building were, even if I'd recommend you both to use none more than your creativity. At the same time, I admit it would be cool to play games that were pure alliance vs alliance, but then again - my suggestion doesn't hinder that either.

Edit: Please give me a concrete example by drawing up the relations between the factions. Just make sure you do it visually and by only using the units in the faction picture I posted. I'd love seeing your version of how it could be made, but that can't happen until somebody makes it real, and since I don't really see how it can happen in a way where card count is kept high in all alliances without mixing things up a little, I can't create it myself either.