Dun dun dun! We're closing in on 1.14! This update is purely a bugfix release; we've squashed a whole bunch from the serious to the pesky. We don't anticipate another release candidate before 1.14 proper, so be sure to report any issues to find right now!

Again, the 1.14 add-on server is up and running, so go ahead and upload your creations!

Read on for more details about the most notable fixes and additions in this release:

regarding the font scaling: Its maybe an better idea to create an wide-screen version of the UI for larger screens, that can be selected by the user in settings.
Remember, "Nothing flies like a Filburd!"
Top

I don't think we can easily do that with the time we have.
Creator of Shadows of Deception (for 1.12) and co-creator of the Era of Chaos (for 1.12/1.13).
SurvivalXtreme rocks!!!
What happens when you get scared half to death...twice?
Top

I don't know if this is the correct place to post this but I noticed that if un-named abilities are used they are still seen seperated with a comma in the unit description.

For example if my ability "Immune to slow" has no name: name="" a comma is seen in the unit description which looks funny.

Not a big deal though.
Creator of: The Reign of The Lords Era,The Gnats Franken Dungeon
Co-designer of the (not-wesnoth) space combat video game Planet Bounce.
Top

What if it has no name attribute at all, rather than name=""? The engine can distinguish between these two cases (but no idea whether it does in this context), so it might make a difference.
Author of The Black Cross of Aleron campaign and Default++ era.
Maintainer of Steelhive.
Top

From what I remember of the help code, it doesn't check either empty or blank.
Creator of Shadows of Deception (for 1.12) and co-creator of the Era of Chaos (for 1.12/1.13).
SurvivalXtreme rocks!!!
What happens when you get scared half to death...twice?
Top

Code for the ability inspire (note: I realize it is outdated and i will update with the new filter options at some point). It is duplicated 5 times for each level (0-4)

Image of what happens: 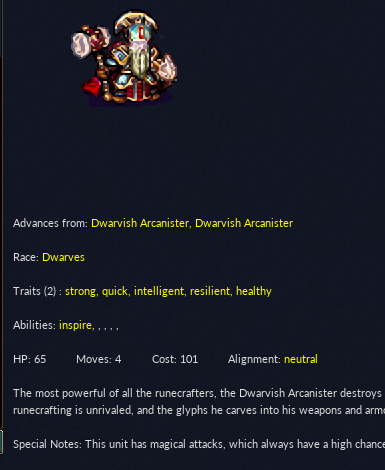 Was he talking about help? I thought he meant reports (on the sidebar). Not that it matters, what I said still holds.
Author of The Black Cross of Aleron campaign and Default++ era.
Maintainer of Steelhive.
Top

I assumed he was talking abut help. But the sidebar is a possibility, too...
Creator of Shadows of Deception (for 1.12) and co-creator of the Era of Chaos (for 1.12/1.13).
SurvivalXtreme rocks!!!
What happens when you get scared half to death...twice?
Top

I was talking about help as seen by the screen shot above...

I didn't notice any with the sidebar.
Creator of: The Reign of The Lords Era,The Gnats Franken Dungeon
Co-designer of the (not-wesnoth) space combat video game Planet Bounce.
Top

i have a question. the filter_weapon filter for leadership and resistance abilities is not put in 1.13.14. it will be in 1.14? or the idea is abandonned?
Top

I just finished the campaign Northern Rebirth and in the last scenario The Showdown I noticed a strange behavior of the Raksas side: it recruited unit the first turn, and then it don't move these reruited units until one of my units approaches the useful distance to be attacked.

in short, the Raksas side is totally inactive in the first part of the battle, a part the garrison units upon the walls. That's the right behavior?

I posted the replay of the game

Hmmm... I don't remember seeing this behavior 2-3 months ago when I was doing a playthrough/ & fixes, but it's clear from the code that protecting 30,30 (Rakshas's location) is intended to be the highest priority for side 2. Not sure what, if anything, to do about it at the moment.
Maintainer of Secrets of the Ancients, Delfador’s Memoirs, & Wings of Victory
My Add-ons: Random Campaign, Custom Campaign, Ultimate Random Maps, Era of Legends, Gui Debug Tools
Erfworld: The comic that lead me to find Wesnoth.
Top

It won't be in any 1.14 version. It's in master, so when 1.15.0 comes out it will be in that version.
Author of The Black Cross of Aleron campaign and Default++ era.
Maintainer of Steelhive.
Top

1.15? i must be patient before to see there modèle fication in 1.16 stable. i hoped propose leadership abilitities to @shikadiqueen for an possible sequel of ats but i let this in stand by. but i understand tje reason of security. thank you.
Top
Locked
26 posts