This release introduces a huge number of changes and updates to the UI. Until now, different areas of the game have used different UI toolkits, resulting in varying presentation and aesthetics across the game. We've been working hard over the past two months to convert and update the older screens. Multiple screens have been revamped or even completely redesigned.

Most significant of all is the return of the "experimental" multiplayer lobby, which has been thoroughly cleaned up and improved! To go along with it are brand new multiplayer Create and Join Game screens. These are enabled by default; the old multiplayer UI is still available, however, and can be re-enabled in preferences. This option will be removed in the next release.

Alongside that are a multitude of other improvements, including Recall and Advance Unit which now match the new Recruit dialog style introduced in 1.13.5. We've also improved performance and responsiveness of the UI overall; players should notice less lag when performing actions such as scrolling or moving sliders.

Keep in mind the UI transition is not fully complete; there still remain a few areas that we're working on redesigning that will hopefully be included in the next (1.13.7) release.

To go along with the sweet UI changes, we've also added several new terrains by doofus-01! These include new aquatic castles and encampments, updates to stone walls and brand new metal and wooden gates!

Another major change is the upgrade of our internal Lua library to 5.3.3. We've done our best to make sure the transition will be smooth for UMC creators, but we cannot guarantee there will be no issues. Hopefully no one will have any serious problems.

As per usual, this release also comes with the usual multitude of bugfixes and general improvements. Since there are so many major changes, we strongly recommend you test them all out (especially the new multiplayer UI and your Lua code) and report any bugs you find.
Read on for more details about the most notable fixes and additions in this release:

UI Changes»
The following dialogs have been converted to the newer toolkit and improved: There have also been improvements to Load Game: a list of human-controlled leaders in the selected save has been added.

As mentioned earlier, the UI should also be noticeably more responsive, and the font rendering on Windows should be improved.
Additions and changes to the AI»
Tunnel functionality expanded»
Tunnel functionality was expanded and the default behavior was altered in order to make moves through tunnels consistent with all other moves:
Under the Burning Suns»
Miscellaneous Highlights»
Deprecations and breaking changes»
Known Issues

On Debian, the required libsdl2-dev 2.0.4 is only available in stretch (testing) or sid (unstable).
Does Wesnoth 1.13.6 really need that or can it use libsdl2-dev 2.0.2 which is available on jessie-backports?
Top

The change to use a renderer context for the GUI2 canvas causes problems for any install using < 2.0.4.

Not sure what problems in detail though... best you ask in the IRC.
Top

Whoa, been away for a while, this game is looking pretty slick these days- nice work!
Biased Random Damage Mod
Top

Okay i downloaded and installed SDL2 2.05 and the corresponding mixer,image,ttf libs from the source site.
Then successfully compiled, installed and ran Wesnoth.
Thanks!
(Devuan Jessie on ICH10 board i7 with ATI Radeon HD5670)
Top

Great work on the new UI, love it!
There is one thing I noticed. When configuring a multiplayer game, like setting the income, the tooltips overlap the actual amount, which is pretty annoying because I can't see what number I have currently set. 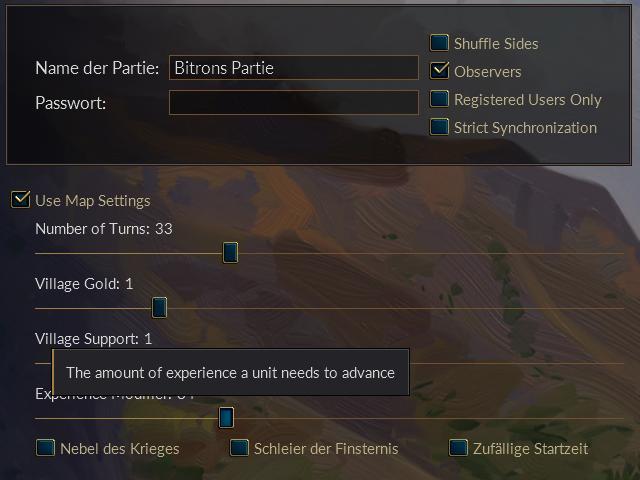 I had a brief look at it and it looks a bit sweeter; don't know yet if I will come to like the new symbols.

I like that [ctrl+o] is back to the title-screen, but is there any reason at all why [ctrl+q] doesn't quit from title-screen to desktop anymore?
I have a cunning plan.
Top

nuorc wrote:but is there any reason at all why [ctrl+q] doesn't quit from title-screen to desktop anymore?

Well, it might be partly because IIRC that shortcut is "Cmd+W" on Mac, and it would be a bit weird for that to quit the program even from the title screen. Though, I doubt many people would actually try it so it might not hurt.
Author of The Black Cross of Aleron campaign and Default++ era.
Maintainer of Steelhive.
Top

nuorc wrote:but is there any reason at all why [ctrl+q] doesn't quit from title-screen to desktop anymore?

Well, it might be partly because IIRC that shortcut is "Cmd+W" on Mac, and it would be a bit weird for that to quit the program even from the title screen. Though, I doubt many people would actually try it so it might not hurt.

I know what Cmd+W usually means on Mac, but in Wesnoth, the default meaning is currently "quit to titlescreen". You could argue that should be changed, of course. In the editor in particular it would make more sense for it to mean "close map"... but if you bound it to "close map" then it would no longer exit the active game.
Author of The Black Cross of Aleron campaign and Default++ era.
Maintainer of Steelhive.
Top

Congratulations on the new release and thanks for all the hard work!

I had a few problems when changing the font size in Preferences, particularly when making it larger. I'm using 1280x720 resolution if that's relevant. (Posting here because I don't want to spam the bugtracker, but I can file reports if wanted).

* Viewing certain Help entries with font size > 100% crashes the game. (e.g. For me, it crashes when trying to view the "Dwarves" page under Units at 110%.) And at smaller font sizes, the text in Help will run onto the unit portraits.

* Very large (120% or greater) font sizes will cause some of the icons for the minimap to show up as "image not found." Large fonts also cause many things such as the numbers across the top of the screen to get partially cut off.

And a minor nitpick: Changing the font size while on the titlescreen does not immediately increase the font size for items on the titlescreen.
Another minor nitpick: If you make the font < 100%, then close and reopen Preferences, you'll only be able to see the first 2 digits of the percentages on the font slider.
---------
On a unrelated note - for the sliders in Preferences, I don't like how you have to click and drag the slider to where you want it now. I liked it better when you could just click where you wanted the slider to go like in 1.12.
Screenshot playthroughs: Let's Play Dead Water, Let's Play Invasion from the Unknown and Let's Play After the Storm
Top

The credits also don't show up if you have many addons installed, if I recall correctly; this is a known bug that will be addressed once we figure out how. (It wouldn't hurt to file a bug report though.) I was also aware of other problems with large text (like things getting cut off), but the crash in help and missing images are new.

The newer sliders need a bit of work still, as I recall. They don't snap to valid positions the way the old ones did. What you describe however is something I hadn't noticed, so thanks for mentioning it.
Author of The Black Cross of Aleron campaign and Default++ era.
Maintainer of Steelhive.
Top
Locked
198 posts