This is a maintenance release for the stable 1.12.x series, and it is fully compatible with previous releases in the series. As is the norm for updates to a stable series, this version delivers an assortment of bug fixes and other minor improvements in various areas, as well as translation updates. Read on for a list of the most notable fixes in this release, as well as a few known bugs we hope will be fixed in future releases. Players coming from 1.10.x or previous stable versions should check our official release notes for Wesnoth 1.12 to learn about the new features and general improvements from this series.

[ Expand all ]
Multiplayer/replay synchronization fixes»
Whiteboard/planning mode fixes»
A bug that caused the game to crash to desktop when attempting to plan moves for planned recruits was fixed in this release (bug #18637 [Gna.org], pull request #497 by Wedge009).

A user interface glitch where the wrong unit would be displayed when changing selection while planning a move was fixed as well (bug #20299 [Gna.org], pull request #523 by Wedge009).
Mainline campaign fixes»
Fix for crashes on illegal textdomain declarations»
The switch to Boost.Locale in 1.11.19 introduced a new requirement for textdomain declarations to not contain forward slashes / in them, as the character has a new special meaning that can cause unexpected behavior and even crash the game during initialization on Windows in particular (bug #23839 [Gna.org]).

This issue has been solved by ignoring such textdomain declarations instead (writing a warning to stderr each time). Because no-one actually uses / in textdomains, this only really addresses a trivial typo wherein the [textdomain] name and path could end up in the same line.
Map/scenario editor Recent Files menu»
This release sees the addition of a list of recently used files to the File menu in the editor. This small convenience feature is provided mostly to make up for the lengthy development cycle ahead of us for 1.13.x, as well as to help map creators be more productive and focus more on creation than on navigating folders with our clunky file dialog.

The menu has a default entry count limit of 10, which can be configured in Preferences → Advanced.
WML menu items and events in the Gamestate Inspector»
The Gamestate Inspector now allows content creators to examine events and WML menu items active for the current game state, with full parsed WML dumps (i.e. with macros substituted and expanded).
Uniform font rendering settings on X11 and Apple OS X»
This release forces a specific font rendering configuration for Apple OS X and X11-based platforms (e.g., most Linux distributions and BSD derivatives with a graphical user interface), disabling subpixel hinting and using grayscale antialiasing only; this is intended as a work-around for color glitches resulting from incorrect applications of subpixel hinting in the majority of Wesnoth’s user interface components (see bug #20337 [Gna.org]).

The following issues affecting Wesnoth on Apple OS X are known and they are pending fixes. However, many of them are beyond the scope of the 1.12.x series and require significant re-engineering that can only be done in 1.13.x development releases later, or cannot be properly addressed due to a lack of experienced OS X coders in our team. Thus, unless someone can contribute patches to address them, it is unlikely that these bugs will be fixed during the 1.12.x series.
[/list]

There are a few more changes in addition to the aforementioned, including translation updates and minor bug fixes. Most of these are listed in the full changelog. An alternative players changelog is also available, including only items deemed relevant for regular players. Note that for this particular release, there are a few items that were not added to the changelogs in a timely fashion; those can still be found in the list above.

Do you want to help shape the future of Wesnoth? You are always welcome to join us in the #wesnoth-dev IRC channel on irc.freenode.net to ask for help with getting started!

Apple OS X app package (400.2 MB)
SHA256 sum: c2a446b1dcea882b93e057d8fb2291d6728a081bf300ac86bacc99216888be0e
All known Linux packagers have been contacted, and binaries for your distribution may have already been created. Information about where to get the respective binaries or how to install them can be found on the Linux binaries page in the wiki.

It was observed that when a 1.12.4 and a 1.12.5 client play together they see false positive OOS reports when players recall units.

For obvious reasons this effects only (mp) campaigns like LoW or WC.

Until this has been fixed players should ignore all OOS errors about unit checksum mismatch.
Scenario with Robots SP scenario (1.11/1.12), allows you to build your units with components, PYR No preperation turn 1.12 mp-mod that allows you to select your units immideately after the game begins.
Top

You will also the the problem described above in game replays (regardless of whether it is MP or single-player) whenever a recall or recruit action takes place. Server generated-replays from replays.wesnoth.org, as well as observing or joining games, are purportedly not affected by this bug.
Author of the unofficial UtBS sequels Invasion from the Unknown and After the Storm (now available for Wesnoth 1.14.x and 1.15.4+).
Top

No, I don't think that's something that would get ported to 1.12. The main reasons would be that it'd look awful if it appeared side-by-side with custom water terrains from add-ons, and because if add-ons updated their water terrains to be based on the new one, they'd not work with any older versions (such as 1.12.5). Neither is a very nice thing to happen, especially so late in the 1.12 series.

If it was as simple as just replacing the old images with new ones, we could, but it's a bit more involved than that.
Top

The title gets cropped strangely in scenario introductions for some resolutions. I noticed it in Dead Water at 1280x1024. I've attached a screen-shot, the upper left corner should say "Flight"
Spoiler: 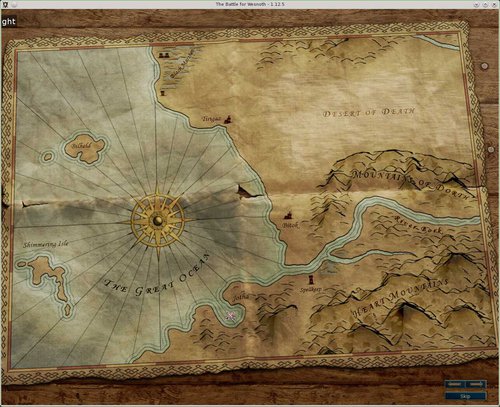 No, I don't think that's something that would get ported to 1.12. The main reasons would be that it'd look awful if it appeared side-by-side with custom water terrains from add-ons, and because if add-ons updated their water terrains to be based on the new one, they'd not work with any older versions (such as 1.12.5). Neither is a very nice thing to happen, especially so late in the 1.12 series.

If it was as simple as just replacing the old images with new ones, we could, but it's a bit more involved than that.

Oh that's a shame, maybe you could just add it anyway as the more realistic looking water is cool. By the way thanks for all the updates and hard work. Wesnoth is the best!
Best [censored] Pumps is the ultimate tool to get extra size.
Top
Locked
7 posts • Page 1 of 1