Forum rules
Before reporting issues in this section, you must read the following topic:
Post Reply
2 posts • Page 1 of 1

Encountered a strange bug in chapter two of the Legend of Wesmere.
We were playing with two players on the multiplayer server. The non-host (blue team) has three units in its keep which are assigned to side 4 (which is an enemy side). See the attached screenshot. You can see the blue leader plus three purple units. 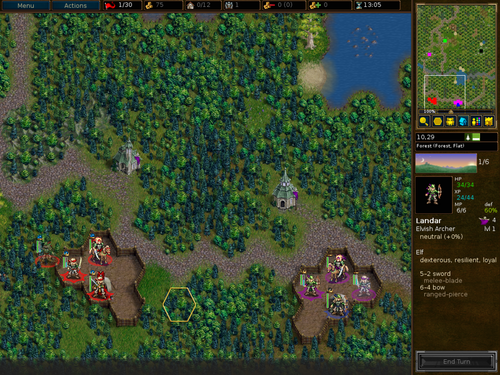 You will also notice that both human teams have two leaders.

The extra purple units are not visible on the host side, however. This is a screenshot of the same game from the host's point of view: 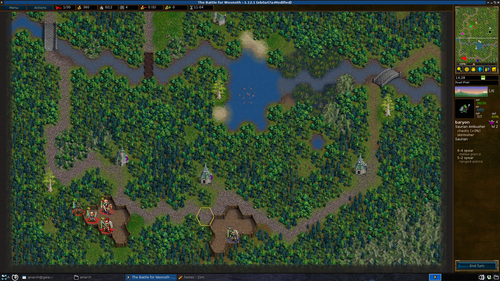 As you can see, the extra purple units are not there, but there is still an extra leader unit in the red team''s keep. One of these leaders is an Elvish Captain, the other is a Fighter, but they are both marked as leaders and have the same name (Kalenz).

This weird bug popped up when we reloaded the game, but then I created a new game using the entry point selection box to start afresh at chapter two. The same thing happened. I'd be interested to hear if other people can reproduce this bug. I have not noticed it with any other multiplayer scenario so far.

The purople units there are most likeley recalls from teh previous scenario from the blue team. It seems that unfortualteley these units were aded to the ai sides recall list instead of ladars side.

The reason why the observer does not see them is most likeley that here: the recall list ("persistant" attribute) is handeled differently for "ai" and "network_ai" controllers.
https://github.com/wesnoth/wesnoth/blob ... m.cpp#L222

I wonder whether the units were still present on landars recall list or not.
Scenario with Robots SP scenario (1.11/1.12), allows you to build your units with components, PYR No preperation turn 1.12 mp-mod that allows you to select your units immideately after the game begins.
Top
Post Reply
2 posts • Page 1 of 1