This is a maintenance release for the stable 1.12.x series, and it is fully compatible with version 1.12.0. As is the norm for updates to a stable series, this version delivers an assortment of bug fixes and other minor improvements in various areas, as well as translation updates. Read on for a list of the most notable fixes in this release, as well as a few known bugs we hope will be fixed in future releases.

Players coming from 1.10.x or previous stable versions should check our official release notes for Wesnoth 1.12 to learn about the new features and general improvements from this series.

[ Expand all ]
Multiplayer lobby, game creation, and gameplay fixes»
Cross-platform Unicode support fixes»
Although 1.12 RC 1 and 1.12.0 already included most of the required code to allow Wesnoth to be installed and run from paths including international characters on Windows and other platforms, a couple of oversights have been found and subsequently addressed since the last release. In particular:

Editor start-up performance degradation fix»
Also related to the cross-platform Unicode fixes from 1.11.19, this release solves an issue wherein starting the editor several times in the same session would take considerably longer each time.
Help fixes for unit type variations»
WML parser and preprocessor fixes»
This release includes a fix for a regression from Wesnoth 1.11.19 resulting in Unix-style hidden files (dot files) being matched by directory {inclusions} in WML, affecting all builds using the new filesystem code regardless of platform.

A long-standing issue introduced after the stable 1.8.x series (bug #22962 [Gna.org]) causing nested macro substitutions to bind subsequent translatable strings to the default wesnoth textdomain was also fixed for this release.
Classic 1.10 UI theme added»
The themes selection in Preferences → Display sees the addition of a new “Classic” theme that restores the gray in-game interface design from Wesnoth 1.0 – 1.10. Please note that due to engine limitations at this time, this and other themes only alter the appearance and contents of the game menu and sidebar, leaving other elements unchanged (e.g. dialog boxes, multiplayer lobby).
Miscellaneous fixes and improvements»
Known bugs»
General bugs:
Bugs specific to Microsoft Windows:
Bugs specific to Apple OS X:

The following issues affecting Wesnoth on Apple OS X are known and they are pending fixes. However, many of them are beyond the scope of the 1.12.x series and require significant re-engineering that can only be done in 1.13.x development releases later, or cannot be properly addressed due to a lack of experienced OS X coders in our team. Thus, unless someone can contribute patches to address them, it is unlikely that these bugs will be fixed during the 1.12.x series.
[/list][/list]

There are a few more changes in addition to the aforementioned, including translation updates and minor bug fixes. Most of these items are listed in the full changelog for enthusiasts and content creators. An alternative players changelog is also available, including only items deemed relevant for regular players.

Apple OS X app package (385.7 MB)
All known Linux packagers have been contacted, and binaries for your distribution may have already been created. Information about where to get the respective binaries or how to install them can be found on the Linux binaries page in the wiki.

Maybe I missed something, but unlike in the pictures above, the icons for the mini map are now to the left of it - instead of underneath - and the zoom slider is missing: 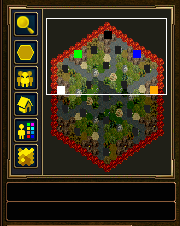 
I noticed that in the online support section the getting started and manual are still featuring 1.10 graphics and probably descriptions; I don't feel up to it, but has anybody considered updating it?
I have a cunning plan.
Top

The layout of the minimap changes depending on the window size. For larger sizes, the buttons are below the map, and there is a zoom slider like the pictures above show. For smaller screens/windows, it is displayed like in your image.
Campaigns: Dead Water,
The Founding of Borstep,
Secrets of the Ancients,
and WML Guide
Top

2. I thought enemies now had red orbs in 1.12 (which is confirmed by the help section), but they do not in my install. Any idea why?

3. It seems the [game_config] page in the wiki is not up-to-date as there are many differences with the file on my install (everything in the [images] tag at least).

4. See the editor bugs I reported in the 1.12.0 topic.
Here are some other ways to crash the editor:

- Create a first scenario with two sides but do not place any unit. Create a second scenario. Trying to create a side crashes the editor.

5. Closing the editor window (through the window manager controls) does not prompt the user with the option to save changes.

@beetlenaut: Thanks for your reply. I will now try to see it as a feature.

Thanks for the report. The second issue will be fixed in 1.12.2. The first and third issues will have to wait for 1.12.3, though.
Author of the unofficial UtBS sequels Invasion from the Unknown and After the Storm (now available for Wesnoth 1.14.x and 1.15.4+).
Top
Locked
7 posts • Page 1 of 1