A new stable series begins, following nearly three years of development and almost 8,500 commits. We wish to thank you, our vast community of players, content creators, and fans for your continued support; it is your feedback, bug reports, and boundless creativity that keep Wesnoth’s development moving forward.

We hope you will enjoy this first release!

As on previous occasions, we have prepared official release notes including all the highlights for this new series, translated to other languages. If you want to learn what’s new since version 1.10, go read the release notes! The “full” changelog is also available listing most of the changes in over 1,900 lines, as well as the players changelog including only items deemed relevant for the average Wesnoth player.

It is possible to use your saved games and preferences from the 1.11.x series with 1.12.x by copying over the contents of your user config and user data folders from the old version. See EditingWesnoth in the wiki for instructions for locating these folders.

Here is a list of the most important changes since 1.12 RC 3:

[ Expand all ]
Cross-platform Unicode support fixes»
Two regressions were found in the new internationalization and filesystem code introduced in version 1.11.19, and fixed in this release.

The first of them caused Linux and Apple OS X builds using the new library dependencies to present encoding issues when the “System default language” option was selected in the Language menu instead of a specific language such as English; this caused non-ASCII characters (including punctuation) to vanish from the game (bug #22921 [Gna.org]), as well as other peculiar side-effects with string operations (bug #22791 [Gna.org]).

The second regression was less visible and primarily concerned special applications of Wesnoth requiring the creation of directory trees based on a relative path without an explicit parent (e.g. in wesnoth -p data/core foo instead of wesnoth -p data/core ./foo).
Start-of-scenario saves disabled in multiplayer»
Since we were not able to solve bug #22068 [Gna.org] in time for 1.12.0, we have instead disabled save generation at the start of MP scenarios.
User interface improvements»
Windows-specific post-release erratum for bug #22967»
Shortly after release, a bug was encountered with Windows builds of versions 1.11.19 and 1.12.0 that breaks some add-ons and a mainline campaign (bug #22967 [Gna.org]).

The following issues affecting Wesnoth on Apple OS X are known and they are pending fixes. However, many of them are beyond the scope of the 1.12.x series and require significant re-engineering that can only be done in 1.13.x development releases later, or cannot be properly addressed due to a lack of experienced OS X coders in our team. Thus, unless someone can contribute patches to address them, it is unlikely that these bugs will be fixed during the 1.12.x series.

Wesnoth 1.12.0 was made possible by the contributions of countless players like you, as well as the work done by our Google Summer of Code students during 2012 and 2013.

Windows installer package (355.7 MB)
Apple OS X app package (385.7 MB)
OpenPandora package (375.1 MB)
All known Linux packagers have been contacted, and binaries for your distribution may have already been created. Information about where to get the respective binaries or how to install them can be found on the Linux binaries page in the wiki.

Congratulations to all developers and people who are listed above for releasing the new stable version.

I appreciate it.
Fate of a Princess/feedback thread: "What is in own heart that is the most important, not who you are."
Drake Campaign: Brave Wings/feedback thread, Naga Campaign: Return of the Monster, Saurian Campaign: Across the Ocean
Northern Forces - now on 1.12 server
Top

Congratulations on getting the release out

First successful 'bugfix' that straight away caught my eye:
I always felt that wooden dowels would look better on the map table of the main screen
than rather new nails from some ACE hardware store. Some timid attempts to improve
the image failed: the nails were solidly wedged in massive planks, heads almost buried,
tough to grab or drive them through – good Wesnothian carpentry, maybe even dwarven...
But some artist managed to pull them out without damaging the wood!
If all improvements and fixes work equally well, BfW 1.12 is kicking off in the right way.
Knock on wood – and thanks to everybody out there who supported this release!
Top

My congratulations too. Looks very slick.

How disappointing that the third-party bug causing part of the last letter to be cut off in the help tips screen is still not fixed. That must be annoying. (Is that a Mac-only annoyance? I don't remember)

I do have one minor thing I'd like to note - when you download on Mac (on a typical end-user's Mac with 'Security and Privacy' settings set to 'Mac App Store and identified developers'), you get the warning about this being untrusted software not from the App Store or a registered developer ('Wesnoth is an application downloaded from the Internet. Are you sure you want to open it?'). Most devs won't see this, because they'll have set more liberal download policies. Given how well-respected Wesnoth is, I wonder whether Wesnoth could become properly registered? Is that feasible for a free game, or do you have to pay for the privilege?

If it's only a small sum, I'll donate the money myself.
Top

How disappointing that the third-party bug causing part of the last letter to be cut off in the help tips screen is still not fixed. That must be annoying. (Is that a Mac-only annoyance? I don't remember)

I do have one minor thing I'd like to note - when you download on Mac (on a typical end-user's Mac with 'Security and Privacy' settings set to 'Mac App Store and identified developers'), you get the warning about this being untrusted software not from the App Store or a registered developer ('Wesnoth is an application downloaded from the Internet. Are you sure you want to open it?'). Most devs won't see this, because they'll have set more liberal download policies. Given how well-respected Wesnoth is, I wonder whether Wesnoth could become properly registered? Is that feasible for a free game, or do you have to pay for the privilege?

If it's only a small sum, I'll donate the money myself.

It's currently US$99 per year. https://developer.apple.com/programs/mac/ It's not mentioned obviously on that page, but the program provides a signing key as part of access to the App store, though it can be used separately.
Top

$99 as a one-off is OK by me. Same ballpark as commercial games. Worth celebrating the new release.

Thanks Alarantalara for saving me from digging through Apple's pages.

Is flattr the best way, then? They take 10%. If someone Official can message me if Wesnoth does want to take me up on the offer, that would be great. Tx.
Top

Congrats! I guess it's about time for me to end my wesbreak
Oh, I'm sorry, did I break your concentration?
Top

We still have the "level" truncation bug in the UI.

If this can't be fitted on screen like it was before, we still should absolutely not truncate the numbers, but something else. I also don't understany why both numbers truncate. 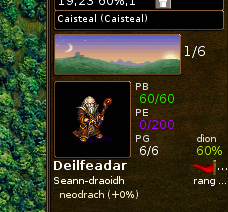 GunChleoc wrote:We still have the "level" truncation bug in the UI.

Is there an associated bug report?
Top

About the image posted by GunChleoc
Well... I can add that the 1.10 version was better, becouse more ordered and using greater fonts.
Current fonts are too small.

I appreciated, instead, the idea of putting the turns of time schedule (example: 2/6)
Top

Nobun wrote:I appreciated, instead, the idea of putting the turns of time schedule (example: 2/6)

Why? Few days ago I was playing with 3 veterans friends in 1.12 and we all agree in dislike it. From our point of view is like write "poisoned" next to status green skull icon when unit becomes... poisoned. Why write a word when you have an icon that already says it, and even a tooltip with more details written?
Be aware English is not my first language and I could have explained bad myself using wrong or just invented words.
World Conquest II
Top

I agree with your opinion, in general (in the the example of "poisoned", I agree 100% with you).

About day schedule: Yes... it is an almost useless in standard schedule and it is almost useless for pro players or even players that played wesnoth for a bit (in standard schedule).... but perhaps it can be helpful in two different situations:
1) noob/newbie players: that information can help them to understand better how monrning/night day structure works and may help them to have a direct vision about turns required to come back to good/evil time of day
2) when schedule is NOT standard (example campaign): think about a scenario where it is always night (ex. first watch). In that case the value 1/1 could allow the player to understand immediatly that day will never arrive (yes.... after playing a bit you can understand it, but in this way you are sure to understand it immediately).

However what I am trying to say that the new structure that shows unit info is too much confusing and harder to read than before. The old one was a lot better.
But, if I must find something that is not totally bad, this is the time of day information (for the reasons I said before).

Yes... I agree it is an useless information (at least for me), but - in a general view - I cannot exclude that the new "schedule day fraction information" can have some sense, mainly thinking about the two situations I said before.
Top

GunChleoc wrote:We still have the "level" truncation bug in the UI.

Is there an associated bug report?

Doesn't seem like there is, although this issue has been raised 3 times on the forum.

I have an account on the bug tracker, but where is the "Report a bug" button?
Scottish Gaelic Translation of Wesnoth
Top
Locked
31 posts