You may be wondering why we skipped the announcement for version 1.11.14 and branded 1.11.15 as our fifth 1.12 beta in its stead. The truth is, we did plan to release 1.11.14 on May 12th, and even went as far as to tag it in our source code repository, as a few players and coders may have noticed. However, much like with version 1.11.3 and a few others before, some serious regressions were found by the release team shortly after tagging. In light of their impact on the game’s playability, we chose to wait some more time for our developers to fix them and save everyone the trouble of coping with issues of which we were already aware. It Is Ready When It Is Ready is our unofficial motto for a reason, after all!

After amending those bugs and then a few more, we can now publicly announce our fourteenth development release in this series. 1.11.15 packs a generous number of bug fixes and improvements made since 1.11.13, and since a considerable share of them were committed following the failed 1.11.14 attempt, you could say this is a 50% discount release!

Remember that, as it has been the case for all development versions since 1.11.10, a feature and string freeze is in effect to facilitate testing, bug fixing, and translation efforts; although this beta does not include any new features for this reason, we still need your help to ensure the best possible quality for the upcoming Wesnoth 1.12.0 stable release:
Everyone willing to test this beta release should report any bugs they encounter, be they issues found during normal gameplay, or when working with WML or Lua for add-on content. Every properly-filed bug report is useful to us, no matter how trivial or obvious the issue may seem to be.

Typos in the English text of the game should also be reported in the wiki so they can be amended as soon as possible.

Here is a list of the most important changes since the last development release:

[ Expand all ]
Incompatibilities with previous 1.11.x versions»
gfgtdf and iceiceice have been hard at work fixing bugs affecting multiplayer and replay synchronization, multiplayer campaigns, and more exotic MP scenario configurations! Unfortunately, due to an oversight this resulted in breaking compatibility with previous versions again, particularly due to WML syntax improvements and fixes for existing unintended or unspecified engine behavior. We apologize for the inconvenience of this.
Changes to the WML engine and victory condition checking»
Following discussions with mainline and UMC developers who had concerns about changes in 1.11.x regarding the frequency with which the engine checks the victory conditions of a scenario, the solution previously included in 1.11.13 has been revamped.
In 1.11.15 and forward, Wesnoth checks for victory/defeat of sides more or less at the end of any player action that is synchronized over the network (non-undoable moves, attacks, recruits, WML-defined menu item actions, and so on); this is to say, not only at the end or start of a turn, but also at the end of moveto events and similar. It will not interrupt an attack to end the game, and it will not check in between two events invoked by the same player action, but you should assume it will check more frequently.

Please note, there is NO backwards compatible support in the engine for these syntactic changes, breaking compatibility with Wesnoth versions 1.11.7 – 1.11.14.

The victory check process is simple: for each non-empty side (a side for which the controller attribute is not empty), Wesnoth will check its defeat condition according to the units currently on the map. Then, if any two non-defeated sides are enemies, the game will proceed. Also, in the case that victory_when_enemies_defeated is false, and there is a not-defeated human-controlled side, the game will proceed. Otherwise, the game will end.

The majority of campaigns will work exactly the same as before, and in many very simple cases the engine now works better than before. However, if some scene in your campaign does not work properly anymore because you were removing all the units, or expecting that they would not be removed from carryover when their side was defeated, we expect that you now have all the tools you need to make it work, by setting sides to be “never defeated” before removing all their units, or toggling remove_from_carryover_on_defeat, etc.
User interface fixes»
Several fixes for UI regressions introduced in past 1.11.x releases are included in this version:

Fixed image color glitches on OS X»
As reported on the forums, previous releases were affected by a color format issue on OS X and other platforms where loaded images might not be in the format expected by the game engine. This bug (#22045 [Gna.org]) is solved in this release.
[i]Son of the Black Eye[/i] balancing improvements»
Some minor tweaks were applied to this campaign’s scenarios “The Desert of Death”, “Silent Forest”, and “Back Home”.
Known issues»
As usual, there are many more changes in addition to the aforementioned, including translation updates and fixes for recent and long-standing issues. Most of these items are listed in the full changelog. There’s also an alternative players changelog including only those changes deemed to be relevant for regular players. Finally, an announcement including a list with the most notable changes between 1.10 and 1.12 will be made available along with the 1.12.0 release when it is ready.

The Windows, OS X, and OpenPandora packages are already available and can be found on the Download page in the wiki.

All known Linux packagers have been contacted, and binaries for your distribution may have already been created. Information about where to get the respective binaries or how to install them can be found on the Linux binaries page in the wiki.

⁂
The multiplayer server for 1.11.15 is up and running. This server can be used to play with other players running 1.11.15 and later 1.11.x and 1.12.x versions, unless a future bug fix requires raising the version requirements again.

The add-ons server for 1.12.x is already running. It was started for 1.11.10 and it will serve all future beta and RC releases from this series, as well as all releases in the stable 1.12.x series. If you encounter any problems involving add-ons not working as expected, please notify the content’s author or maintainer.

It seems that "Skip AI moves" has become a bit too aggressive: now the enemy units vanish permanently as soon as they move! You have to deselect the option in preferences and save/reload to bring them back.
Campaigns: Dead Water,
The Founding of Borstep,
Secrets of the Ancients,
and WML Guide
Top

It should be easy enough to pin down and fix, later.
Wesnoth UMC Dev
Stories of Tarlyn (on hold) - Era of Strife - The Dark Hordes
Top

Is there a way to make the middle mouse scrolling behave as it did in the 1.10.x versions? It's kind of, I don't know, mushy now. Also, is the old dark UI theme gone now?
Biased Random Damage Mod
Top

you can bring back a classic theme in the theme menu, but that only effects the scenario play veiw, not the dialogs.
Scenario with Robots SP scenario (1.11/1.12), allows you to build your units with components, PYR No preperation turn 1.12 mp-mod that allows you to select your units immideately after the game begins.
Top

Thank you that bug 21961 is fixed. Also, I noticed that all your save files and preferences are carried over from your previous edition. Is this new? Either way, it's fantastic.
SP Campaign: Rally For Roanic
Top

gfgtdf wrote:you can bring back a classic theme in the theme menu, but that only effects the scenario play veiw, not the dialogs.

This is all I have, default is the new one: 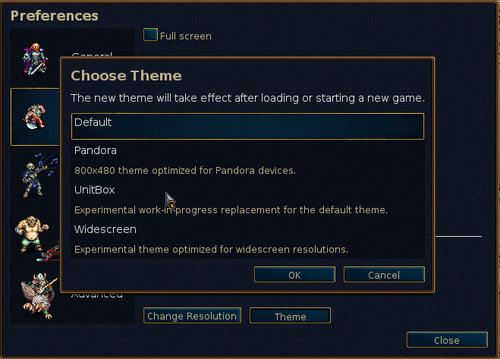 From what fabi told me, the classic theme was committed to master (1.13.0-dev), but it can’t be backported to 1.12 until version 1.12.0 is released.
Author of the unofficial UtBS sequels Invasion from the Unknown and After the Storm (now available for Wesnoth 1.14.x and 1.15.4+).
Top

do you know the reason ?
Scenario with Robots SP scenario (1.11/1.12), allows you to build your units with components, PYR No preperation turn 1.12 mp-mod that allows you to select your units immideately after the game begins.
Top

do you know the reason ?

shadowm wrote:Remember that, as it has been the case for all development versions since 1.11.10, a feature and string freeze is in effect [...]

The string freeze for 1.12 will be lifted after 1.12.0 is released.
Author of the unofficial UtBS sequels Invasion from the Unknown and After the Storm (now available for Wesnoth 1.14.x and 1.15.4+).
Top

Looks like villages flag image layer have changed from 1.10 versions. Now when I place a image on same hex with [set_item] the flag image is covered, wich is a behavior different from 1.10 and I find it undesired.
Be aware English is not my first language and I could have explained bad myself using wrong or just invented words.
World Conquest II
Top

tekelili wrote:Now when I place a image on same hex with [set_item] the flag image is covered

Yes, this is new. I also think it's a problem. If you make your own village out of a tent or temple or whatever, it doesn't look right.
Campaigns: Dead Water,
The Founding of Borstep,
Secrets of the Ancients,
and WML Guide
Top

Crow_T wrote:Is there a way to make the middle mouse scrolling behave as it did in the 1.10.x versions? It's kind of, I don't know, mushy now.

I am the person responsible for the change there. Before the middle click scrolling seemed to me and a couple of others to be a bit hard to control. I changed it so that it is more like the Firefox middle click scrolling. This should make it easier to be more precise and if you want to scroll quickly like before you would move the cursor away from the point where you clicked and wait for it to scroll. Maybe it needs a cursor whilst scrolling at the point where the middle click was made?

Out of interest Crow_T, did you actually use the 1.10 middle click scrolling when playing?
Top

Coffee wrote:Maybe it needs a cursor whilst scrolling at the point where the middle click was made?

How about a directional arrow? It scrolled the opposite direction from I expected. There's nothing wrong with that, but an arrow would have made it clear why the view wasn't going anywhere.
Campaigns: Dead Water,
The Founding of Borstep,
Secrets of the Ancients,
and WML Guide
Top

beetlenaut wrote:It seems that "Skip AI moves" has become a bit too aggressive: now the enemy units vanish permanently as soon as they move! You have to deselect the option in preferences and save/reload to bring them back.