A New Land Classic is a set of multiplayer maps for Wesnoth 1.10. It has more maps and more factions than the mainline map, 4p - A New Land. Here, crops grow thrice in one day, mines offer gold, and universities teach victory. Players build more villages and castles.

A New Land Classic 0.14.4 is on the add-on server! To install: open Wesnoth, click "Add-ons", connect to default server (add-ons.wesnoth.org), search for "A New Land Classic", and download.

Mercurial repository:
The tip version 0.14.4+hg contains the newest changes, but might have more bugs. To download it: Or clone with Mercurial:
Credits Some parts come from mainline Wesnoth.

Included maps
Original First Post:
I am converting an add-on, A New Land Classic, from Wesnoth 1.8 to Wesnoth 1.9. This add-on includes one era (A New Land: Expanded) and two scenarios (The Last Stand and The Great Wall). My conversion is not complete, and is not ready for the add-on server. My code is at https://bitbucket.org/kernigh/a_new_land_classic. (EDIT: Fix broken link.)

A New Land is a set of multiplayer scenarios. Peasants can work farms and mines, build villages and castles, and terraform land. Mages can study at universities. Bob_The_Mighty and contributors made this add-on, A New Land, for Wesnoth 1.2 and 1.4. The mainline scenario, 4p - A New Land, appeared in Wesnoth 1.6. ReNoM converted this add-on from Wesnoth 1.4 to 1.8 and renamed it to A New Land Classic. This last version, A New Land Classic 0.13, is from the 1.8 add-on server, but only works with 1.8, not with 1.9.

Also, 0.13 for 1.8 still has several bugs (more than mainline's 4p - A New Land). I already fixed some bugs in my 0.13+hg for 1.9: I restore the missing right-click help, and fixed the chests in The Great Wall. To try my code:
Please use this thread to ask questions and report bugs.
Old Threads:
Last edited by Kernigh on June 18th, 2012, 10:48 pm, edited 10 times in total.
--Kernigh http://www.wesnoth.org/wiki/User:Kernigh
Top

I played ANL:E on BFW 1.8.6. Looks like I will be first who give you feedback

First of all, I want to say: You need special maps for your era.

Second. "Engine" bugs: Third. Suggestions. Some thinking about maps:
There is type with "allow_player=no" in scenarios/TLS/define_sides_ai.cfg. It used twise in [side] tag.
Spoiler:

xudojnik wrote:Player research warfare and choose unit (for example Spearman) to add to recruitment list.
When he reserch warfare again, list of possible units contains unit, chosen in previous research. (player can choose "spearman" again) There are no error when you choose same unit again. (Player can loose it's reserach because of misclick)

Thank you for the report. Moments ago, I fixed this bug in revision b1f1ee144247. I now remove units from list if the player can already recruit them.


xudojnik wrote:Undead faction (not sure, but orc and outlaws too) can do nothing with forest. They can't even destroy it.

All four units (Peasant, Ruffian, Goblin Spearman, Walking Corpse) have the same ability to destroy forest. However, the terrain filters are not complete. This is a bug. I encountered a similar problem with A New Land: Expanded on 4p - Isar's Cross. My workers can build mines on some hills and mountains, but not other hills and mountains. To fix this bug, I would need to add the missing terrain codes to A New Land.


xudojnik wrote:Workers should be on the top of recruit list. They are recruited far often than "scholars".

I might not reorder these units, because the recruit list is in alphabetical order. If you play Orcs, the Goblin Spearman appears above the Orcish Shaman. If you learn more recruits, then your workers might be in the middle of the list.


xudojnik wrote:You should rebalance outlaw worker cost. Only reason that their farms and mines produce 1 g fewer is not enough.

I am not sure whether you want to raise or lower the cost of Ruffians. I know that Ruffians are effective against Skeleton Archers and Dark Adepts. I might not rebalance anything until after I make my first release to the 1.9 add-on server.


xudojnik wrote:If you want game where each unit have tactic value, maps should be small.

Small maps might benefit if each side starts with a free university, and perhaps a mine. Otherwise, a player who sinks gold into a university or mine might lose to a player who rushes with a large group of Peasants and Mages.

Small map can benefit, if players will start on separate islands in the sea.

Make short guide about this era (may be as "help" viewable from context menu):
Top

My point of view about maps for ANL.
I choose island-style because of level of control on the amount of grassland, available to player.
The following palette used in this map: 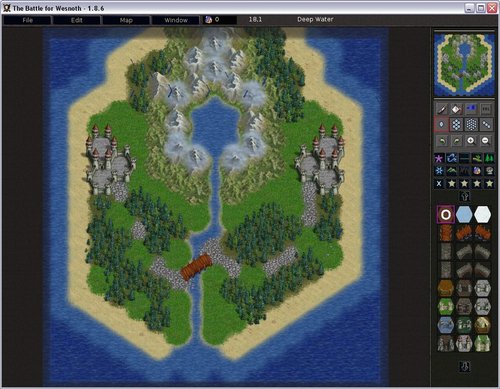 I will put xudojnik's map in my add-on, so that more players can try it. I will invent a name for the map, it will probably be ANL 2p - Isle of <Some-Name-Here>.

By the way, .rar files are difficult to open on non-Windows systems. I can only open them after I recently installed p7zip-rar. To any uploaders, I suggest .zip or .tar.gz files; I prefer these two formats. I can also open .tar.bz2, .tar.xz and .7z files (and now I can open .rar files).

I have converted A New Land Classic to Wesnoth 1.9, but I have not released anything to the add-on server. Before I make a release, I want to review my terrain filters, investigate the last few lint warnings, and make a few other minor tweaks. The next release will probably be A New Land Classic 0.14.0; when it is ready, I will edit the first post. It will be better than the last release (ReNoM's 0.13 for Wesnoth 1.8).

However, my add-on will not work with Wesnoth 1.8. There are at least a few 1.9-isms in my WML code, such as: side filters, [objective][note], commas in [allow_recruit]side=, and commas in [switch][case]value=.
--Kernigh http://www.wesnoth.org/wiki/User:Kernigh
Top

I have played this era for some time and want to point you to the fact, what undead faction have lvl 0 recruit (Vampire bat) after researching warfare. I think it's weird, because noone will choose this recruit after his first experiment. There are a number of lvl 1 units to choose from.

And what about of "Isle of domned Volcano"?
Top

I did read that as "Isle of Domed Volcano". Your map looks like a volcano, but it never uses the new Volcano terrain. (This terrain is unwalkable and puts lava on a mountain.) I did not want to use the word "volcano", so I entered your map as ANL 2p - Dome Isle.


xudojnik wrote:... undead faction have lvl 0 recruit (Vampire bat) after researching warfare. I think it's weird, because noone will choose this recruit after his first experiment.

Thank you for the report. Moments ago, I changed Vampire Bat to Blood Bat, because Blood Bat is level 1. 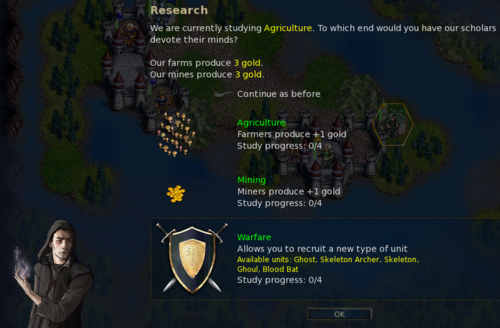 Undead can no longer recruit Tentacles of the Deep.

The options for diplomacy and warfare now show the list of available units. Here, an Undead player sees that "Warfare" offers Ghost, Skeleton Archer, Skeleton, Ghoul or Blood Bat. This information helps each player to decide whether to try diplomacy or warfare. 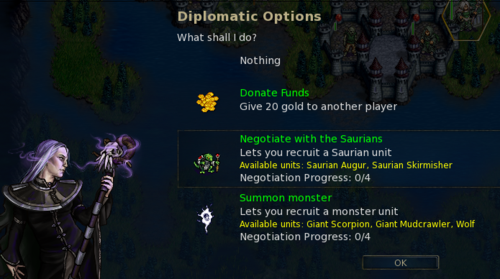 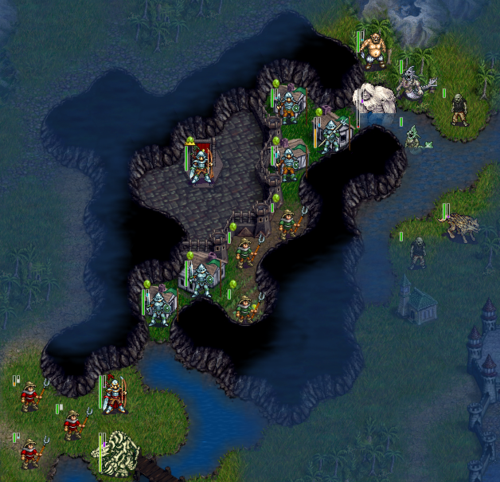 In 5p - The Wilderlands, humans hide in a cave.

The next release, A New Land Classic 0.14.0, might have bugs in it. I am now play-testing to catch the most obvious bugs before I release the add-on. Here I am in 5p - The Wilderlands, cowardly hiding in a cave, trying to hold against a Yeti.
--Kernigh http://www.wesnoth.org/wiki/User:Kernigh
Top

Version 0.14.0 is now on the add-on server. Peasants, ruffians, goblin spearmen and walking corpses: get to work!

EDIT (Sat Feb 4, 2012): Espreon gave me a link to mainline bug #14822 [Gna.org]. A New Land Classic 0.14.2 probably has this same bug. Suppose that your ally researches everything about warfare. In diplomacy, you might still have an option to share knowledge about warfare, though that option is now useless. For 0.14.3, I need to fix this bug by checking if players already know everything about warfare.
--Kernigh http://www.wesnoth.org/wiki/User:Kernigh
Top

The Last Stand became more difficult with 0.14.2 and 0.14.3. Each enemy leader has 4 more gold per turn, because the guards are now loyal. This extra gold accumulates, so you must fight more enemies. I might adjust the difficulty of The Last Stand with 0.14.4.

I have plans to add two more maps to ANL Classic, but players might not see these maps until 0.14.5. If anyone else wants to make maps for this add-on, I might include those maps.
--Kernigh http://www.wesnoth.org/wiki/User:Kernigh
Top

I was watching some people playing with anl extended on a map one of them made, and it came to my attention that the undead have no good options for fighting in large bodies of water. Ghosts are slow and expecive, blood bats are still not exactly powerful and also expecive, skeletons and quick adepts are hopeless. If maps with lots of water are to be supported I'd give them some other water monster or change tentacles to not get stuck.
Top

tadpol wrote:... the undead have no good options for fighting in large bodies of water.

Loyalists send Mermen. Outlaws and Orcs send Nagas. Undead have no water units to send. Suppose that an opponent constructs a moat of shallow water, and fills said moat with, for example, Naga Guardians. An Undead side might have no good way to attack said moat.

Outlaws might be the most powerful faction. I have played and observed multiple slow games. During a slow game, both teams increase income, until the map is too small for more units. Then battles take hours, and everyone quits before the game ends. Can Outlaws recruit 5 or 10 Dwarvish Ulfserkers per turn, and force a gain of several hexes in one turn? Can the Dwarvish Ulfserker be the unit that wins the game?
--Kernigh http://www.wesnoth.org/wiki/User:Kernigh
Top

Problem: In PvP games, battlefield flooded with units and structures.

Solution: Cost of (anything what player can build) should increase with amount of this structures. Any income should be static.