Wesnoth Bestiary
A web site for browsing game and unit information for The Battle for Wesnoth.

Bestiary has been overhauled. Consider this Version 2.
See the latest post here.

To Do (Known Bugs)

What is Wesnoth Bestiary?
It’s a web site for browsing unit information. Part of it is an experiment and self-learning to the wonderful ways of JavaScript, jquery, and web design. As I continue to work on the project, my hopes is it will eventually replace http://units.wesnoth.org.

You can view this live at http://wesnoth.io.

Original Post:
It’s of my humble opinion that our units page could use a facelift. In particular, the unit descriptions. I’d like to be able to look up information and have it load quickly, be accessible and large-print, and be able to access it and maneuver about it on my phone easily.

So I am experimenting with a template for this Wesnoth Bestiary as I am calling it. 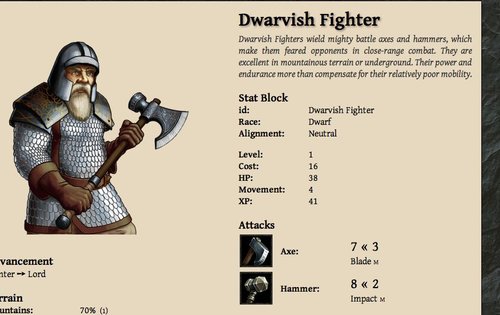 Just a sample of what I’m working on.

The goal here is to make a template that will meet the above needs. Then, present the page using PHP and/or JavaScript, loading content dynamically when the user clicks on a different unit. I’ll then modify the existing converter tool or create a new parser script that will go through the units files and place the information where it needs to be, generating an entire bestiary, and so rebuilding the pages will be easy when a new version of Wesnoth introduces changes (and so people can download the script and make their own Bestiary if they so choose).

It’s all a work in progress, but, you can view my progress right here. Do take note, all there is currently is the Dwarvish Fighter profile (which currently looks like this).

You may need a next generation browser to view this page correctly; likely Chrome 2, Firefox 2, IE 7, Opera 9 or Safari 3 and better.
[/list]

If you're looking at redoing the units page (and I agree it needs doing) you do need to include the sprite(s) there somewhere - they're the unique identifiers for the units. Many if not most units share portraits with at least one other level, after all.

that's one of these fonts that looks quite ugly if you have font anti-aliasing disabled:

I was about to post how the font looks wacky at the moment. Otherwise, it looks great.
http://www.wesnoth.org/wiki/User:Ken_Oh
Think Wesnoth's RNG is unfair/biased/wrong? Click here.
Top

I really support this idea, and I hope you complete your project.

It is dire you keep the loading speed fast though. The current Help menu is too slow. I'm not really comfortable using stuff such as Javascript; it feels weird. But if it works out, do it. Meh.
Top

the unit main page can be a bit slow initially because it has to load 200 images.
Top

Well, if the units page html were structured similarly to ancestral's "Wesnoth Beastiary" (which is very nice and clean HTML) then CSS can take care of all the layout. The page could even have several different CSS versions a la CSS Zen Garden.

Unluckily, the layout of the current version is done with table elements.
Top

One problem that stands out in the current implementation - you set the background colour but leave the text colour to be user-set. If someone has set his browser colours set to light-on-dark (like me), the text becomes unreadable.
Top

Couldn't the design just be similar to the help page packaged with the game?
UtBS revision spriting.
To The Zeromobile!
Top

Alright, thanks for your feedback and support. Work continues!

I’ll be dropping the online font and instead, if Gentium isn’t installed, will look for Palatino, then Georgia.

However, in the lists, the defences starting at and down from Deep Water, as well as the Arcane attack type, are shown over the crumpled paper background, reaching the bottom of the screen. Font is unusual but readable. Screenshot included. 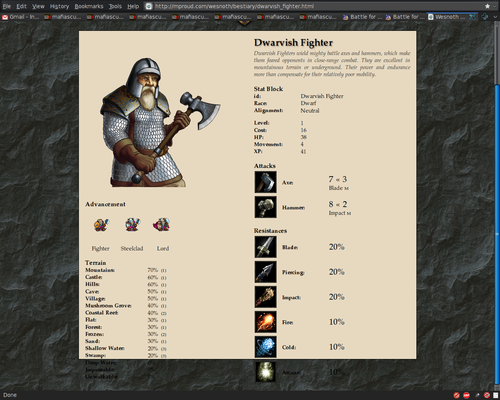 However, in the lists, the defences starting at and down from Deep Water, as well as the Arcane attack type, are shown over the crumpled paper background, reaching the bottom of the screen. Font is unusual but readable. Screenshot included.

No worries, I’m aware of that. It’ll get fixed

ancestral wrote:Alright, thanks for your feedback and support. Work continues!

I’ll be dropping the online font and instead, if Gentium isn’t installed, will look for Palatino, then Georgia.

Only after I’ve gotten down the description page will I begin to tackle the entire unit tree.

Looks great!
Maybe you could show the whole "unit advancement tree" for each unit (rather than just the current branch (edit: though maybe you'd been intending to do that anyway?)).
e.g. you're currently viewing the Elvish Ranger, then it would show (with pictures):

I really appreciate your effort and you have some nice stuff going on here (positive text colour, big numbers, columns)!
I hope you won't mind some detailed crit:

* The right margin (next to the italic text) is too small, it appears (at least optically) smaller than the left one next to the terrain info.
* I'm strongly opposed to using italics for the runing text - worse legibility, needs bigger size (atm it appears smaller than all words set in regular), seems a lot lighter in comparison to the rest and most of all is just a poor substitute for a real "medieval" handwritten feel which I guess you are trying to achieve.
* I'm glad you are using recognizable columns but the distances (blue arrows) are too big atm, resulting in a tattered overall impression. It is important to keep information tightly together to make it comprehendable quickly. Make all the tabulators smaller and bring the numbers closer in.
* I love our attack symbols but I don't think it is a good idea to show them for the Resistances as well. You need a means to differentiate them from the real attacks the unit has or otherwise you'll make things really confusing. You could try to make them smaller or perhaps greyscale. But I think dropping them there would be the most non-ambiguous solution. (But keep the big numbers - those are great!)
* The right side of the terrain table seems to have no reference to your overall grid system.
* The difference between your second headline size (the one you use for advancement, terrain, attacks etc.) and your regular text size in fat (mountains, castle, hill, cave etc.) is too small.
* You have decided to keep your headlines very close to their respective text bodies, which is fine. But you break that principle for the unit advancement where the headline suddenly has tons of free space around it. Stay consistent.
* I guess the numbers in parenthesis are the movement costs - but you really need to label your columns!
* Some letters seem to render strangely occcassionaly, e.g.: the "e" in alignment and movement is huge, the "a" in race is tiny and the kerning is generally poor.
* Have you thought of a solution for units with two gender variants yet?
* Why use a « for the attacks? Is that a new consensus?

To discuss the general layout it would be nice if you could perhaps post your layout grid, I tried to analyze yours and there is quite some stuff that doesn't measure up... 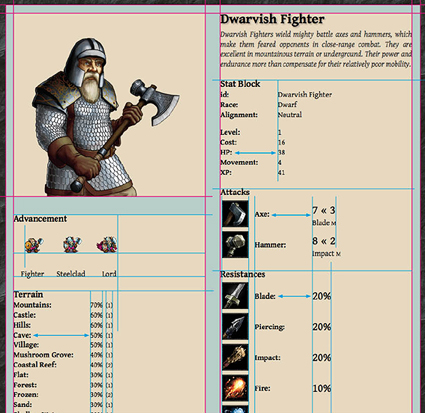