Forum rules
Before posting critique in this forum, you must read the following thread:
Post Reply
35 posts

That's a nicely drawn cuttlefish (so far), but I agree with Sapient that it should look more aggressive and monstrous than they look in real life.
Campaigns: Dead Water,
The Founding of Borstep,
Secrets of the Ancients,
and WML Guide
Top

Sapient wrote:I don't think this is a workable model. Even though it is named Cuttlefish, it is an aggressive, overgrown giant more akin to the mythical Kraken. So, IMO head should be made smaller and tentacles should be larger, to emphasize this extra growth.

Well, the head is mostly made of tentacles. Mythical kraken was an octopus or squid, according to Wikipedia at least.

I went ahead a little further none-the-less. It's still a work in progress, I don't really know how to draw the water being flung off the tentacles yet. 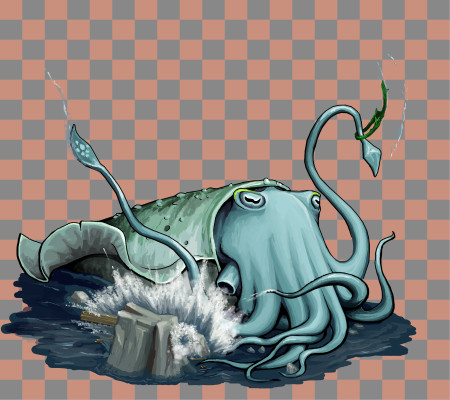 This should definitely be mainlined. Awesome! The cuttlefish has always been a favourite since dead water's inky!
Creator of: The Reign of The Lords Era,The Gnats Franken Dungeon
Co-designer of the (not-wesnoth) space combat video game Planet Bounce.
Top

I am not sure if the stone in the front is adding value. There might be a point in turning the art anti clock wise. Filling the lower left triangle with water and adding water splash to the endings on the lower right side of the portrait for finishing would be great too.
Top

Wussel wrote:I am not sure if the stone in the front is adding value.