Forum rules
Before posting critique in this forum, you must read the following thread:
Post Reply
399 posts

Done. I didn't touch the arms yet, but tampered with the face for a good while. I hope I'm not hoarding too much bandwidth like this

EDIT: you know, it's almost as if it loses some of the contrast when I put it to .png format. or maybe it's the forum? 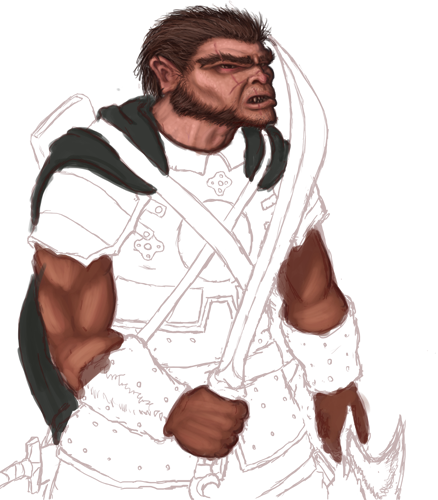 No, that looks fine. I think you need to define your light source carefully when you go over the arms again, though =)
http://thespaceinvader.co.uk | http://thespaceinvader.deviantart.com
Back to work. Current projects: Catching up on commits. Picking Meridia back up. Sprite animations, many and varied.
Top

Great, I'll try to continue in a few hours. And yeah, I mostly sketched the light on the arms just to give them a basic feel of the colours when I finally get to them. I've got a somewhat clear, arrow-pointed light source, but I erase it before posting (so no one can tell me I interpreted it wrong *shifty eyes*).
Oh my, I just realized I just roughed up an orc's face. Not many people can say they've done that.
For the dark gods!
Top

Since you pretty much concentrated on rendering one specific area, I can't say much on the overall impression and have only got one point of critique.
(Lately I notice more and more how bad the advice I give in the portrait tutorial is. Rendering the different parts of the portrait seperately hurts the outcome in many ways, first of all you don't get a really wholistic feeling (and shading) that would grant a much better outcome. I strongly suggest to work with only one layer for the painting (and merge all aditional layers as quickly as possibly!). Trying to define an overall light- and shadow situation for the whole figure and only starting to detail and texturize as late as possible. For me that helps tremendously to give the portrait a more unified and less cell-like feel)

- The skin colour is very red and very, very saturated. We talked about this already a couple of pages back, so I'll keep this short. You need less saturation, more colour variance and a lot darker darks. But the detailing of the face is really very, very nice already!

And while your rendering of the hair works quite ok, rendering hair with tons of tiny lines isn't a good idea: Your lines will never be thin enough to actually represent single hairs but on the other hand are too thin to reperesent whole strands of hair. One should try to think of hair as clumps and the like and try to simpify it plus add a few details in important areas afterwards. Simply google a few portraits done by the old masters to get an idea of what I mean.

And since the orcs are the bigger cousins of our goblins you should probably ref their ears to make that apparent.


Keep it up!
(Is your avatar painted by yourself?)
Top

Yeah, the saturation's still a bit of a mystery to me at times, but I'll try to keep your advice in mind. I haven't checked your tutorial in a while, so I can't say I'm really following it, just painting with what I've learned and experimenting on the way (can't help it). About rendering the whole thing one part at a time, I guess it's just a phase on the way of getting better. It motivates, cause you've got interesting and fun stuff to do throughout the whole portrait. Doing flats first and then slowly building up the shades to the whole character feels somehow harder, so I'll stick with the way I'm doing it now until I can better imagine and shade it as a whole. It's time-consuming, but at least it teaches something

Btw, I usually work with just one or two layers. Used to have about 5-7 before, but this approach feels easier. And no, the avatar's unfortunately not my doing, though I've made a few versions of my own as well. Haven't bothered to save them.

And again, thanks for the critique, it's much appreciated. Here's a newly shaded face, all the other parts - including the hair - are pretty much WIP (posting this to prove I haven't given up yet 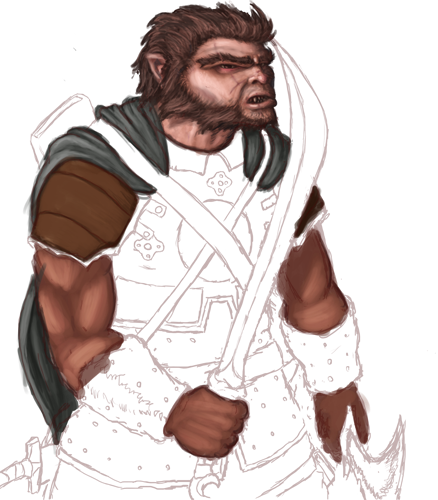 Wow, much better! Keep at it!
Top

Thanks, I will. It's still quite preliminary, but I thought I'd put it through some criticism at this stage.

Edit: crap, I've got to fix the chest-plate. It's not quite symmetrical. 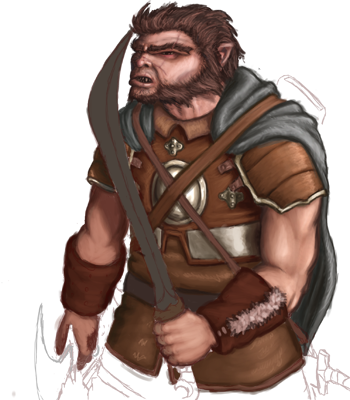 I really like the design of the armour! The armour seems to be very clean and well upkept for an orc at this preliminary stage. You could tear it some and make it dirtier to give it more of an orcish feel imo.
My computer just got back to me with a new hardrive...
Do you know the magic word,
Seldom seen and often heard?
Top

Sure, but I'll save the best for the last

. I was supposed to mention it in the last post, but forgot.
For the dark gods!
Top

I was going to suggest that it feels a little clean, too. I'd also say that your cloak looks a little... inflated... is probably the wrong word. but it looks like it's stuffed rather than being a relatively thin layer of material.
http://thespaceinvader.co.uk | http://thespaceinvader.deviantart.com
Back to work. Current projects: Catching up on commits. Picking Meridia back up. Sprite animations, many and varied.
Top

True, it's a bit puffed up. I'll redraw it when I get back to it. Illustrating clothing's been a problem in the past as well.
For the dark gods!
Top

Reference reference reference =) My portraits with any form of cloth in it tend to go through two common stages - I draw what my brain thinks the cloth ought to look like (or try to give a general idea of the layout of it), someone, usually kitty, says it doesn't look right, I take a photo and use it as reference, it works.
http://thespaceinvader.co.uk | http://thespaceinvader.deviantart.com
Back to work. Current projects: Catching up on commits. Picking Meridia back up. Sprite animations, many and varied.
Top

Whoa. Apparently we will soon have a canonical answer to the question "What do wesnothian orcs look like?".
@Antonius: I recall someone - maybe Jetrel - mentioning that wesnothian orcs do keep their equipment in good condition. They would recognize - and take - good equipment if they plunder it. Maybe the orc is just wearing his newly acquired armor while modelling for Girgistan?

@Girgistan: I happen to have a scar from a cut on my hand. It is brighter than the surrounding skin, and much brighter than the scars of your orc. Probably I'm just generalizing from a sample of insufficient size, and you have a reference/already tried something brighter and it looked bad?
The tip of his sword now appears to just touch his hair. This is not the case in the previous sketches, was this change intentional? It looks slightly strange to me, but that might be subjective.
Speaking of blades in general and blades with trailing points in particular, is this link about knives and their anatomy of interest to anybody?

EDIT: apparently I recalled something incorrect or out of date. Jetrel said the exact opposite in the Orc Portrait thread two months ago.
"Say 'Disintegrate' one more time, Vaarsuvius. For me." - OotS 626
Top

Scars look very different on different people, and on different species. They also change depending on age and environment. It ain't as simple as you think

Thanks, LordBob's got most of the orcs coming up so I guess that'll be the final look of the wesnoth orcs. I'm happy to say that he's used my and thespaceinvaders work as reference though.

Glass Pearl Player wrote:@Antonius: I recall someone - maybe Jetrel - mentioning that wesnothian orcs do keep their equipment in good condition. They would recognize - and take - good equipment if they plunder it. Maybe the orc is just wearing his newly acquired armor while modelling for Girgistan?

I think he did say something along those lines a good while ago, but maybe he just changed his mind. It was about orcs being a very martial people, and that they'd be likely to take care of their equipment (unlike goblins).
About the scars... meh, I've got a few pretty bright ones, a number of almost completely skin-toned and a couple of pretty dark ones. So yeah, it varies.
Aaand the sword isn't very finished yet, and neither is the hair. I've been taking a few pokes at this fellow every now and then when I've had the time, but not enough to post a new version. It's slow progress between spriting and my own projects.
For the dark gods!
Top
Post Reply
399 posts