Maximum damage from a single strike, or in a single turn

I checked the Eastern Invasion Campaign. There is probably no Chocobone there (didn't find it via text search in all scenario files). However, EI adds Skeleton Rider (lv1) and Bone Knight (lv2). The Bone Knight has a charge attack and -100% resistance to arcane (should probably be -50% and was forgotten). The result when charging a strong Iron Mauler with arcane amulet and a Grand Marshal next to himself (Level 4 Leader) is an incredible 156-2 retailation damage. This breaks both the theoretical damage from a single strike, and the damage in one turn, since 156*2=312. However, these numbers are both only theoretical (since there is no mainline unit with 312 hp) and you can't exploit these numbers in offense, since they are only retailation. Also, you don't even control the attacking unit in the campaign, because only the computer enemy can recruit it. These are a lot of restrictions, but I believe it's still within the definitions of the question. 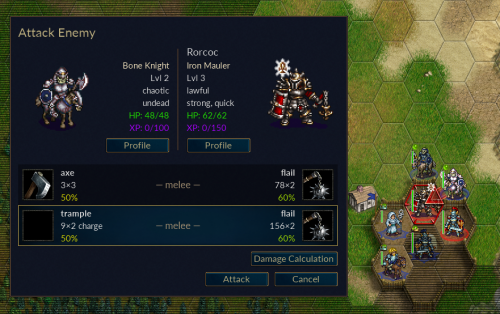 I still can't definitely say this is the max. Using a Dragon's level 5 leadership, deep underground ToD (-30%) bonus, or a bridge across lava at day (+35% ToD) might still bring up some higher results.
Last edited by patience_reloaded on April 20th, 2020, 7:14 am, edited 1 time in total.
Top

patience_reloaded wrote: ↑April 15th, 2020, 9:43 am For the chaotic side: There are a few scenarios that play "deep underground", at -35% light level. That might bring some undead units into question, but since they don't have Level 4 leaders, finding something of use will still be difficult.

Deep underground grants only +30%, not 35%. And in the deep underground in campaigns it's legitimate to use the Fire Dragon as the 5th lvl leader. Or you can a Grand Marshal xD
Top

How did you get to this? I tried this with a strong Iron Mauler, with 25% leadership and 25% time of day, and got 86 damage per strike.

Did you try with a level 5 leader ?
Top

If you search the maximum damage output that can actually be reached in one turn then consider this: Armageddon drake has 98 hp.
In the Hier to the Throne campaign You can get an ulfserker 'Ulfdain 'in the Lost General scenario. You can level it up to berserker.
In the The Cliffs of Thoria scenario you can kill the drake king with the berserker if you leadership him with a level 3 leader.
I haven't tried this possibility out, but probably we can do it. Of course, it would be a waste of xp to give the kill to the Ulfdain.
Berserker has 20% resistance against blade and drake king has 10% resistance against blade, the berserker has 50% defense, drake has 40% defense on mountains. It should be tried out at night since Armageddon Drake is lawful. 15 x 2 -> 12 x 2 at night -> 10 x 2 bc of resistance. 7 x 4 -> 9 x 4 -> leadership -> 8 x 4 due to resistance.

98 damage / single turn is not theoretical but practical maxmimum, although it is unlikely to happen, but it is bigger than killing ancient lich 80 damage.
Top
Post Reply
19 posts