Yes, some projects won't get stopped coming into the winter. And those are: encampment to stone, cutting trees, draining swamp, road building, casting rune. There is no difference between trees on the ground and trees on hills, so either would have gone through.

In the next version that I'll upload soon, turning encampment to stone will be stopped and I added planting trees to the list of projects that doesn't get disrupted.

I liked the gradual change idea and it will be in the next upload. But not as you've laid it out, instead it's random 2% of the terrain might switch in the second to last turn of any season. It might not be noticeable.

I'll upload those changes after I've playtested a couple of years to see how they pan out.

I could do more out of the buildings, and using the buildings for upgrades might be something I'll look into in the future. It is a neat idea, thanks.
Top

What if, instead of stopping them, the projects just take longer and become more expensive? It's winter, its cold. Might even make everyone on frozen terrain lose a few HP per turn.

Why just random 2%? IMO, the transition should not be abrupt, as all units start in the same place. In fact, might even make there be no time limit (would solve the missing labels) and just do these gradual changes modulo 144.

The building-based unit upgrades could just be ripped out SXC/Creep war/Orocia random mod/XP mod (if the license is compatible). Currently I am playing wild frontiers with XP and armory mods.

"an another" doesen't sound right to me, but I'm not a native english speaker:
sed -e "s/an another/another/" -i utils/tutorial.cfg

The same applies also if it is destroyed by friendly forces?
sed -e "s/destroyed by enemy forces/destroyed/" -i utils/tutorial.cfg
Top

The following message appears even if I have dozens of units spawned already: {TUTORIAL unrecruit1 _"Since most units require upkeep, there may be some times when you no longer wish to support them. In that case, move the 'un-desired' unit back to your castle, right click on them, and tell them to 'Stand down.' Note that your leader must be standing on the keep in order for this to work. You can ask any of your units to stand down, including your Peasant Workers."}

Thanks for the text corrections, they'll be in the next upload.
Do you get that message every time you recruit? It's supposed to be only once for the entire campaign. It's shown when you recruit any unit other than peasants* or heavy infantrymen for the first time.
Top

Every time the first unit of its kind is recruited, i.e. first mage, first cavalryman. I'm not sure if it was shown with heavy infantrymen, because it has been a while since the first one was recruited.
Top

ThinkSome wrote: ↑March 27th, 2020, 1:53 pm Every time the first unit of its kind is recruited, i.e. first mage, first cavalryman. I'm not sure if it was shown with heavy infantrymen, because it has been a while since the first one was recruited.

I can't reproduce this. I don't know why this happens to you.

Edit1:
remember, pressing shift during the AI turn will accelerate their movements.
Last edited by vghetto on April 2nd, 2020, 11:12 am, edited 1 time in total.
Top

I just spent a few days playing a new game to experience the new changes (except the ones on your post above) and I have to say that I really like the trade mechanic and calling for reinforcement options as they opened up new ways to play the game.
I found maintaining a huge army (which made my income 2 digits in the negative) possible thanks to a successful caravan trip. Relying on tax money from farms is slow and reliable while investing on caravan trades is thrilling and rewarding. This gave me more incentives to gain further control over the map, which also made building roads more attractive since it make travelling in winter faster. I also decided to build several 'outposts' of sort to keep the road safe from dangers (expanding the town to the edges of the map would be more optimal, but building outposts was more fun since I wanted to roleplay and 'respect' the wild life

)
Being able to call for reinforcement with just 100 gold is very useful, maybe too useful... I built an outpost near the southern edge of the map and I only needed to garrison a small army there since whenever a huge group of hostiles appeared, I could just call for help and sandwich the poor bastards. Here is a last-moment-picture for the undead before they were bashed to dead by 2 armies: https://imgur.com/a/pOshBFM . Funnily enough, a traitorous loyalist army appeared some time later and also found itself crushed in just a few turns... the power of gold was truly and utterly impressive. Silver mages were also an attractive addition for outposts since they can teleport between farms (like this: https://imgur.com/a/BN5W3sO).
Finally, the extra details such as making it snow a few turns before winter/making grasses grow near the beginning of spring was a nice touch. Though having a poor wolf staying in deep water for an entire season without drowning was rather... amusing.
Note: Regarding the changes on your post above, how about making the elve spawn stronger units instead of more units if you cut too many trees? 30 veteran elves are certainly more dangerous than 100 weak elves (and faster to kill as well). Furthermore, I think that the option to buy dark adept should be changed into rogue mage (from the mainline campaign 'Liberty') since it's very odd when your character displayed distase for necromancy yet you are able to build an entire army composed of liches without any penalties.
Top

toannghe1997 wrote: ↑March 30th, 2020, 9:58 am Note: Regarding the changes on your post above, how about making the elves spawn stronger units instead of more units if you cut too many trees? 30 veteran elves are certainly more dangerous than 100 weak elves (and faster to kill as well).

+1, was about to suggest this myself. You can make the unit count grow logarithmically in allocated gold (which is calculated from cut down trees).


toannghe1997 wrote: ↑March 30th, 2020, 9:58 am Furthermore, I think that the option to buy dark adept should be changed into rogue mage (from the mainline campaign 'Liberty') since it's very odd when your character displayed distase for necromancy yet you are able to build an entire army composed of liches without any penalties.

Why can't regular peasant workers tear down stuff on their own?

Excellent ideas as always. I was surprised myself at how fun the trade caravan addition turned out to be. Thank you for that.
And the call for help really helps me get by the first year. Yes, I'm not a good player at all

The more I play this the more I disliked the elves. I will change the way they spawn as suggested. I'll make them spawn the way other types spawn. Instead of factoring in the village count, i'll use the tree count, and it will be something like leader + level 1 sidekicks + level 2 extras with cost formula. same formula used for everyone else. (necromancers, dwarves, drakes, etc.)
I didn't know about the rogue mage, yes i'll add them. But i don't want to get rid of the dark adepts since others have figured out ways of utilizing their plague attacks to their advantage. So the dark adepts will be recruitable when a third library is built.
I really like the way your outpost looks btw.
Should I randomize where the king's troops spawn at or keep it as is from the south?

I think there's enough water in the spring, but i'll add the trees growing randomly. In the original CotF I think it used to have gryphons spawn as regular animals and were removed later on, the comment stated that they were annoying. I won't reintroduce them.
# Removed Gryphons and Dread Bats -- they are %^#@!&* annoying
Top

This message is shown when the first Blacksmith is being constructed, even though other projects have already been ordered (and completed). The helpful text should show when first project of any kind is attempted.

utils/tutorial.cfg: {TUTORIAL start_forge1 _"Your peasant workers have begun constructing a Blacksmith's forge. It will take them {FORGE_TURNS} turns to finish, and in the meantime they will be unable to move. At the beginning of your turn a number over each Workers unit will indicate how many turns remain until completion. Alternately, if you right-click on them and select the appropriate option they will give you a status update."}
Top 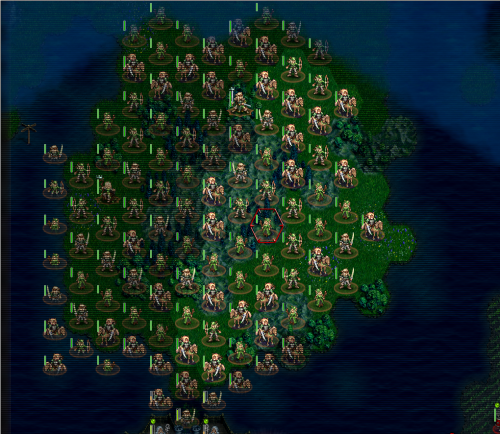 Hopefully the days of that happening again are over, were you playing on the Hard difficulty? The 30 cap was set to normal and easy only.
Last edited by vghetto on April 2nd, 2020, 11:13 am, edited 1 time in total.
Top

i was thinking if it would be possible to make the "town center" rename-able just like the towns, or when creating the keep at start being asked for a name for the town, the name could also be used in some event dialogs, so enemies/allies refer to the town by the name you have given it
Top

Since it was stated that it's a crime to shelter necromancers/liches, I think that the player should be punished for it. Maybe making it so that if you have even 1 dark adept or any more advanced version of it on the map, the kingdom will stop sending reinforcement to your town (you also can't call for help from kingdom or any other races as well)? It's the mildest punishment instead of outright declaring you a traitor for going against the law. There should be a warning about this before you recruit dark adepts (and build a zombie/liches empire) as well.
Regarding the king's troops spawn point, I think you should keep it at the south since it wouldn't make sense for them to appear from the other 3 directions. However, once the 'reputation/relationship' mechanic is implemented, maybe different types of ally can spawn from those directions instead.
Elves from the west (you must plant a good amount of trees and pay them a good amount of gifts in gold each year, plus cutting down trees will anger them even more if you were on good standing with them), Northern Alliance troops from the north (you must send them gifts/food/troops in gold each year and they can send a mixture of loyalist/outlaw/orc/troll/dwarf/outlaw/...) and Dwarves from the east (you must send them gold each year). You are already on good standing with the Kingdom so you can always call for their help.
Top

Latest update:
* Can't rename existing town center, but starting a new campaign will allow you to assign a different name as suggested.

I'd love to use the library for diplomacy like ANL. Supply the dialogue and i'll work it in.
Top
Post Reply
157 posts