Changes since 1.14.1
Read on for more details about the most notable fixes and additions in this release since the previous stable release:

Campaign changes and fixes»
Descent into Darkness: Heir to the Throne: Northern Rebirth: Sceptre of Fire: Secrets of the Ancients: The Rise of Wesnoth: Under the Burning Suns:
Multiplayer changes and fixes»
Graphics and user interface fixes»
Miscellaneous fixes and improvements»
Known Issues

⁂
The multiplayer server for 1.14.x is up and running. This server allows players using all stable releases from this series, including the 1.14 release candidates (1.13.12 and alter).

disclaimer i have skipped 1.14.1, those issues are from 1.14.0 so if already fixed do ignore.
while scrolling down the lobby first item got corrupted as such: 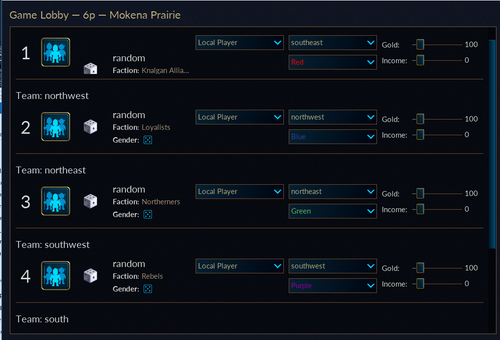 I had an [modification] which had this as its description= defined, hovering mouse cursor over the addon during game creation caused client to become unresponsive, suppose it was simply too long to be displayed in a tooltip.

Linux 1.14 is now finally available for Ubuntu in a prepackaged format and can be acquired by adding this repository: https://launchpad.net/~pkg-games/+archi ... noth-devel
Top

Eagle_11 wrote: ↑May 28th, 2018, 12:38 pm I had an [modification] which had this as its description= defined, hovering mouse cursor over the addon during game creation caused client to become unresponsive, suppose it was simply too long to be displayed in a tooltip.

I can reproduce that. For now all I can recommend is a shorter tooltip.