Welcome to the new thread for the Wild Era campaign, Dreams of Urduk, in which a tribe of orcs leave their home fleeing a coming evil, and get more than they bargained for. It's a short campaign, completable in a couple of hours, and will require the Wild Era to play.

Current Version: 0.4 (10th Mar 2020)
It is a time before men arrived on the continent later to be known as Evrosia. There, only the orcs possess language, though it is primitive at best. There is no history, for there are none to keep it. But soon, all of that may change. (Intermediate level, 5 scenarios.)

Author: turin
Length: 5 skirmish scenarios + 1 dialogue scenario
Difficulty: Unbalanced
Old dev thread: Wild Era Campaign: Dreams of Urduk
This campaign and era are in the alpha stage, and the campaign is pretty hard, but if you're keen I'd love some feedback.
Last edited by UnwiseOwl on March 10th, 2020, 5:14 pm, edited 1 time in total.
Maintainer of the Imperial Era and the campaigns Dreams of Urduk, Epic of Vaniyera, Up from Slavery, Fall of Silvium, Alfhelm the Wise and Gali's Contract.
But perhaps 'maintainer' is too strong a word.
Top

You have guards so Sord can't be killed, however Sord may leave the keep to attack and put himself in jeopardy.

The objective is to reach the swamp, but a new objective arises when you do reach the swamp. The problem is that you may not have moved quickly enough to have enough turns to win. While the opening dialogs call for haste, there is some ambiguity whether some fighting of Sord's forces might be useful, so I would change the final line from "Just hurry." to something like "Hurry and get to the swamp before we are overwhelmed."

Also the second objective is unclear because you must reach a certain small region to win while one would expect that reaching any bottom tile would suffice.

Once you reach the swamp the scattering can make it really easy or difficult depending on where the monsters appear. I think it might be useful to place the first four monsters so they can't be all in a position to attack when the swamp is entered. I also think it might be more interesting if the single monster created each turn was not a guardian and would move toward you.

This scenario has few opportunities for gaining XP. A possible change would be to have Sord's castle above the river and only guardians present at the beginning. Thus the powerful attack on the good guys would be delayed. Then have perhaps five or six units showing up below that the good guys have to
fight through to get to the swamp.


Scenario 3--swamp
"Kill as many monsters as possible" makes no sense as an objective for victory. Change to "Gold bonus for number of monsters killed"

First attempt, first turn: didn't move Soma and a monster came out and killed her.

Scenario 4--river
I don't see any advantage to recruiting a thrower rather than a sparker or stabber.
I usually play on normal level for mainline campaigns. Here I am playing easy level. I have so far decreased enemy gold to 250, increased Rasduk gold to 180 and am still losing.
rmj
Top

Appreciate it, rmj.
I'll keep those in mind when next revise this campaign.
Maintainer of the Imperial Era and the campaigns Dreams of Urduk, Epic of Vaniyera, Up from Slavery, Fall of Silvium, Alfhelm the Wise and Gali's Contract.
But perhaps 'maintainer' is too strong a word.
Top

You know Owl...I am always a great fan of the "campfire UMC series" campaigns, and I mean no offense to make such a comment. But this time I am really unsure whether it is the turin oringinal work, because this campaign is a really less-than-flattering one. Comparing to those legendarily (at least finely) made Imperial Campaigns, this campaign is very BORING and unappealing. Its quality is so low. The scenerios plots and units(spirtes+abilities+animations, actually no animations at all) are all rather dull, and the era itself looks terrible as well.

Let alone the scenerio balance is not very good (I am stating it circumbendibusly...), I could hardly make myself playing it.

I am not sure whether I misunderstood or missed some points in it, but from its appearence and the shallow meanings of the plots, I guess this one is definitely a failure of his series.
Last edited by AxalaraFlame on November 22nd, 2012, 11:27 pm, edited 1 time in total.
Top

No offense taken. It's true, this campaign is pretty primitive. But then again, it's about stone-age orcs, so I have a more than passing suspicion that this was a deliberate attempt for flavouring the campaign to feel primitive on Turin's part.
Both it and the era are also works in the early stages on development, as indicated by their low version numbers. Dreams of Urduk is on version 0.0.2, in other words, Turin posted the original and then I ported it, and so it's had no real development since it was originally posted. I feel like there's a little bit of potential here, which is why I posted it in the first place, but ultimately the main point of this campaign is to tell the story of the past of Orbivm and the events leading up to the Imperial Era, rather than be a ground-breaking campaign in its own right.
And yeah, the lack of animation sucks. Feel free to do some and I'll add it in

Thanks for your feedback.
UO.
Maintainer of the Imperial Era and the campaigns Dreams of Urduk, Epic of Vaniyera, Up from Slavery, Fall of Silvium, Alfhelm the Wise and Gali's Contract.
But perhaps 'maintainer' is too strong a word.
Top

Yeah I see. Too bad it scarcely let me associate it with the Imperial Era, since it is too ancient and too primitive.

Just keep it in wesnoth museum, and let the new players see what do our founding fathers make.

Hehe...that's probably a bit rich.
After all, the campaigns that the 'founding fathers' made are all there in the mainline campaigns

Maintainer of the Imperial Era and the campaigns Dreams of Urduk, Epic of Vaniyera, Up from Slavery, Fall of Silvium, Alfhelm the Wise and Gali's Contract.
But perhaps 'maintainer' is too strong a word.
Top

Thanks for checking out the campaign, I'll try to take a look at the issue for you.

It's still working okay for me. Which version are you running?
Maintainer of the Imperial Era and the campaigns Dreams of Urduk, Epic of Vaniyera, Up from Slavery, Fall of Silvium, Alfhelm the Wise and Gali's Contract.
But perhaps 'maintainer' is too strong a word.
Top

I added a save-game from the fourth scenario, where you can see that all non-hero units have no name (or an empty name), and no traits.

Might be that it is a Wesnoth bug instead of your campaign's one, but I just tried to start a mainline campaign and there the recruited humans have names.

I also added a screen shot of the third scenario with a Tentaculate without image. 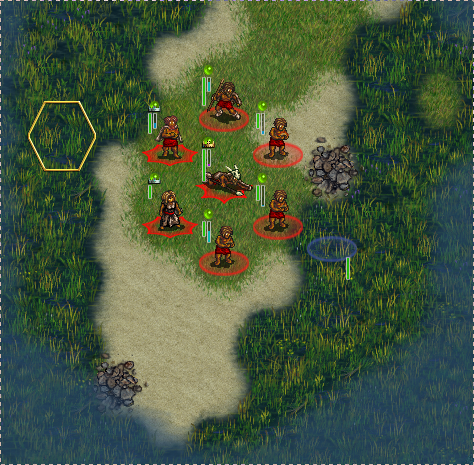 Okay, I think I got an idea about the images:

But the image is named "tentaculate.png" (in lowercase).

On case-sensitive file systems like I have here, this is a difference. I guess you are on Windows or Mac, where looking for a file in either case works.


For the names, I don't have an idea yet, but I noted that the same happens if I start a multiplayer game with Wild Era. (The monsters also don't have any names, but I guess this is to be expected.)
Top
Post Reply
11 posts • Page 1 of 1