Forum rules
Before posting a new idea, you must read the following:
Post Reply
71 posts

I don't know why I made this, but I already know this is the worst kind of ship. 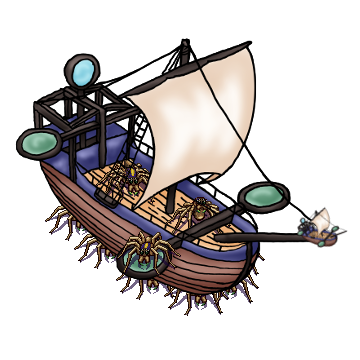 @ ForestDragon: For landing on water I would turn the lower 3 planks transparant. Your second entry is lacking the water? The green stuff has stacking errors. I would go for the version with the furting dragon.


@ GoatGoat: The spider version would be nice for the desert? Wellcome to the competion.

I found some rule books: Abney Park's Airship Pirates and Calidar-Stranger Skies. They having some floorplan of skyships. I still prefer the simpler, smaller crafts like mentioned in the lone wolf series.
https://www.kickstarter.com/projects/am ... of-calidar

An asymetric game about airship fleets: 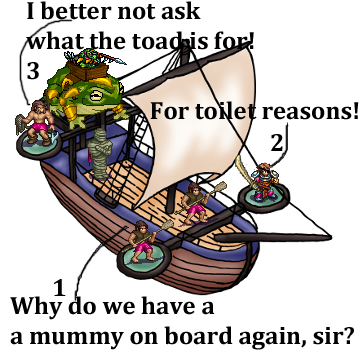 The future belongs to those, who believe in the beauty of their dreams.
Developer of: Trapped, Five Fates, Strange Legacy, Epical
Dungeonmasters of Wesnoth, Wild Peasants vs Devouring Corpses
Top

@ ForestDragon: I could give a description on how I made the ship. It would work well with all kind of game related art. In case you or anybody wishes to give it a try.

About the ship. I picked the blue reling from a topic of Heindal. There the ships had blue runes writen on the hull. 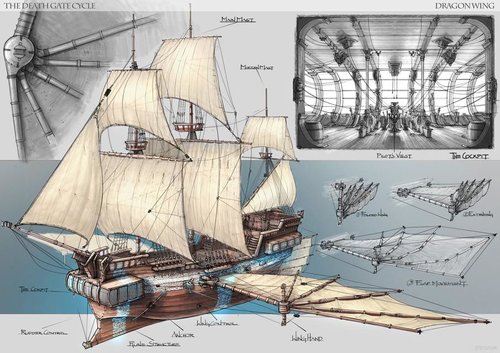 Cool, so they really had pictures for these air ships. They look way better than I've imagined them.
The future belongs to those, who believe in the beauty of their dreams.
Developer of: Trapped, Five Fates, Strange Legacy, Epical
Dungeonmasters of Wesnoth, Wild Peasants vs Devouring Corpses
Top

Since that skyship is allready in use here the version for a submerged hull. 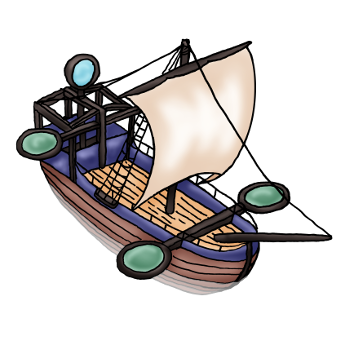 Thanks for creating this new ship. I've embedded it into my campaign as a kind of a test to compare it with the other ships.
I've should have asked before or at least tell you.
The future belongs to those, who believe in the beauty of their dreams.
Developer of: Trapped, Five Fates, Strange Legacy, Epical
Dungeonmasters of Wesnoth, Wild Peasants vs Devouring Corpses
Top

Not quite a flying ship, but a flying boat (earlier, later) plays a role in the Webcomic "Everblue".
Top

Awesome links! Thanks a lot! I would take them as skyships. Medieval ships tend to be smaller anyway. Basically the boats of Columbus would be high tech.

In case anybody still reading this:

Sails are awesome to put sigils! 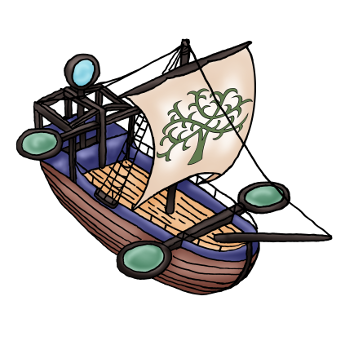 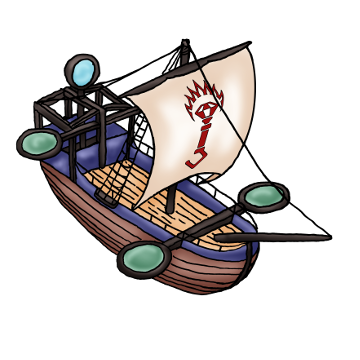 Here my take on a magic sigil on the sky ship. I made the ropes light grey to match the other ships, too. 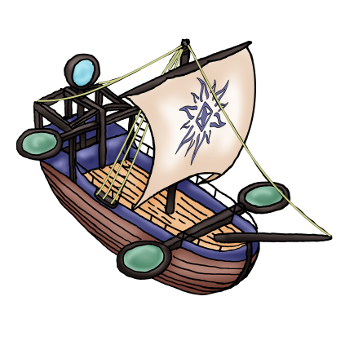 
I might need some advice on the distortion tools in Gimp from a profesional artist. The shortcomings are kind of obvious with a round sigil.
Top

So, this sky ship is quite good (if a tad garish), but I just have to ask – why does it have to be magical? It would be totally possible to take a regular sailing ship, remove the masts, and strap the hull to a blimp (or even a dirigible, but blimp is easier since it's not rigid) to produce a viable airship. (Okay, it might not be quite that simple due to the dangers of high altitudes, but I think that problem is also not too hard to solve.) Such a design doesn't really strike me as overly steampunkish. If you want them to function equally on water and in the air, you could probably rig some sort of collapsible masts system.

Wesnoth doesn't really strike me as a high-magic setting (though it's certainly a lot higher than, say, Tolkien), so I'm not sure the magical flying ship fits all that well. Maybe I could be convinced.
Author of The Black Cross of Aleron campaign and Default++ era.
Maintainer of Steelhive.
Top

I am sure I asumed somewhere that fire/air/wind magic is pretty common. Just look at your current army and count how much units with magic fire damage are there. Levitation should be more rare.

The traditional ship design for skyship is a fail save feature in case the levitation is off. Good for crash landings and such. There is no reason for ship like design what so ever. You could animate a giant carpet if you wish.

Blimps will ease the requirements for levitation a bit. Wind in your favor is mandatory, if you want to get somewhere with a baloon. Please keep in mind how big the blimp would have to be in real physics. Everything else would be magic.

Since there are only a handfull of skyships around, the design will be asumed to be somehow conservative. But their is allways room for innovators.

Lets asume you have 4 crystals to fly. You need 3 for controled landing, 2 for an emergency dive with damaged ship, one for a controlled crash with total damage to the ship, but surviveable.

If you come with a blimp and somebody runs it through you might be toast. That beeing said, there was a dwavish baloon unit in an addon some time ago. I have seen flying carpet riders too. I just have difficulties to imagine a vessel as home for 5 to 10 people this way.
Top
Post Reply
71 posts