This is being released as 1.13.4, as unfortunately, a crash-inducing bug was discovered mere hours after tagging 1.13.3.

Since the 1.13.2 release back in December, our team, especially Aginor, has been working hard on a major framework change: switching to SDL 2. This allowed us to fix a significant number of old (and ancient) bugs that have been sitting around the tracker for years. For players, this means better window and fullscreen handling, smoother performance, color cursor support, and other improvements. It also provides us a platform for working on several exciting changes in the months ahead.

As this is a development version, and especially since it's the first release making use of SDL 2, we would like to remind everyone how the testing and feedback process works for these:
Read on for more details about the most notable fixes and additions in this release:

SDL 2 support»
The game now uses SDL 2 for all operations. There is still a fall-back option of using SDL 1.2, but it is deprecated and slated for removal.
Hotkeys now rely on scancodes»
The hotkey implementation has been changed to rely on scancodes over characters. This means that the hotkey configuration now uses the same physical buttons on the keyboard, regardless of the keyboard layout.
New WML Features»
Animated water performance»
The new animated water graphics introduced in 1.13.2 now consume considerably less memory. Also, water animations can now be toggled off independently from other terrain animations in Preferences->Display if they cause too much slowdown on large maps.
Known Issues

The following issues affecting Wesnoth on Apple OS X are known and they are pending fixes. Many of them require significant re-engineering that can only be done in 1.13.x development releases later, or cannot be properly addressed due to a lack of experienced OS X coders in our team. Thus, unless someone can contribute patches to address them, it is unlikely that these bugs will be fixed.

The terrain code for the desert mountains should probably be changed if it is really "Mdy" as the change-log says. The letters Y, y, Z, and z are for UMC/add-ons by convention (https://wiki.wesnoth.org/TerrainCodesWML). I think it will help avoid problems for most map editor users to keep that convention.

(Those mountains started life in an add-on, so that's how the "y" got in there in the first place. Sorry for the extra headache.)
BfW 1.12 supported, but active development only for BfW 1.13/1.14: Bad Moon Rising | Trinity | Archaic Era |
| Abandoned: Tales of the Setting Sun
GitHub link for these projects
Top

Terrain is a good example of the importance of add-ons, so how can one compile a set of eras into one era (like Ageless) and port it to 1.13.4? It seems like the terrain is encoded in a set of letters based on your post about this developmental release. In the same way that you and I have access to the alphabet, I have access to Ageless Era from the last version of Wesnoth. Can someone explain in plain English what I have to do to port an era?
I'm tired.
Top

What can I expect from that?

I was hoping the changes would make BfW feel like a contemporary windows software, meaning for me that I can drag around screens, because they frequently block the view on other things (=No); or I could get rid of the scroll bars in e.g. the recruit list, because no matter how much space there's on-screen, it just wont' display completely, e.g. Knalgans (=No).

As for the fullscreen handling, it feels worse than before. The game picks a resolution (1536x864), which is not the native resolution of my display (1920x1080). When 'Full screen' is ticked I can't do anything with the resolution list, when I un-tick it the game changes to windowed mode, I can select a resolution - and when I tick it again it goes back to 1536x864. I don't know if this behavior is caused by my set-up or the state of the development?
I have a cunning plan.
Top

Some things for the future:
at the online lobby, please rework the modifications: to display an uncut full list via mouse hover over, as its displaying only the first 2 or 3 before getting cut off with ...
allow to skip replay entirely when entering an ongoing game at the lobby,
at the game lobby allow player to re-pick his own leader and faction without having to re-join or beg the host to change it for him.
addendum: implement a way to completely turn off the "press key to continue" unit sighted during movement messages.
Last edited by Eagle_11 on March 15th, 2016, 10:22 pm, edited 1 time in total.
Remember, "Nothing flies like a Filburd!"
Top

nuorc wrote:or I could get rid of the scroll bars in e.g. the recruit list, because no matter how much space there's on-screen, it just wont' display completely, e.g. Knalgans (=No).

This raises a really good point; we should use relative window sizes. I'll work on that for the next release.

As for the fullscreen issue, I really can't say what the cause is.

The 'better handling' refers to the fixing of many long-standing bugs we had in our tracker. I can't list them all here, but in general, window handling should be better.
Creator of Shadows of Deception (for 1.12) and co-creator of the Era of Chaos (for 1.12/1.13).
SurvivalXtreme rocks!!!
What happens when you get scared half to death...twice?
Top

vultraz wrote:we should use relative window sizes. I'll work on that for the next release.

That sounds like I want it. So best of luck with it!

Does anyone else have all the color cursors appearing with an opaque white background? I am asking because I want to have an idea of how specific I need to make the bug report. 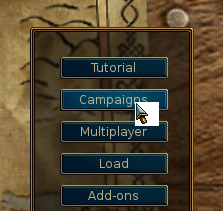 Color cursors seem to work fine for me on Windows 8.1.
I have a cunning plan.
Top

I'm running Wesnoth 1.13.4 on an old machine - it's noticeably slower and a lot more CPU-intensive than Wesnoth 1.13.2. I don't really understand all this new-fangled technology, but is this something to be expected? I.e., SDL 2 is designed for newer hardware, and if you don't have a recent machine with a modern GPU, it's going to use a lot of CPU time? 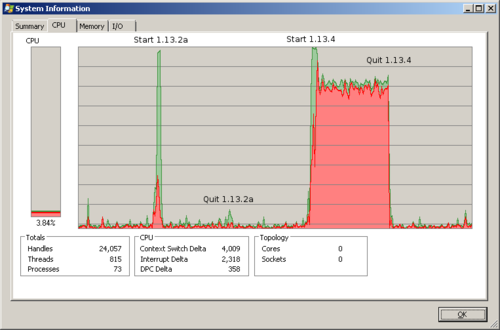 beetlenaut's problem is most likely https://gna.org/bugs/?23909. This is an upstream issue with the video drivers on AMD hardware.

The decrease in performance that gnombat reports is not entirely unexpected, but on my system the difference is much smaller. SDL2 does everything in software at this stage, whereas previously SDL 1.2 did a few things in hardware. I'm currently working on fixing some of the issues discovered in 1.13.4, and this should hopefully help with bringing down the cpu usage.

Would you be able to tell me exactly what you did when measuring the performance and your computer's specs?
Top

Aginor wrote:The decrease in performance that gnombat reports is not entirely unexpected, but on my system the difference is much smaller. SDL2 does everything in software at this stage, whereas previously SDL 1.2 did a few things in hardware. I'm currently working on fixing some of the issues discovered in 1.13.4, and this should hopefully help with bringing down the cpu usage.

Would you be able to tell me exactly what you did when measuring the performance and your computer's specs?

The CPU usage will obviously be a lot smaller on newer hardware - mine is an old machine from 2007 (AMD Sempron Processor 3200+, 1800 Mhz, 1 Core). (Although if SDL 2 is doing everything in software, I would guess that the difference in CPU usage is still measurable even on a new machine.)

The measurements in the graph above are just for displaying the titlescreen.
Knal.ga
Top

Aginor wrote:beetlenaut's problem is most likely https://gna.org/bugs/?23909. This is an upstream issue with the video drivers on AMD hardware.

Yes, that's my bug. Silly me: I didn't search gna for "colour cursor". Wesnoth joins a growing list of software that used to work but has recently stopped working with "Won't fix: AMD's fault." Is there anything I can do about this?
Campaigns: Dead Water,
The Founding of Borstep,
Secrets of the Ancients,
and WML Guide
Top