I was trying to come up with some monsters and wildlife for the frozen north. Polar bears, yetis, aaand... ice-dragons (?) could be good, but they are big beasts and don't make good level 1-3 units. But are there others, that are smaller? Are there any northern animals that would be useful for other campaigns or eras?

I've got a start on some wolves. I'm not a fan of the mainline wolves (they remind me of opossums), though I understand why they are as they are[*]. The units with blue stuff are not really part of this, but if there is some generally accepted lore for the frozen north, maybe it could be relevant. If not, never mind them. 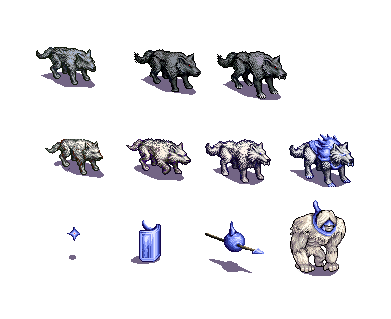 [*] - they look good as part of the goblin riders, and one wouldn't want to change them much from that.
BfW 1.12 supported, but active development only for BfW 1.13/1.14: Bad Moon Rising | Trinity | Archaic Era |
| Abandoned: Tales of the Setting Sun
GitHub link for these projects
Top

Hmm, most far north type critters would be mammalian beasts. Bears and wolves are pretty much a given, you could also do stuff with wolverines and other (enlarged) mustelids as far as predators go. Giant eagles and owls could work for flying monsters. A lot of creatures identified with extreme cold are connected to the sea as well. Leopard seals and giant crabs could be pretty dangerous. You could also go the Warcraft route and just make animal-people of any and every arctic/antarctic animal you can think of.

As for folklore creatures, a lot of them would be intelligent. You could do something with the wendigo which i suppose would be some sort of ice ghoul. Selkies are a magical people who shapeshift between seal and human forms by casting off their sealskin 'coats'. Some sort of generic snow/ice elemental maybe.

Just throwing out ideas, hopefully some are useful.
Top

I've been looking for some decent ice wolf and ice bear sprites for a while, so if you make these I am totally going to steal the bears for the IE.
Maintainer of the Imperial Era and the campaigns Dreams of Urduk, Epic of Vaniyera, Up from Slavery, Fall of Silvium, Alfhelm the Wise and Gali's Contract.
But perhaps 'maintainer' is too strong a word.
Top

what about an ice weasel, license is "CC-BY-SA-3.0-MIGRATED; Released under the GNU Free Documentation License."

someone just has to remove that silly irdyaball

I sense someone is being less than serious...

I'm not very fond of the "bears and wolves as monsters" trope, really. If it's a fantasy world, there's a lot more room for more original monsters than that.

The pleistocene epoch is a goldmine for ideas (google for "pleistocene megafauna" for more). Some of the animals that have existed in prehistoric times are quite outrageous, so I wouldn't recommend sticking to boring animals like wolves, bears and walruses.
Top

Appart from wolves, grizzly/polar bears and wolverines, you could also name pumas and lynxes. Maybe giant Snowy owls? Mooses, giant racoons or beavers among less-predatory animals? Mammoths could be awesome too. And/or sabertooth tigers? Walruses? Just throwing ideas around

Maybe these animals would behave kinda like real animal and less like monsters, that is not run around the entire map to grab your units, but only attack if one of yours walks within ~3 hexes of them?
Jazz is not dead, it just smells funny - Frank Zappa
Current projects: Internet meme Era, The Settlers of Wesnoth
Top

reminds me that we don't have owlbears.
campaign ruthless in your nearest 1.11 add-on server
some wesnoth-related drawings
Top

One important consideration is to make units different. Monsters which only have a blade melee attack and nothing special to them are more or less just copies of each other, so whenever possible I'd suggest favouring units which can have a specialty of some kind; charge, skirmisher, steadfast, poison, unusual attack stats or movetype, magical properties, etc.
Top

zookeeper wrote:If it's a fantasy world, there's a lot more room for more original monsters than that.

Yeah, I think I'm going to stick with making them mammals. So, no insects or lizards.

I have a first crop. I don't have .cfg or even names for them yet. Yeah, they all have the same colour pallet, I'll change it later. 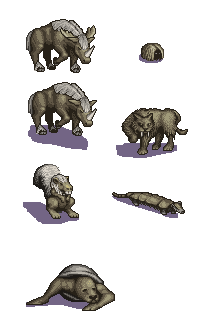 The horse-rhino thing was originally going to be a big elk-like beast, but I screwed up the horns (as seen in the one without a shadow), so it got a rhino horn. I may get rid of that horn. Needless to say, it'll have "charge" ability.

The one below that is supposed to be a big beaver/kangaroo/squirrel thing, hopefully it is readable enough. I know the tail sucks, I'll get that ironed out. The idea behind it, aside from just being ridiculous, is that it has engineering projects, like beavers, so it builds fortifications and appears organized and sentient, rather than wandering around like a deer.

The cat is supposed to be a sabre-tooth or something, nothing too original.

Below the cat is a weasel, but instead of an ice-weasel, it is an armored weasel. Maybe it can curl up and roll itself around, or maybe it is just resistant to damage - depends upon how much stomach I have for animating it.

The bottom-most thing is either more creative or more hare-brained. It is sentient, but solitary and territorial, so it has no society or technology. It can use magic. It has low movement, maybe restricted to certain terrain near water.

The little thing in the top-right is small and furry and I'm not sure if it is really anything.
BfW 1.12 supported, but active development only for BfW 1.13/1.14: Bad Moon Rising | Trinity | Archaic Era |
| Abandoned: Tales of the Setting Sun
GitHub link for these projects
Top

Good going. The only thing which looks off to me is the beaver/kangaroo/squirrel thing's, which seems like it should be a lot smaller.

The weasedillo is my favourite. Could it have a venomous stinger?

The top right furry thing could have an ambush skill, hiding under rocks or something. Maybe some venomous spit as a ranged attack?
Scottish Gaelic Translation of Wesnoth
Top

Backstab doesn't come up often. The little guy could have ambush and backstab.
GambCiv | Tweet Tweet | My IRC Channel | Some of my projects
Top

Dat squirrel... I swear, something about it really reminds me of a certain relative of mine, eerily enough (a distant relative, thankfully!). Its left (our right) foot seems like it should be slightly more horizontal... i.e., not at the exact same angle as its other foot.

As for that little fuzzy thing, I don't know if you've ever read the Edge Chronicles, but it reminds me of the 'Wig-wigs' in that series:
Spoiler: 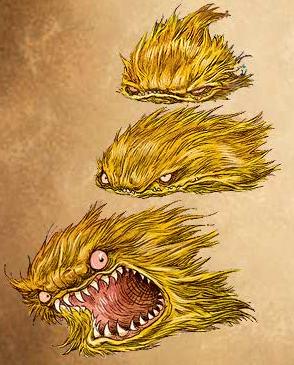 http://en.wikipedia.org/wiki/List_of_animals_of_the_Edge_Chronicles wrote:[Wig-wigs] lack legs or any other appendages, resembling small wigs with eyes. They are orange and fluffy, very cute to an unexperienced eye. They soon show their dark side when they practically split in half to resemble a bear trap, and clamp their fearsome jaws upon their unlucky victim. [...] Wig-wigs are very dangerous creatures, due to their tactic of overwhelming prey through sheer numbers.


The cat and the horse-rhino thing are really impressive.

"I'm never wrong. One time I thought I was wrong, but I was mistaken."
Top
Post Reply
33 posts