Boucman wrote:if you are talking of the TC lines, it's a harness. (no real purpose or historical precedents, we wanted to have TC at different places for lvl0 and lvl1 to help unit difrerenciation)

Given that it seems to be a trained hunting bird, wouldn't a hood make more sense? It'd be easier to see, too...
Age of Trials MP Era - Map pack
Top

It probably would, but I think you'd run into similar difficulties with interpretation. I'll take another look though.
http://thespaceinvader.co.uk | http://thespaceinvader.deviantart.com
Back to work. Current projects: Catching up on commits. Picking Meridia back up. Sprite animations, many and varied.
Top I have leveled up.

It's been a long time and I feel inspired to improve that what I once started and TSI kept working on. There's many ideas brewing in my head that would be fun to realize...

The Khalifate unit tree is not set in stone and is up for change right? If it would make it more balanced. My intention here is to crank out my new versions of the existing unit lines as well as new units that might be interesting. Whether they end up being used in default is moot, as I enjoy making them and they might end up in campaigns... That is if I keep up working on this. 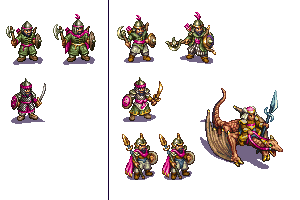 ...Wow. Was not expecting this. The wyvern rider is epic.

I don't really have anything critique to offer here, other than that the wyvern's back leg seems just a little muddled with its wing, but I'm not sure how you'd go about fixing that. It's probably not even worth bothering with, TBH.
"I'm never wrong. One time I thought I was wrong, but I was mistaken."
Top

Yes, this is an excellent work. And the wyvern is impressive too.
Top

You just keep raising the bar.

Awesome work - you have a way with dynamic poses, and I love how detailed your designs are.
Top

Wow, I've gotta study some of the techniques you used here. The wyvern's head-neck area is amazingly readable for all the detail you packed in, and I'd love to see the unit get in! (It'd definitely shut up the people complaining about a lack of fantasy flavor in the Khalifate for sure.)
UtBS revision spriting.
To The Zeromobile!
Top

Now the khalifate are good!!

(Is speechless as he sees the awesomeness of the Wyvern Rider)...
Creator of "War of Legends" and "Hero of Irdya: Book I."
Former-Maintainer of Start of the War
Maintainer of Forward They Cried
User:Knyghtmare-:-Friend me on Facebook-:-Follow me on Twitter
Top

TSI: Since I started this I've been somewhat attached to this faction and have had some visions for it... That's why I'm doing this. If it weren't for your efforts it wouldn't even had been played in mainline yet. I know you made 2 animations already so sorry for that.

Artisticdude: There's some things in my mind to improve the wyvern with... I'll probably try to address the leg too. The sprite needs an "in flight" mode too like the drakes when over water etc, I'll make that as well.

Zero: I would think partly it's because of the largely varying colors of the different material parts in that area as well as proper display of shadows. Dunno what else to say about that. I keep whittling away at stuff making tons of small edits until I can get it as good as I can, like many others do I would presume - unless you are speedpainting.


Added Batac and a bit of a different approach for Monawish, could be a different unit too if not really fitting. 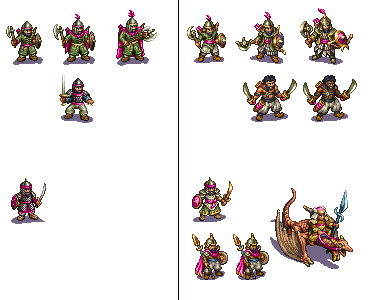 The magenta thing the rider is holding (called 'reins', I guess), is curved in such way near the hand, that it looks stiff.
If that was not the intention, a more flexible band would assume the main curve much closer to the hand.

What is the material of the rider's clothing?

The two units top right are holding the bow and the shield in same hand (it took some time to figure that out for the rightmost unit, wondering about the strange shape of the shield).
I have some doubts about such combination working well for neither using the shield nor the bow.
What did they really do with shields in such cases, did they hang it on the back, or something else?
campaign ruthless in your nearest 1.11 add-on server
some wesnoth-related drawings
Top

amazing -
unfortuanately i saw this thread to late - else the wyvern rider would have made it directly into my new Map.

homunculus wrote:The magenta thing the rider is holding (called 'reins', I guess), is curved in such way near the hand, that it looks stiff.
If that was not the intention, a more flexible band would assume the main curve much closer to the hand.

As the head of the wyvern is roughly at the same elevation as the hand I don't see why the reins should be as you describe...


homunculus wrote:What is the material of the rider's clothing?

The brown is leather, hat is cloth and the white pad things are mystery material. Most likely dyed leather too, but its up for interpretation.


homunculus wrote:The two units top right are holding the bow and the shield in same hand (it took some time to figure that out for the rightmost unit, wondering about the strange shape of the shield).
I have some doubts about such combination working well for neither using the shield nor the bow.
What did they really do with shields in such cases, did they hang it on the back, or something else?

In this link there's a big discussion about that with links to historical data. When you gave the question I did read up a bit but not all that is there. I found that this was on the whole not the way it was done, but some did use a buckler strapped to the forearm while using a bow. Originally I designed the units similar to how they were represented in the game Medieval2:TW. That is, still carrying the shields while firing the bow, just the look of it was cool to me.

For the lvl3 I decided to make a special shield with an integrated bow- some fantasy stuff. Just how effective that would be in real life I don't know.

Some more stuff. I think it is self explanatory what kind of units they are. 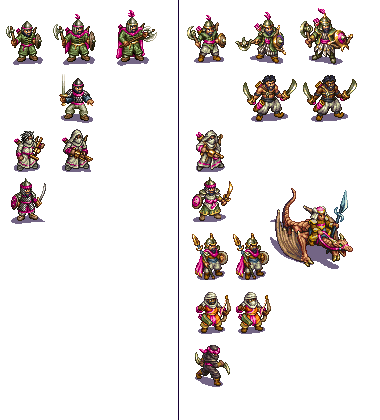