Forum rules
Before posting critique in this forum, you must read the following thread:
Post Reply
258 posts

If there's a significant size difference between my sprites and others it's probably because mine are too big.
Upper part of his boots (I don' know how it's called) looks trianguar, while it should be more round. Maybe it's just the highlight location. Our right hand looks like it's attached to his ribs rather than his shoulder. When your sprite is turned this way (Facing right), his right shoulder should be a bit higher than left one.

Mainline sprites are drawn as seen from above, and you drew this one as the viewer was on the same level.

The only big issue is the arm, and maybe the left shoe. Apart from that, it's a good one.

Dixie: Yes, Samurai will get a banner - I just didn't want to put to much stuff on him now. The blade was drawn to fit the 72x72 image, I'll extend it and redraw the blade.

I'm not sure when I'll have the time do draw this, I have some RL stuff.
Top

It's okay, I'm actually pretty busy myself, so I can understand

@ Dipsey: The sprite is actually pretty cool and has much potential, good job! As Kanapka points out, there might be the right arm/shoulder thing, and another one that's bothering me: the straight black line that follows the gun and strikes through his hand. And I guess it should be the Cow Puncher, which is a level 1. I haven't really compared for size... Is he small for a mainline human lv1? It's hard to tell just like this, without reference. Compare it with a lv1 ninja or the lv1 pirate, perhaps, if you want.

Keep it up, guys!

Thanks... Btw I just got IME from the server last night... It looks great!
- Dipsey
Top

dipseydoodle:
cow-puncher.png:
I think the barrel is too short - it looks like it starts in the point where he holds the rifle, and I think it should be a few pixels longer. The rifle looks like it was behind the arm, maybe because it has less highlights than the arm holding the rifle, though it would take someone better than be to tell the reason why. Except for that, I think he's ok. Are you going to fix the farm-hand unit (just the feet and the arm)? It'd be nice to have him in. I've just noticed that neither of them has TC, it'd be nice if you added some.

Buccaneer (or whatever the L3 Gunner's name is):

Just the feet and the coat are complete, the greyish thing near his neck will be changed, and maybe the rifle will have to be shortened. Comments would be nice.

Man, Dipsey I intended to reply to you and I totally forgot. I am so sorry. Your sprite definitely shows potential, although I think it lacks definition overall. The arms and legs are a bit short and chubby, too. I like the head and hat. The gun looks weird, the top-right part is very jagged. Almost looks like an axe or something. But yeah, great potential

I don't have much time, so I,ll just put up a few comments/remarks about your sprite, Kanapka. It's coming well, still:
- I'm not sure if I feel like his feet should be inverted (i mean, have the right one be lower than the left one). But I'm not 100% sure about this.
- Maybe his feet are a tad small?
- I'm not sure if the cloak's color is too much of a change since the lv2's gray-ish one.
- The back of the cloak should show between his legs.
- Is the gun gonna be a bit big? Or are his arms a bit short? I dunno.

Keep it up you guys!

Thanks again for your contributions.
Jazz is not dead, it just smells funny - Frank Zappa
Current projects: Internet meme Era, The Settlers of Wesnoth
Top

I could always redraw it again see if it's any better that way.

But yeah I'll make some changes till then.
- Dipsey
Top

Possible sketch for the cannon icon. When I looked at photos of cannons, the ends of most of the ones I saw were really more like a series of cylinders than curving out. I liked the flared end, but I could certainly change it. Also, does it look like a good angle for it? How quickly it widens towards the base is wrong, but I'm planning on cropping it closer anyway (probably the second band won't be visible). And imagine the cannonball's a bit bigger, too. 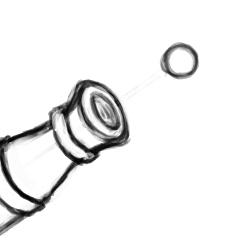 Also, if anybody can tell me if I messed up the perspective or something, I'd appreciate it.

I guess this is a good time to ask: how realistic or exaggerated do you want the icon pics to be? I've only looked at a fairly small pool of refs, but the weapons I've looked at so far look more... normal than I expected. The cutlasses had angled ends, mostly were just short, and the blunderbusses had flared ends, but it was pretty subtle.

Relatedly, here's an attempt at a pirate's sword I drew before looking at any refs, it turned out like a cartoon scimitar (*was* pretty disappointed when I went searching for cutlasses and related swords)

But, maybe there's a use for it. 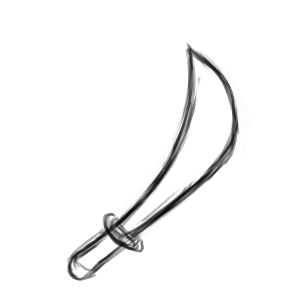 About the attack icons, I dunno. I suppose it would be nice if they blended in somewhat with mainline, since I'm probably gonna use some of them too, but do as you think, I'm not gonna turn down something that looks good and that I need

As long as you're enjoying this.

I don't really mind the scimatar's shape, I guess it could be used as a cutlass if you want. Although maybe it could use a bigger pommel, with a hand guard, you know?

The cannon is cool, but I wonder if we should drop the cannon ball and just a big cannon's "mouth", that could be used for all kind of cannon attacks (cannonball, grape shots, etc.). Once again, you get final say on this, though, if you really want to draw the cannonball...

Sounds good to me. My original plan was to re-use the cannon image and just change the projectile, but just a big cannon mouth sounds easier, especially since I hadn't worked out how I was going to handle the grapeshot yet.

I'll tweak the scimitar-thing a little. Probably have revisions early next week.
Top

The rifle could use some smoothening, and (our) right feet is wrong, but I didn't figure out how to improve it yet. I'd say the rest is done. Please post any mistakes you see.
Top

The feet are indeed better, and I really like how the cloak turned out, good job! I'll allow myself two comments, though, if you may:

- I'm not a big fan of the face. It looks a bit naive, or expression less, while the previous pirates of that branch had some kind of mean/angry/grumpy look. I suspect it may be the eye patch's "string" that's higher above the eye. It also switched eye, although I'm not sure to which extent this can be an influence. Maybe there's also the scarf covering less the bottom of the face, I dunno. It'd be nice if you could do just a bit more about it, though

- The lv 2 (gunner) got a knife, so it'd be cool if the lv3 could keep it, if only for the sake of continuity. Unless you prefer removing it from the lv2. It can be different, he can hold it differently if you prefer, it'd just be nice if he had one. Maybe he could hold it upside down, with the blade going behind his leg? Or maybe it could be a bayonet, if you prefer? (although it would change the unit's damage from blade to pierce, logically, and I'm not too sure about it)

Anyway, really cool, keep it up!

Hopefully a better face now. When I looked at it properly, I saw that it was just a soft blob, and not a real head. I totally forgot about the knife, thanks for reminding me. Tell me if there is still something wrong.

About the Harpooner line: I have no idea how to draw a harpoon gun, and some guys are supposed to have that. Can they just throw harpoons?
Top

I think that last version will do, thanks a lot

And yeah, sure, the "harpooner" guys can just throw harpoon, forget the gun if you want

Could be nice if you could include nets, too. I'm eager to see how you can render the simpler sailor/fisherman look

Good job so far, thanks! By the way, would you be the kinda guy who'd prefer to have frequent updates to see his sprites in game as soon as possible, or do you not mind/prefer a big update now and then or at the end? 'cause I could of course update the version on the add-on server for the sprites, but I feel like they'd be very small releases. But if you'd like it, I don't really mind